I've been spending all my free time planning my wedding over here in the suburbs, but I've taken the time to sew a few non-wedding-related items here and there.

Recently, for instance, I made up the Sewaholic Pendrell blouse. 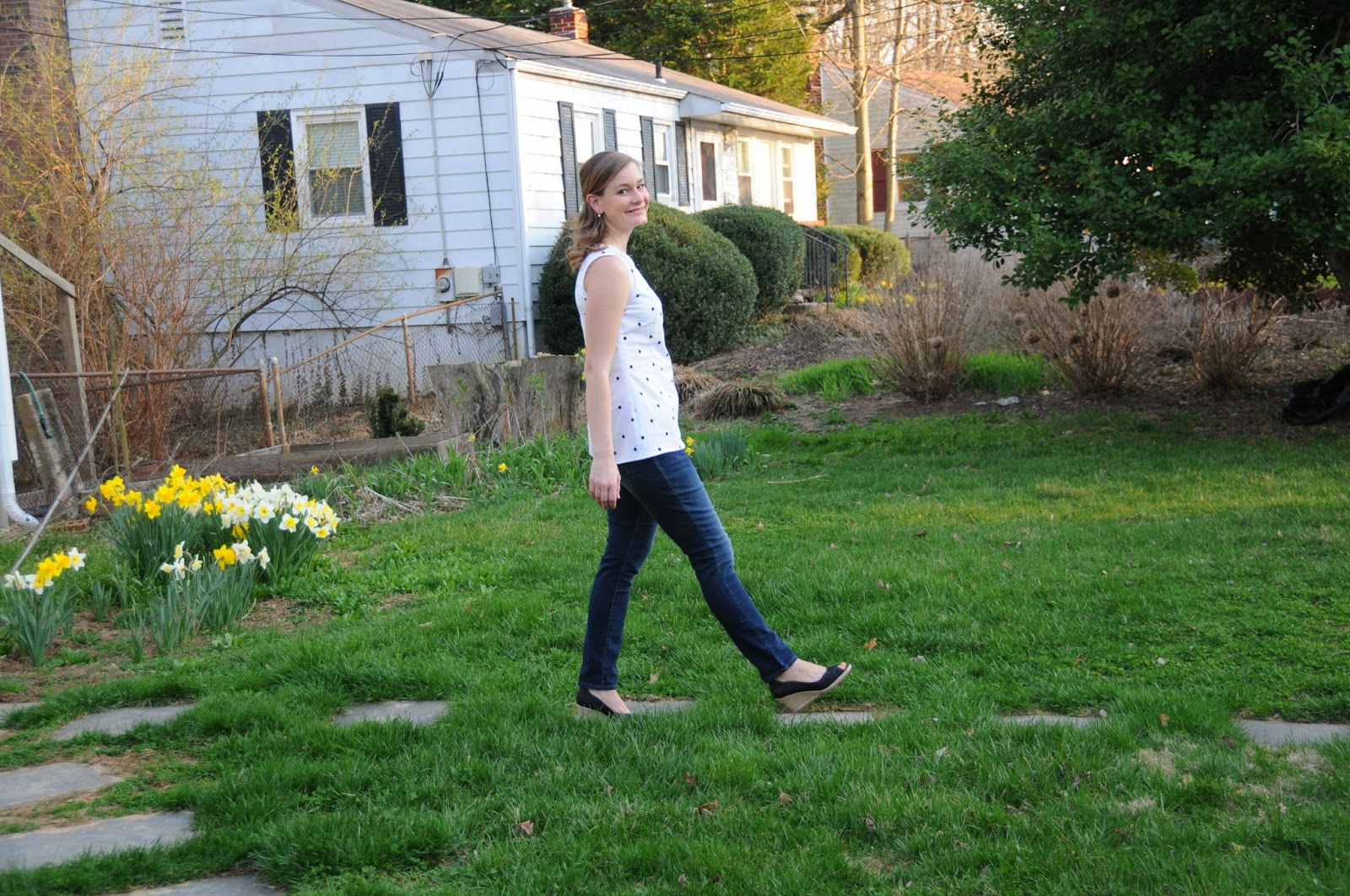 The wonderful Jennifer of Workroom Social posted a while back that she'd made a couple of muslins from her Pendrell, but it wasn't working for her. And so she offered a trade, which I was only too happy to take.

I sent her a really cute McCall's sundress pattern and she sent me the Pendrell. She's a tracer, so it wasn't even cut. 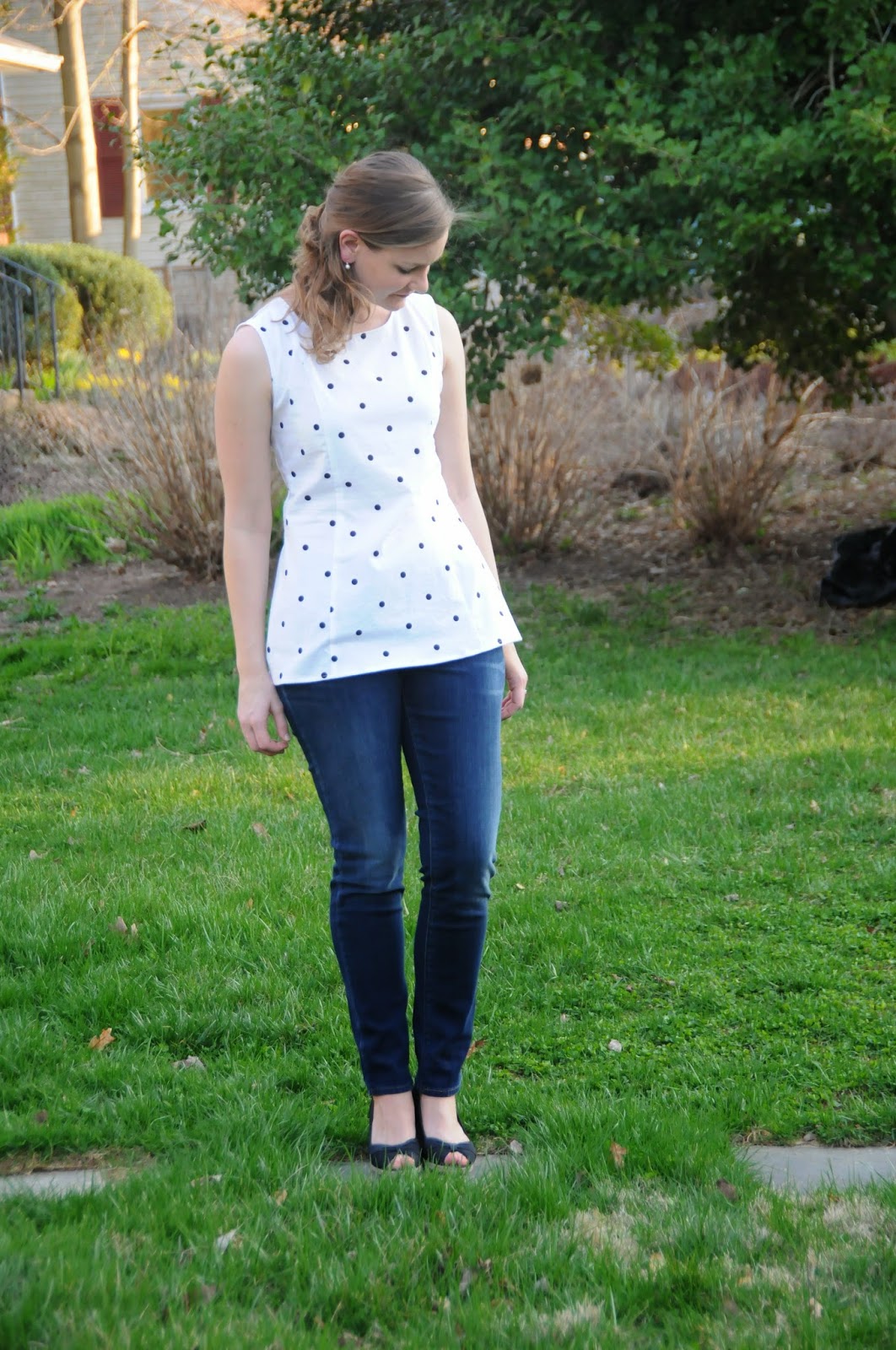 Of course you know I cut it out before I made it. Because Sewaholic always fits me and, well, ain't nobody (except Jennifer) got time to trace everything. ;-) 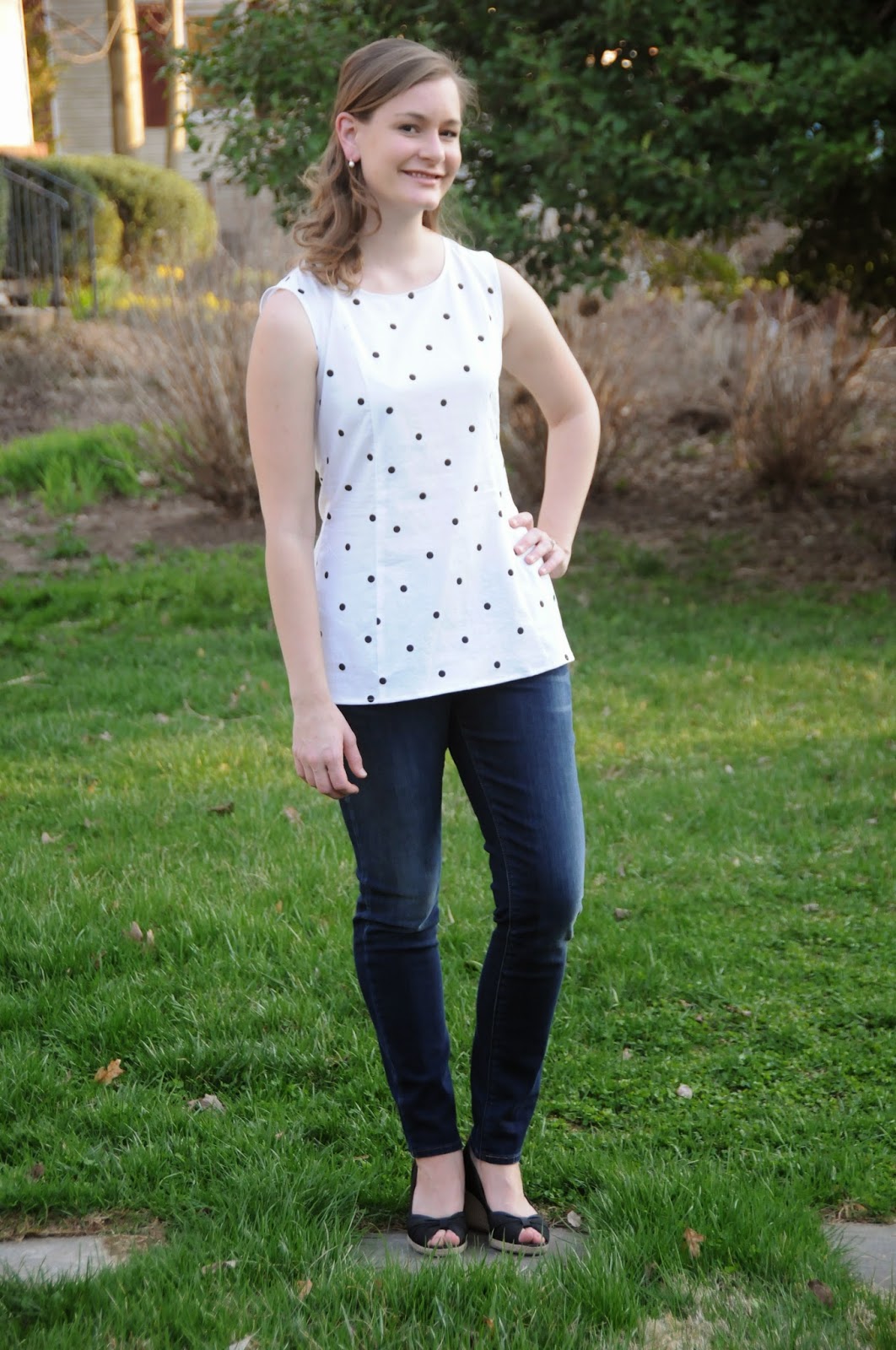 The fabric is a yard of cotton (?) from Chic Fabrics in New York.

I adore polka dots, so when I saw this one on sale for $5 a yard, I snapped up a yard for a summery top. 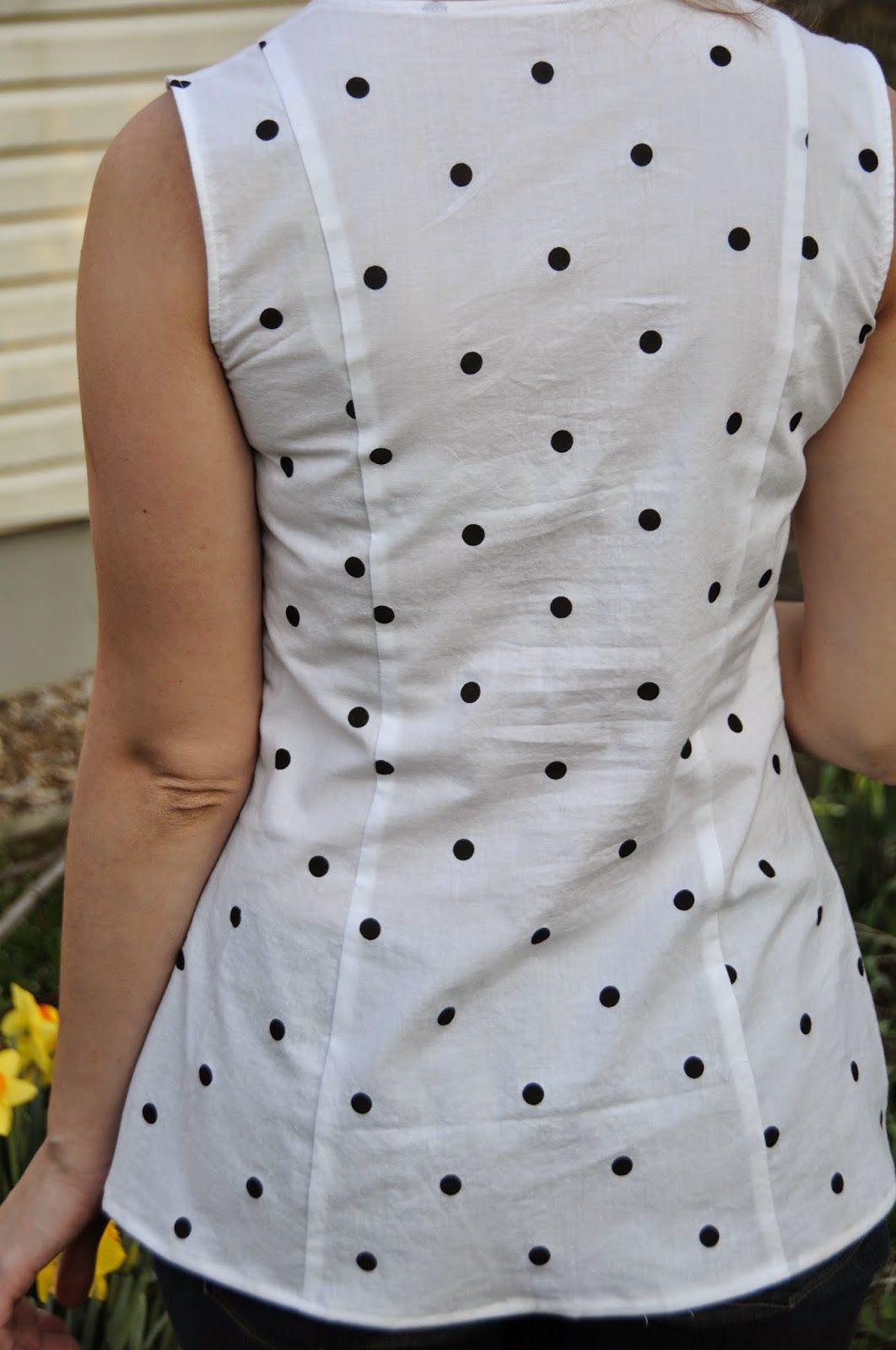 I cut a straight size six and the fit, to my eye, is great. The top is nice and long -- it hits me appropriately mid-hip. 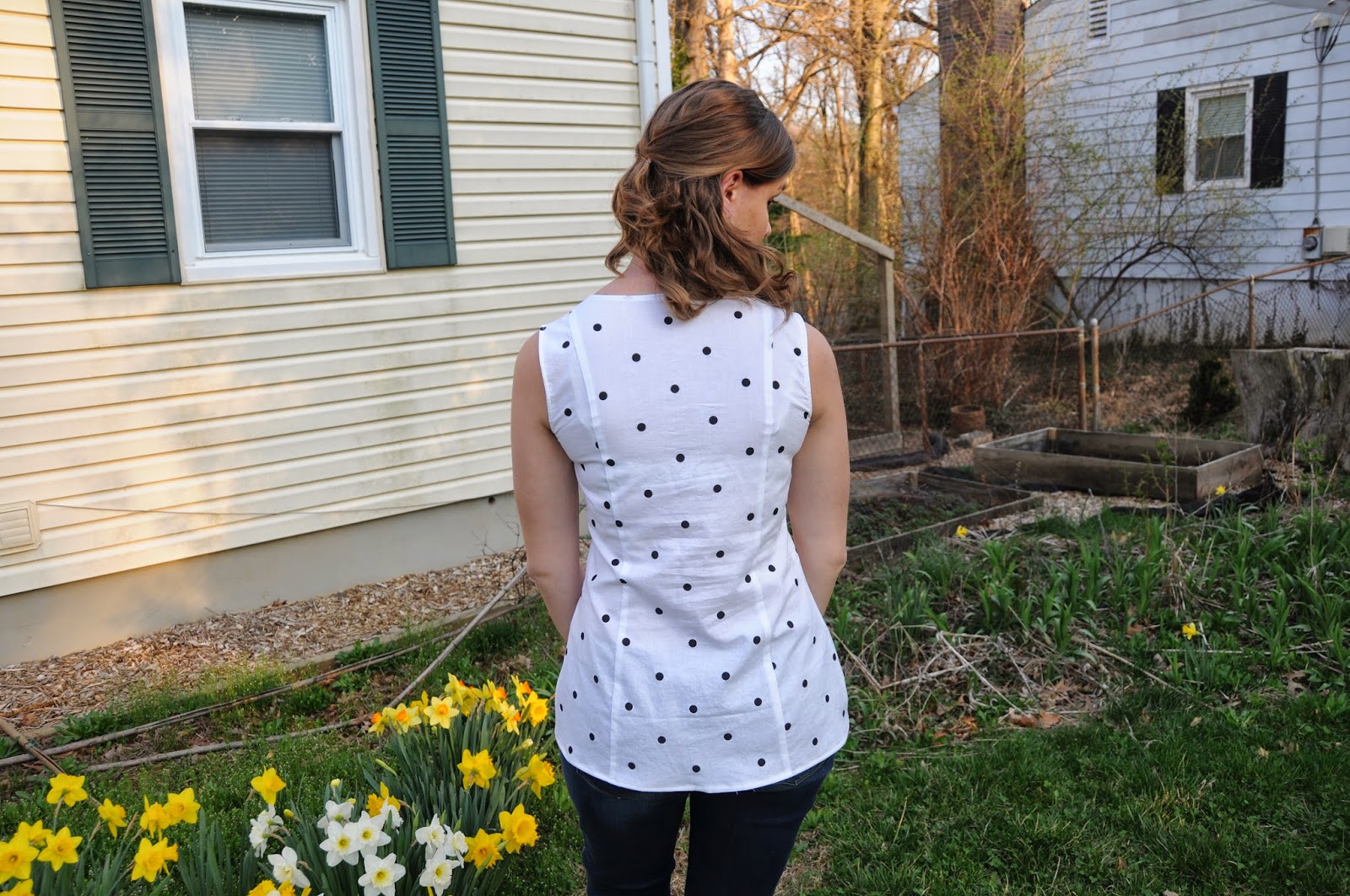 The only downside to such a great fit is that this top is a bit difficult to put on and take off. I definitely was not so smart and smudged some foundation onto the inside neckline the first time I wore this, so I need to be more careful of that in the future.

The neckline and armholes are bound with self bias strips that are turned under, which makes for a super lovely and clean finish. 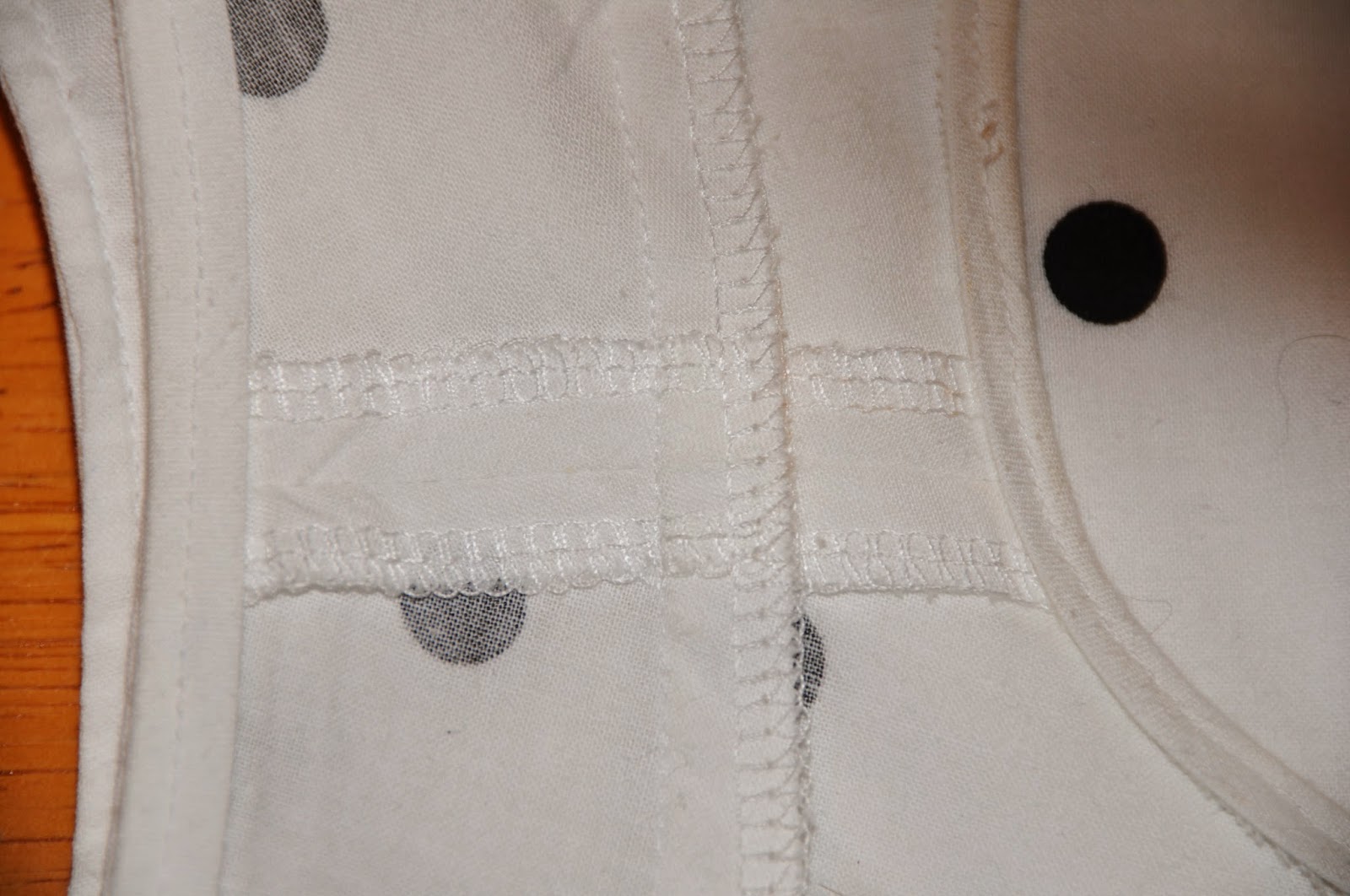 I usually only keep black and white serger thread around, so sewing a white blouse with matching serger thread made me inordinately happy. So nice and clean! 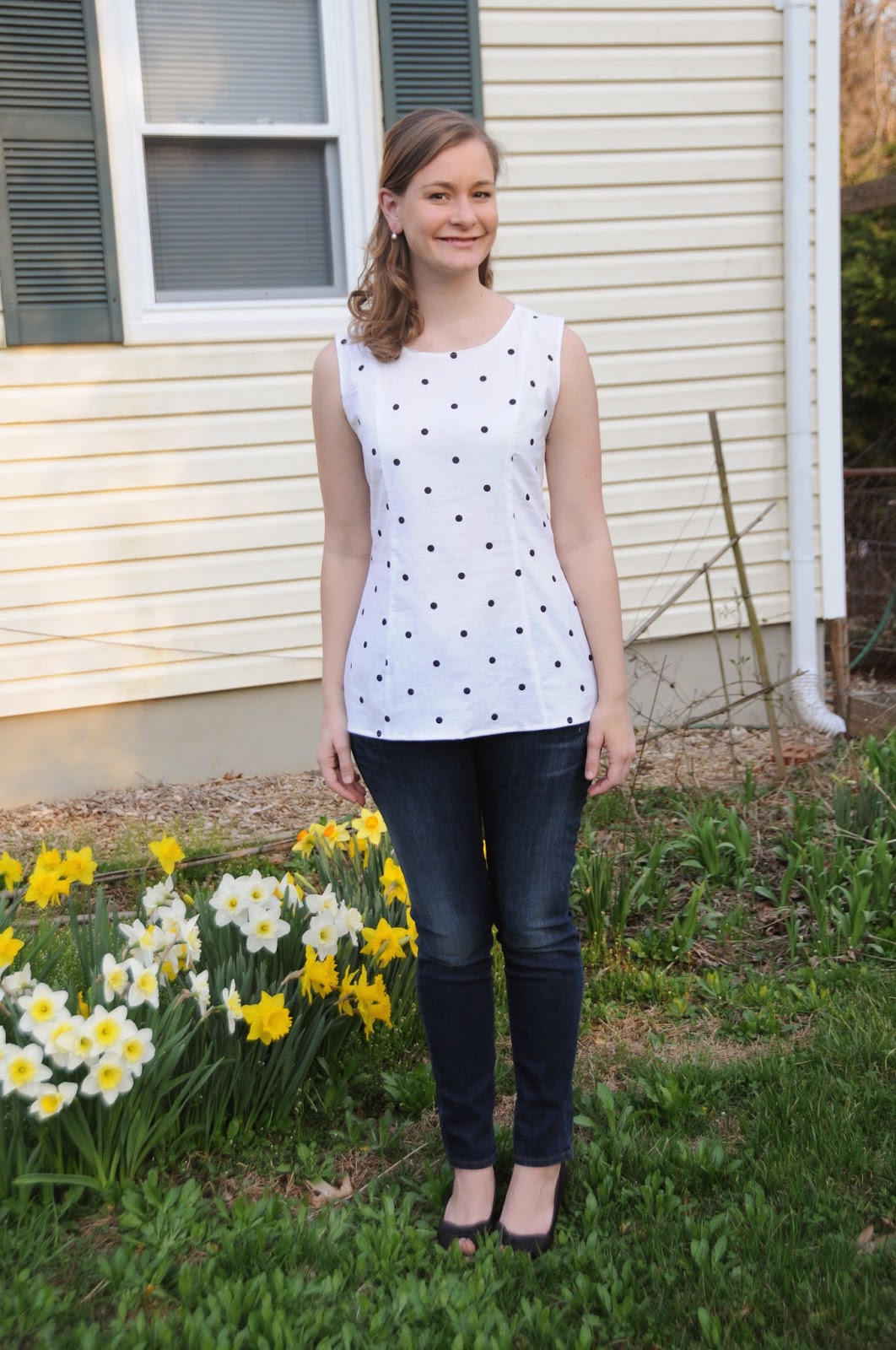 This was a great make and I've already worn it a couple times. I'm especially enamored with the way it looks with my new Levi skinny jeans and black wedges.

As a side note, I finally caved a few weeks ago and bought new jeans and I'm loving the fact that Levi's now sells jeans in relation to the amount of hip curve they have. This is the "bold" curve -- aka most pear-shaped -- style. Love! 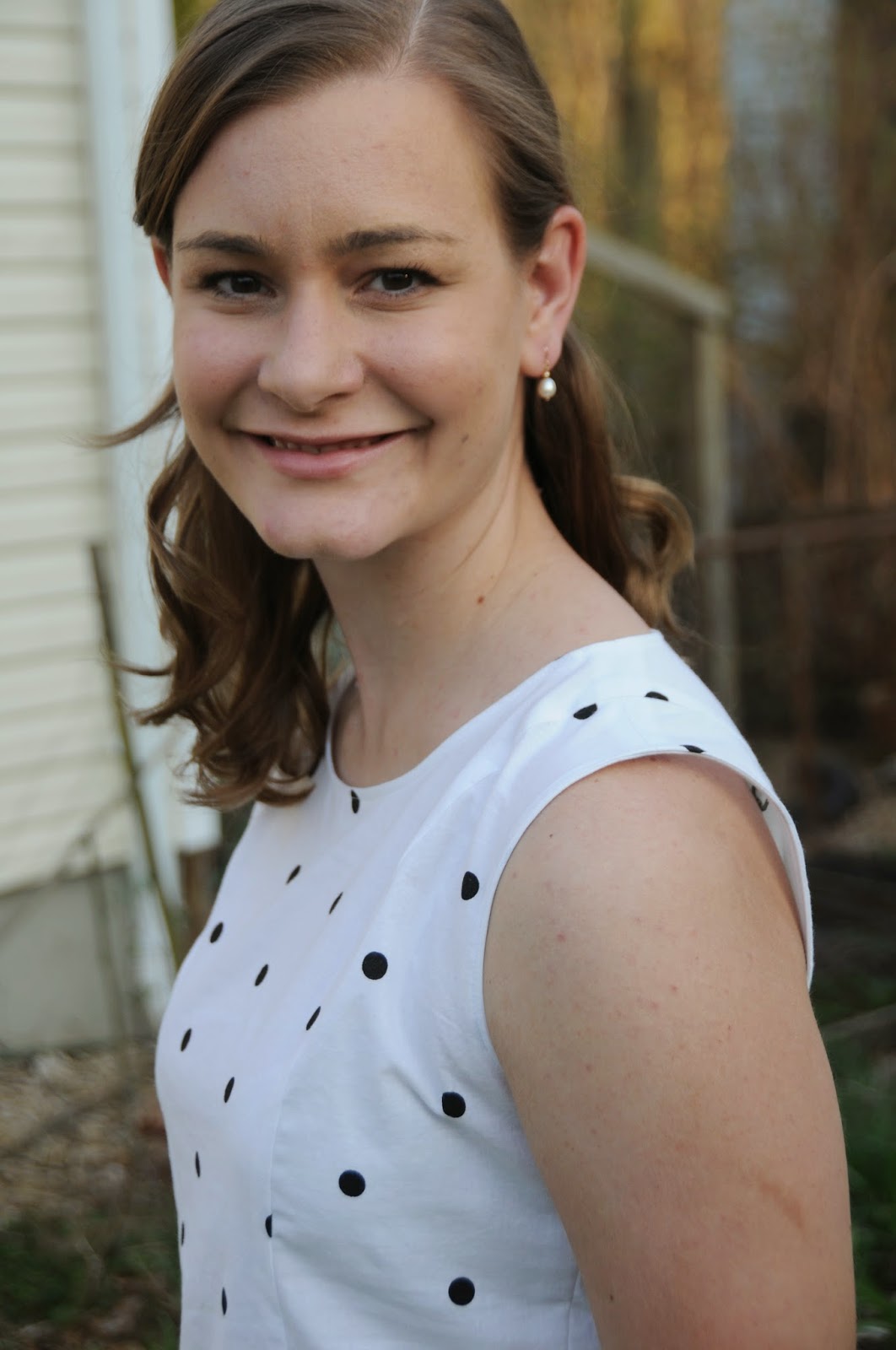 I definitely see many more Pendrell blouses in my future. It's a staple that looks great tucked into a skirt or untucked with pants and it's a new favorite for me!
Posted by Aleksandra Sandstrom at 10:30 PM No comments:

A few months back, I decided that I wanted to take up knitting. 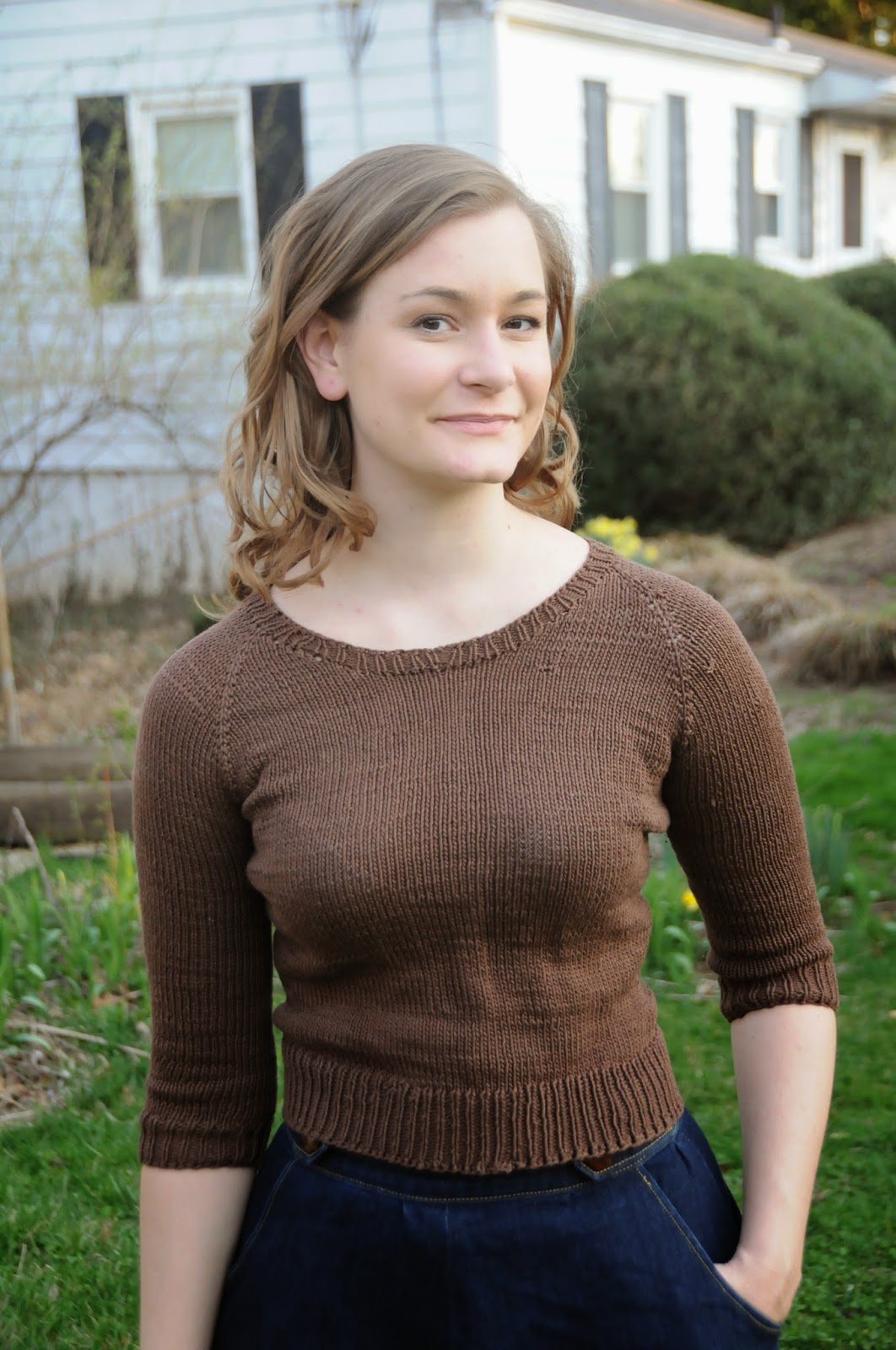 My mother taught me to knit a few years ago, and I made some scarves, which was fun. But really, what I wanted out of knitting was sweaters.

I love sweaters. I'm always cold and a sweater is usually my answer to that problem.

Unfortunately, I cannot wear wool at all, even in small percentages, so sweaters can be very difficult to find. I really prefer sweaters that are cotton or silk. 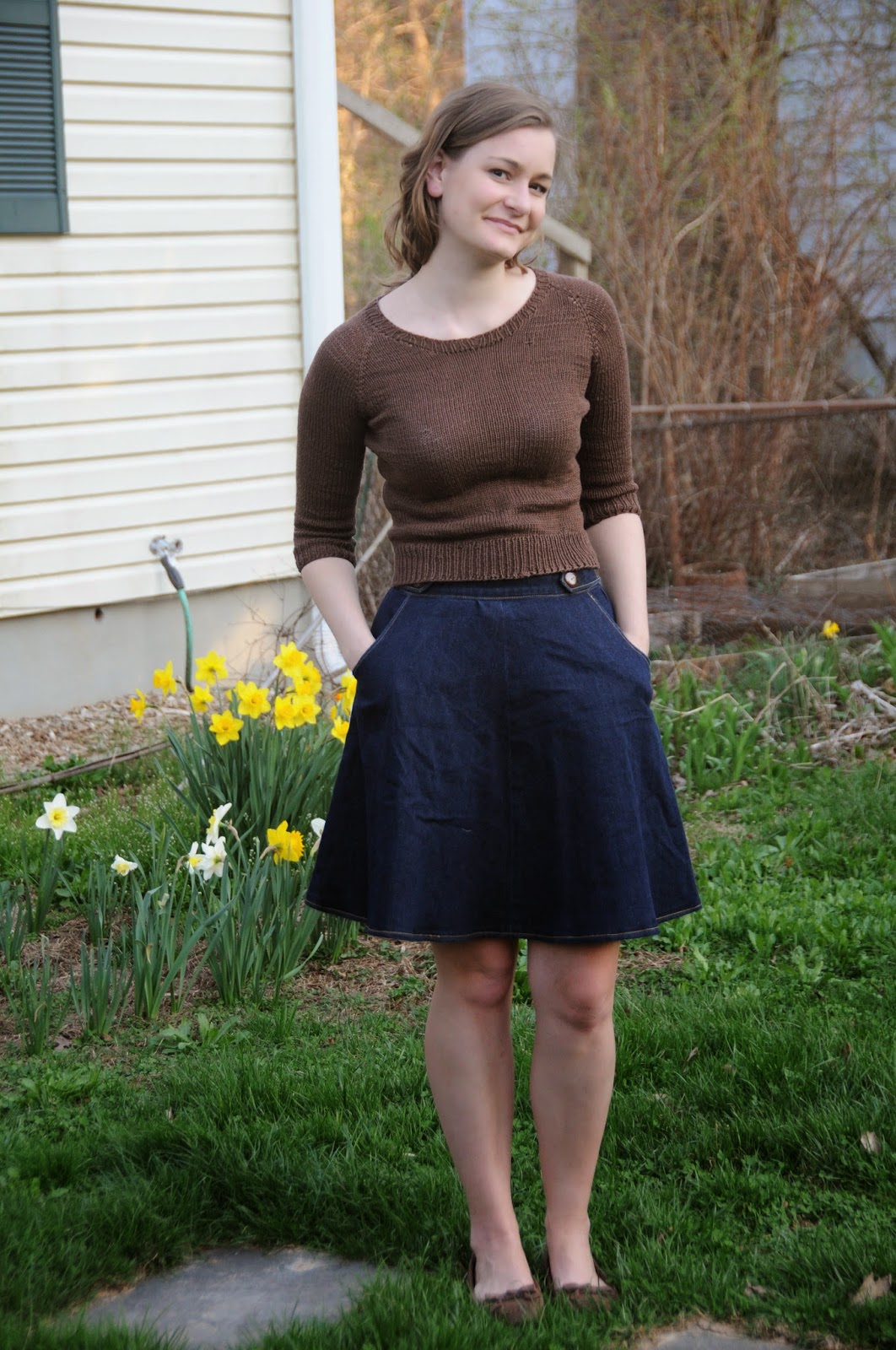 The yarn I used is a mercerized cotton yarn by Tahki Yarns. I bought it from my local yarn store, Uniquities. It's nice and soft and mercifully itch-free. 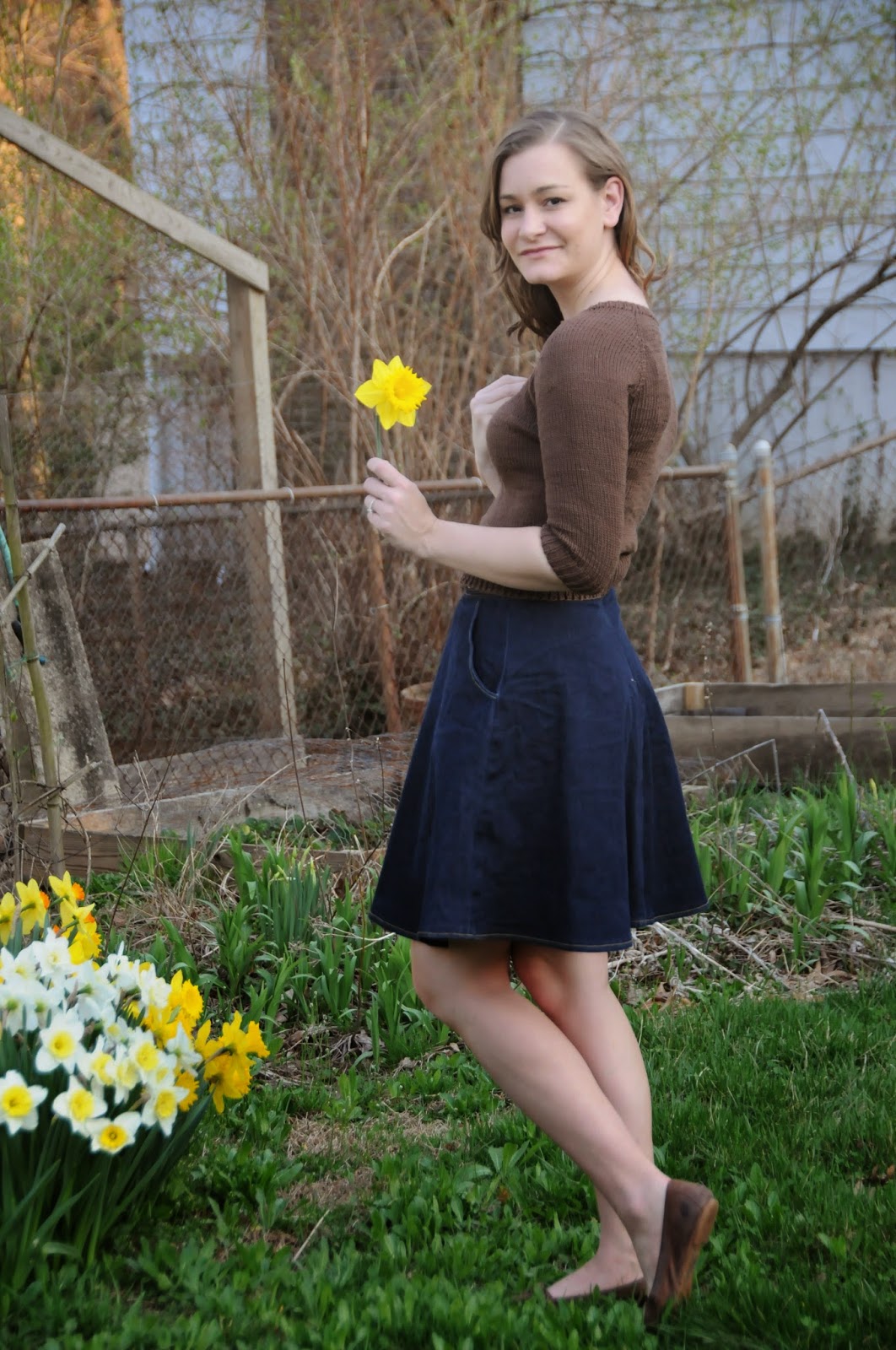 This is the second knitting pattern I've ever used (the first was a Miss Marple Scarf). I researched online a bit and discovered that a top-down raglan sweater is about as easy as it gets for sweaters. Sold!

This pattern is a free pattern called Brick. 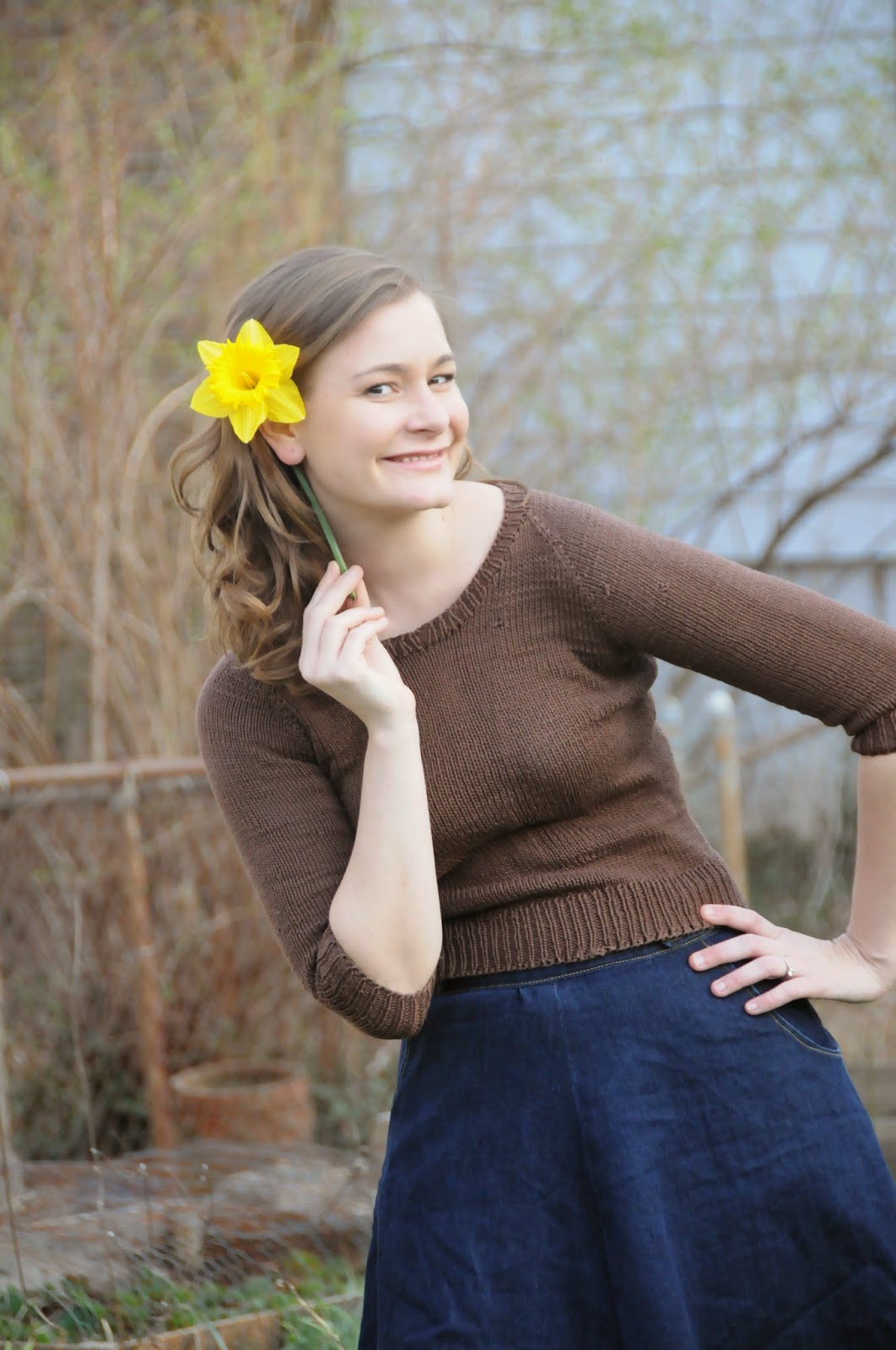 I appreciate that the pattern was free, though I will say, it has some issues. For instance, those sleeves? They're done to the pattern specifications -- exact number of rows and everything. They're supposed to be long sleeves. Bit short, eh?

Luckily, I prefer three-quarter sleeves (though usually I prefer them just above the elbow.)

The sweater itself I left short on purpose to wear with all my high-waisted skirts (like here with my denim Hollyburn skirt.) 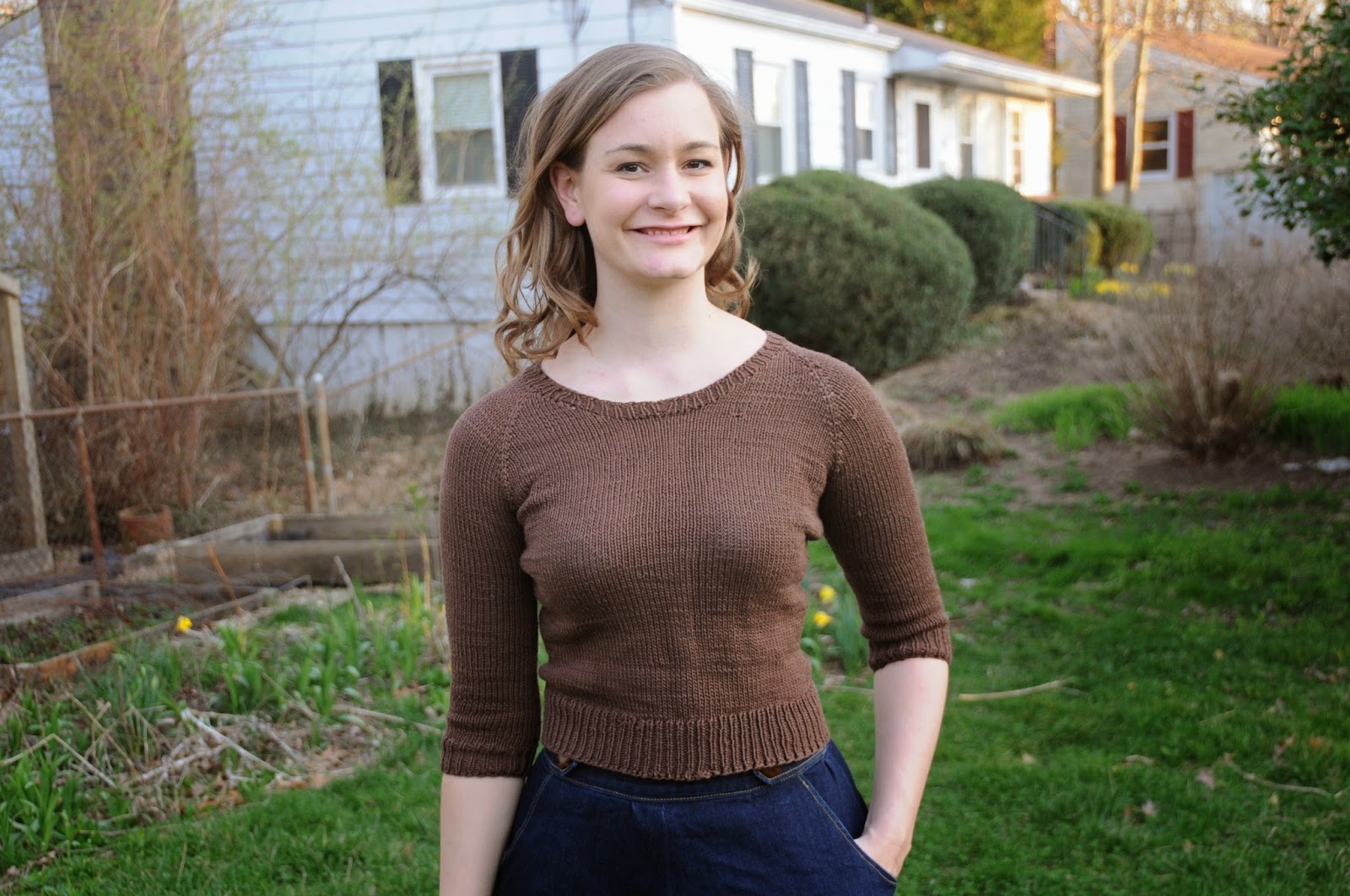 I used a TON of online tutorials and YouTube videos to make this sweater -- and it still took me two tries. The first try was error-riddled and when I got to the bottom, I bound off and realized I couldn't pull it over my head.

After unraveling the entire body of the sweater, I started over.

The second try went much better. And this time I used Jeny's Surprisingly Stretchy Bind-Off, which I'd seen online a few times. Worked like a charm! 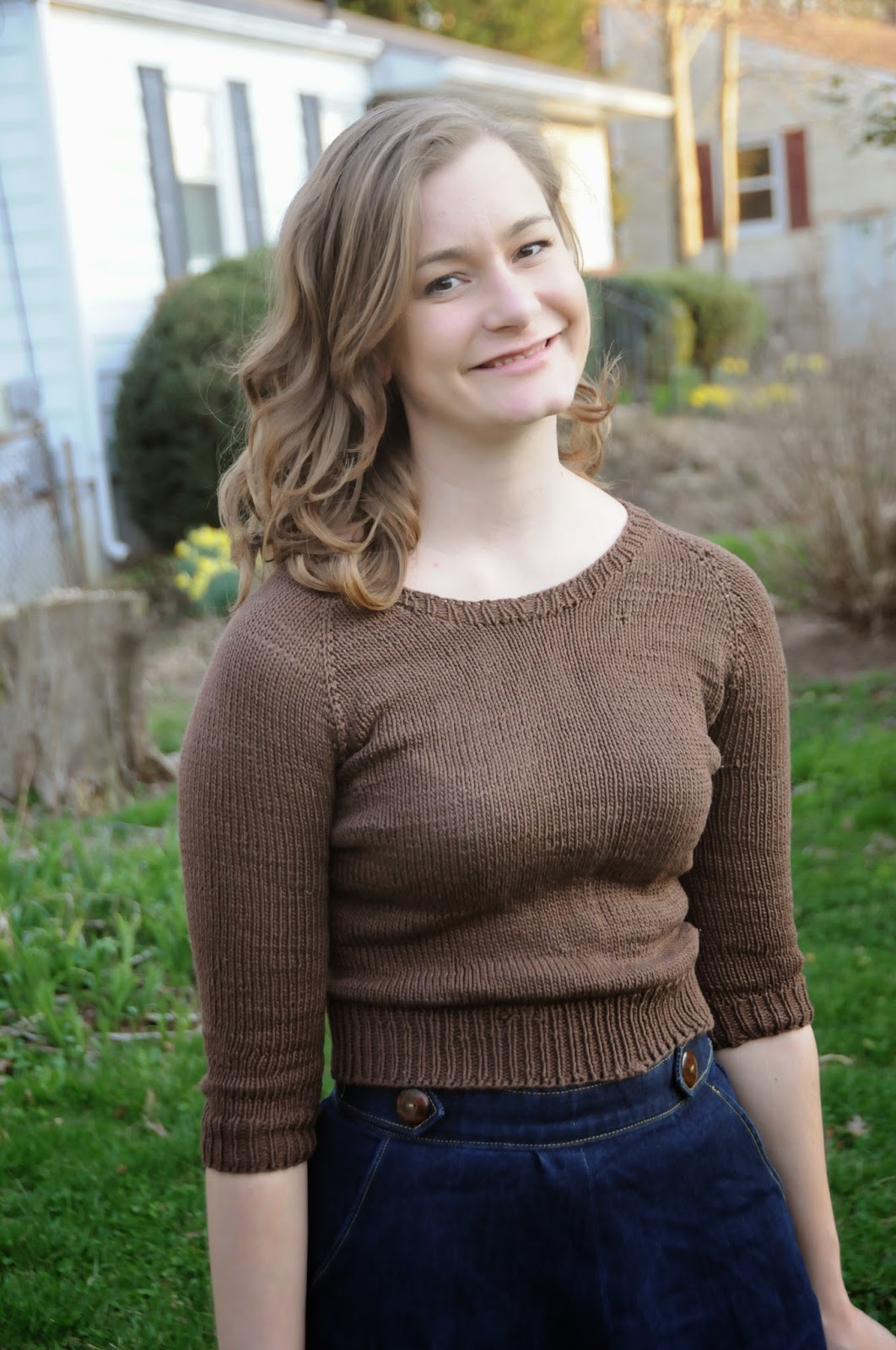 I mean -- don't get me wrong. The sweater still has a lot of mistakes.

But for a first try, I feel pretty good about it! 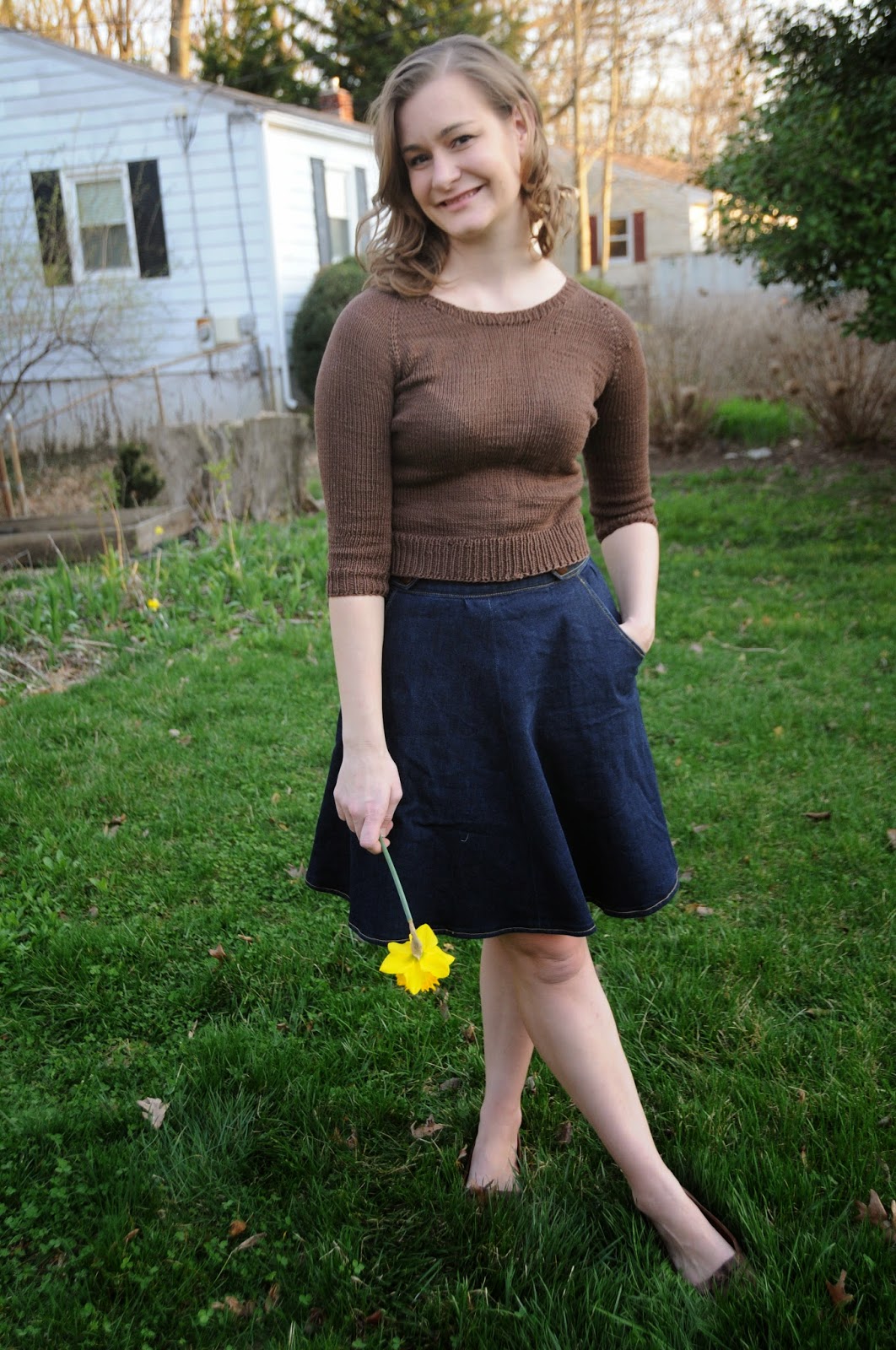 Here are my Ravelry notes (though this is probably more detailed.) Feel free to friend me. :)

Next up, I'm already about 75 rows in to the Miette Sweater by Andi Satturlund. I'm addicted!
Posted by Aleksandra Sandstrom at 9:34 PM No comments:

I was so excited when my girl Lisette announced that she and the fabulous Nettie and Clio were having a sew-along. They write three of my favorite blogs and I have had the privilege of meeting all three of them in person -- so you know I was in from the word go.

The ladies in charge announced that anything you consider to be sexy was in for this challenge.

Now, I don't particularly consider myself "sexy" so I knew this might be difficult. But I also had the perfect Betsey Johnson bow-print silky goodness in my stash, and, as a bonus, I was feeling like I needed some silky-fabric sewing practice.

And thus my idea was born. A silky, flippy, fun skirt. What could be more sexy?

I even had a good pattern idea. Colette Patterns recently released Zinnia, which, at first blush, kind of looks like a skirt that does not necessitate a pattern. But it does include an option for a lined chiffon skirt. Bingo! I needed all the help I could get for my first shifty-fabric project. 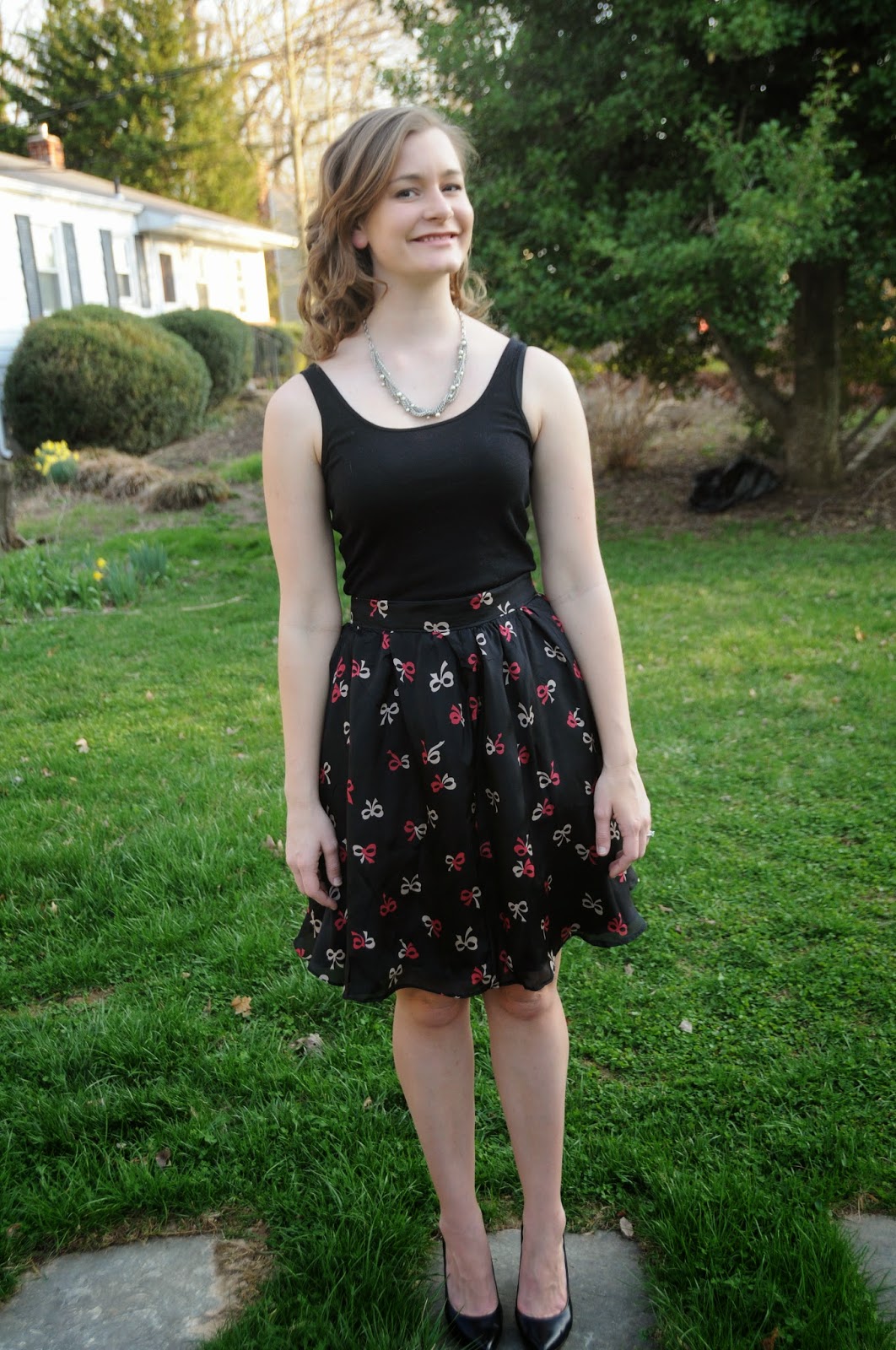 The bow-print fabric is from Fabrics for Less in New York and says Betsey Johnson on the selvage; I have no idea what it's actually made of. I burned a small bit and it stank and melted, so we can be fairly certain that it's synthetic.

It is very sheer and very very shifty. 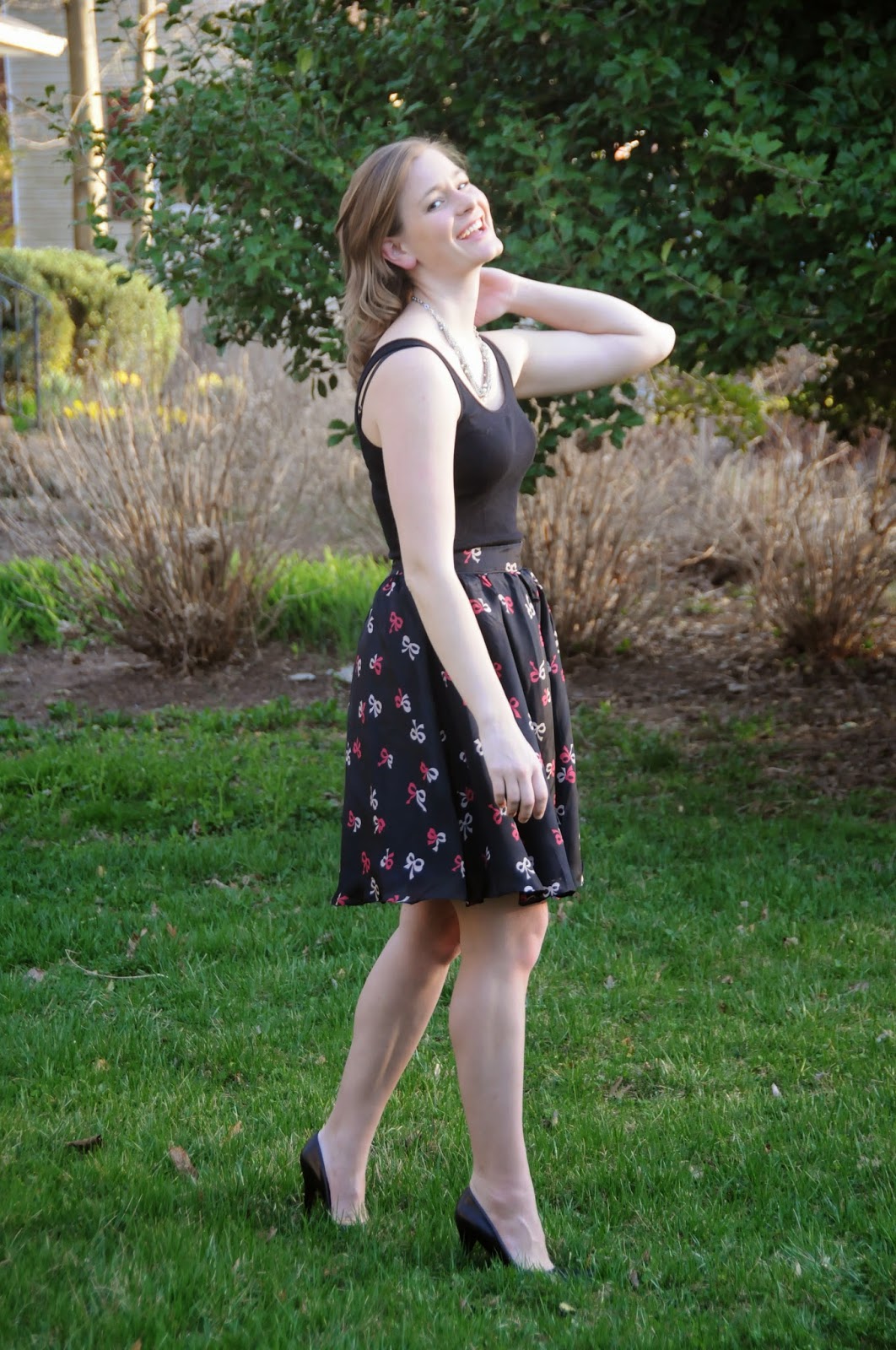 But thanks to the Internets, I knew how to combat those issues.

At least in theory. 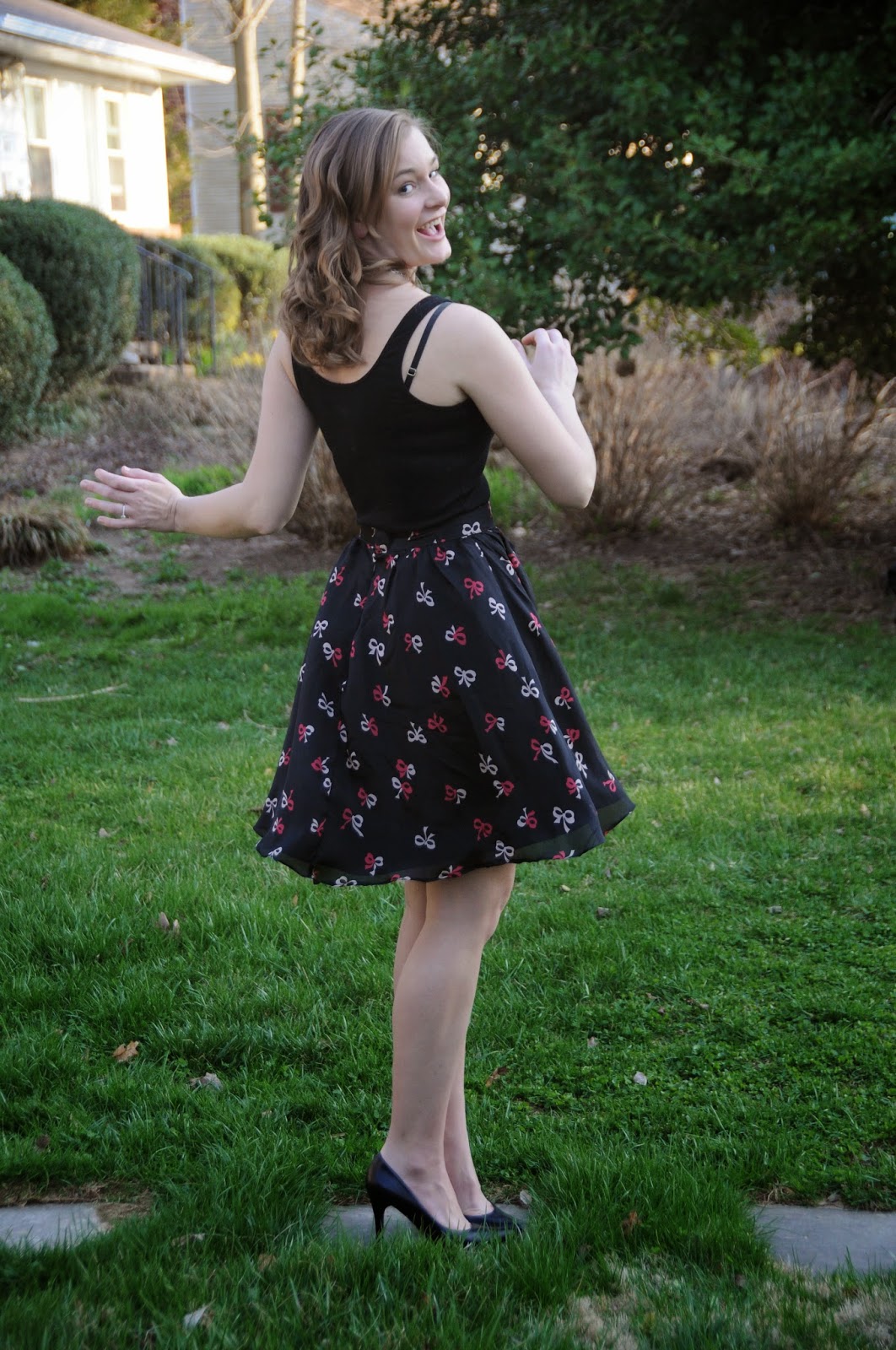 I used my rotary cutter (which, let's be honest, I use for everything I make) and tons of silk pins and I still ended up with a lot of trimming.

My blogland pal Lauren, who also bought some of this fabric (and made a freaking dress -- she is so brave) was kind enough to advise me about interfacing over email. I had read that one should not use fusible with sheer fabrics and I had no idea what to use/buy.

But Lauren assured me that she was 99.99 percent sure she'd used Pro Weft Lightweight fusible from Fashion Sewing Supply. Sold! I love high-quality interfacing -- why don't I ever buy it? Anyway, I immediately ordered a couple of yards of black (and some white -- and some clear elastic, because why not?) 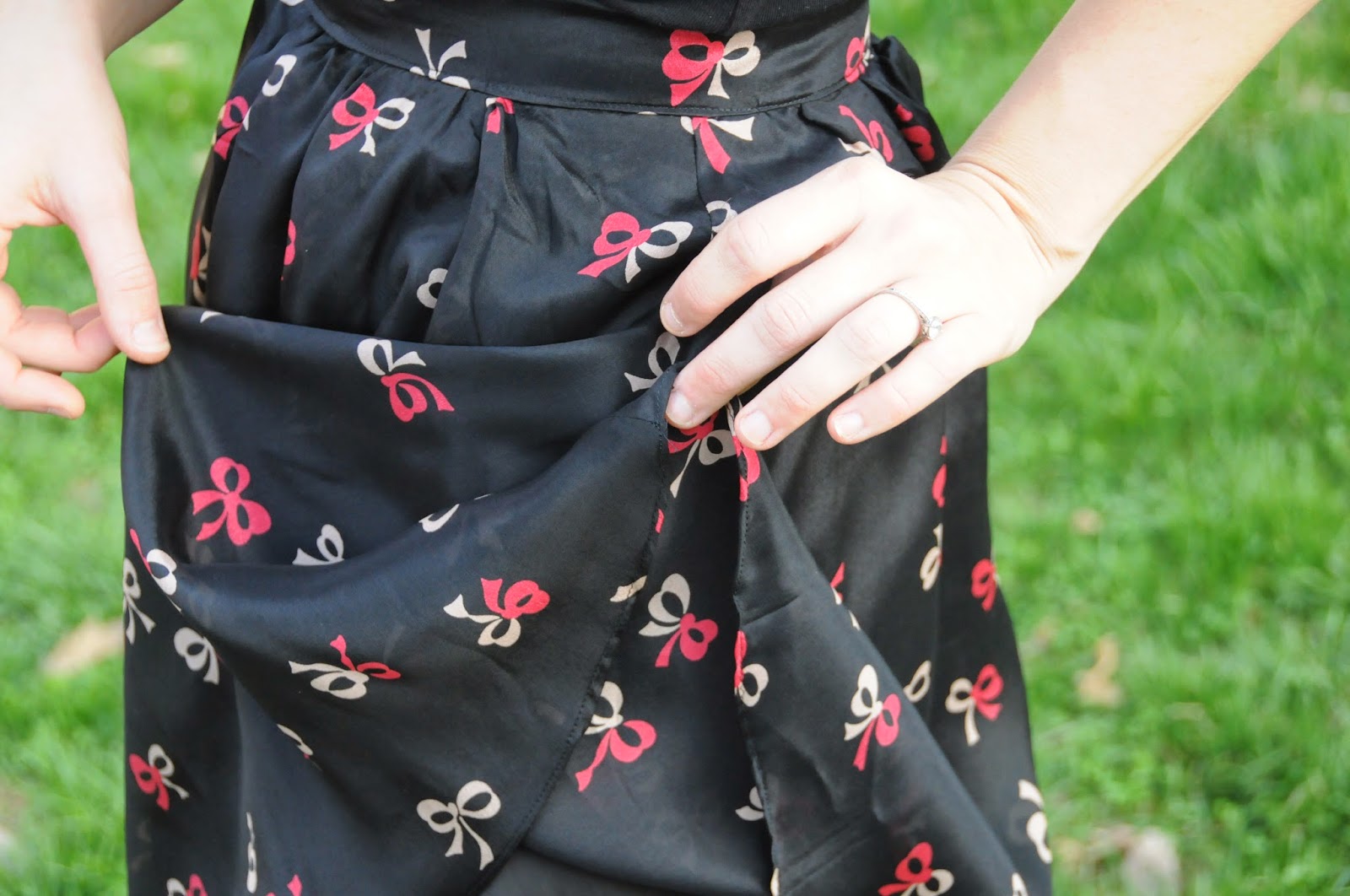 I lined the skirt in black bemburg rayon from G Street and I used some miscellaneous black silk machine thread from Elfreide's in Colorado and microtex needles from Amazon. I have a stash of short black zippers from my awesome friend Alicia's craft room clean-out and I used a big pants-style hook and eye closure for the waistband.

Every seam is a French seam, except the back seam, which I ran through the serger (and it basically sneezed out the bow-print -- much ironing ensued.)

I also finally learned to use my rolled hem foot with this project -- it's so fun to use! I was so impressed with the uniform double-fold hems. I will definitely be using this foot again. 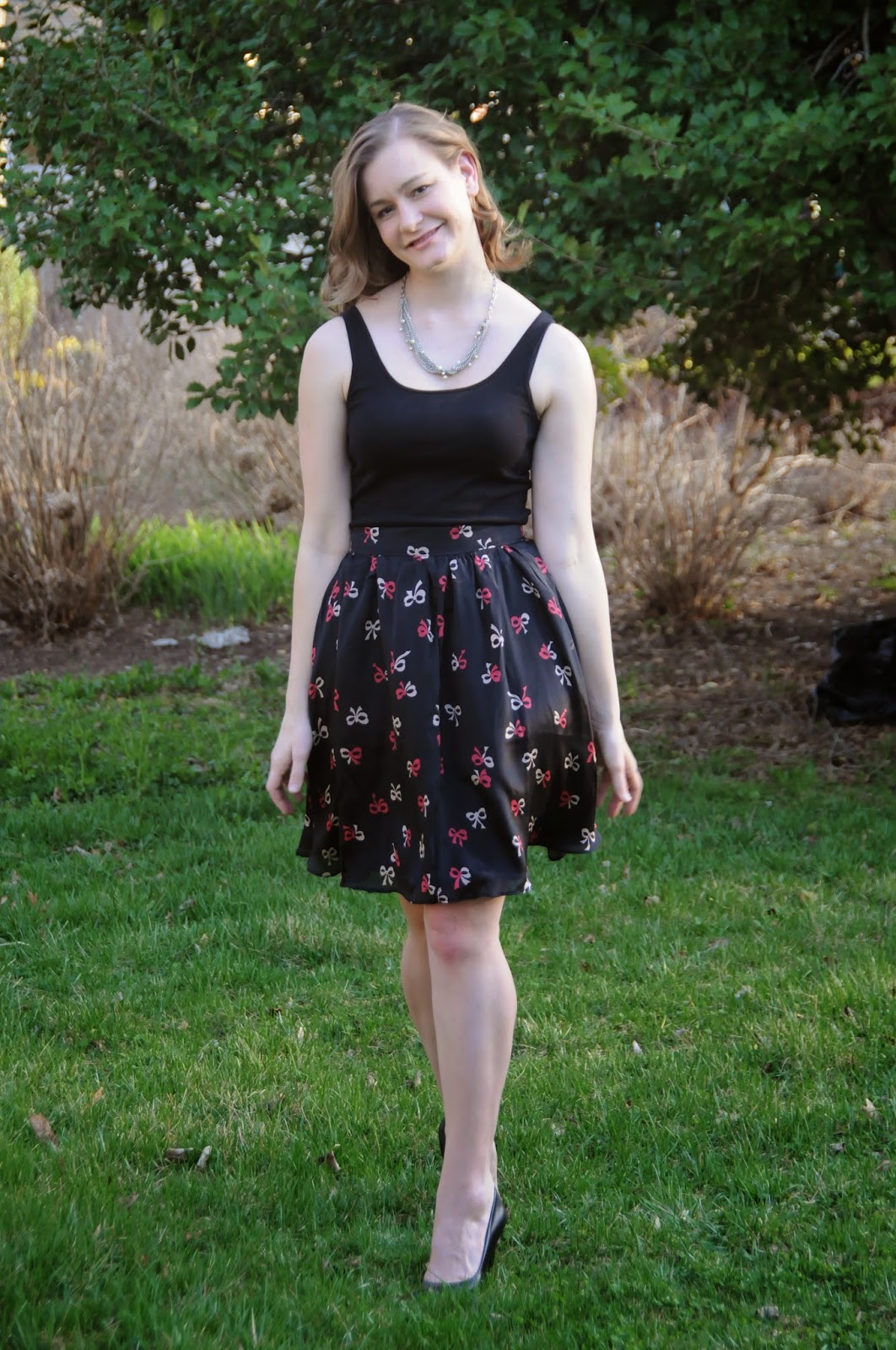 I made one major major change to the pattern to make my life easier -- I gathered the skirt instead of pleating. After working through the skirt pieces, I had no idea how I could possibly form nice-looking pleats.

The gathers look totally fine to me, though. I basted the skirt and the lining, serged them together and then gathered the waist seam.

Way easier than pleats. I'll save the pleating for cotton, thanks. 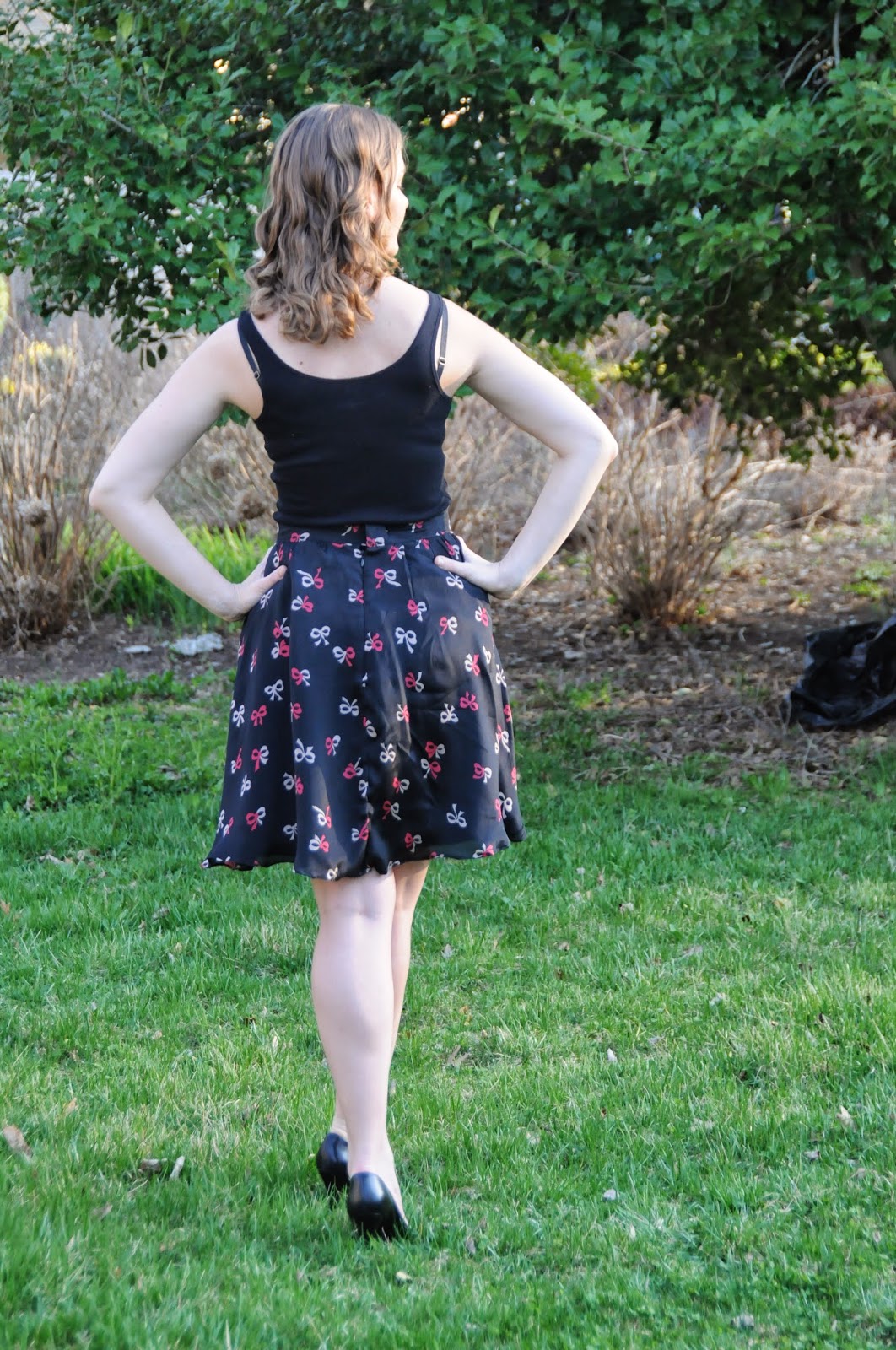 I definitely feel sexy and swishy and fancy when I wear this skirt, so I think the sew-along goal was reached.

I see this skirt as a nice date skirt -- although I should probably make up a cute black silk top so that I don't have to wear a random Old Navy tank top from three years ago, but hey -- I'll get there. 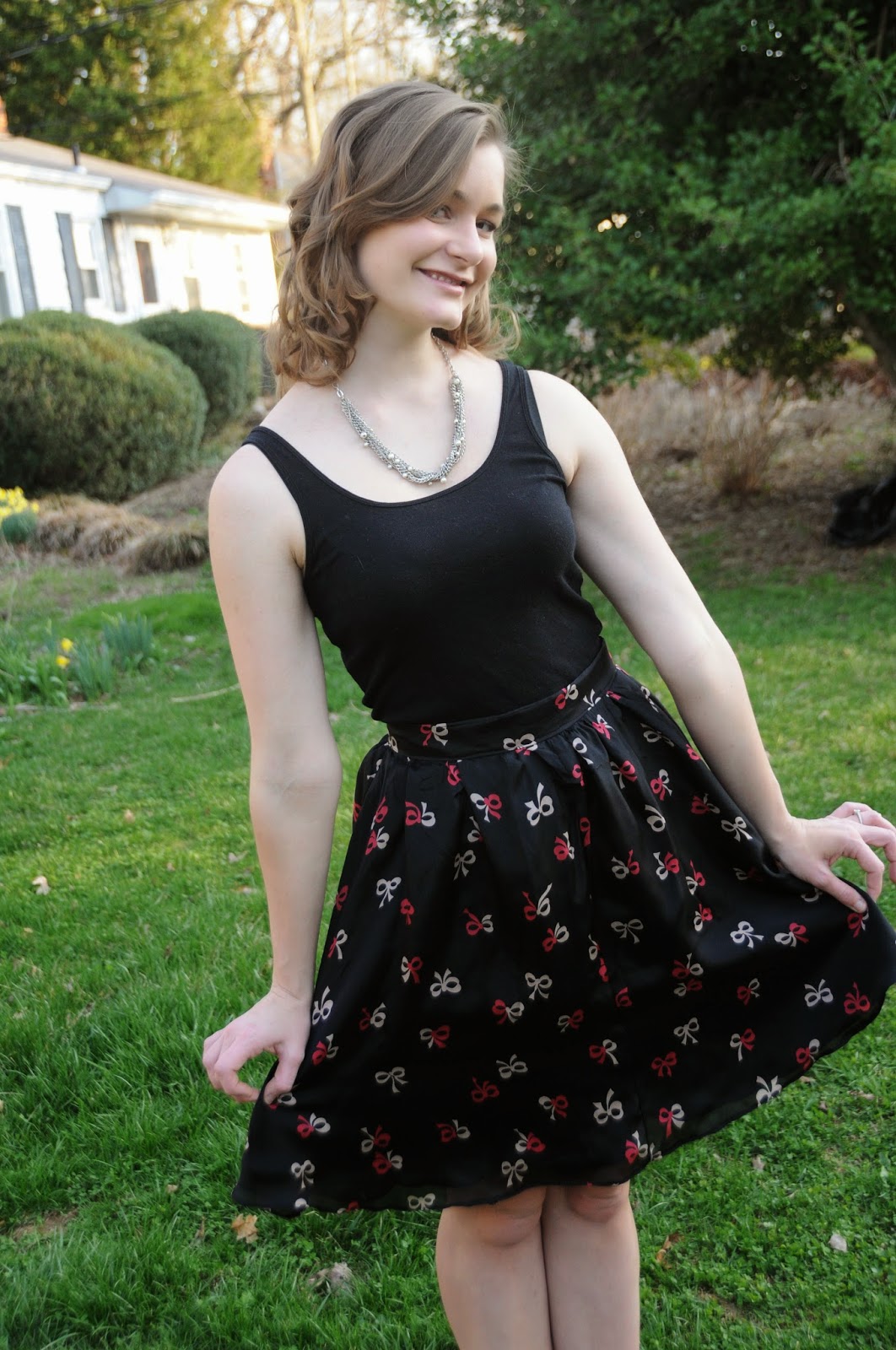 For now, I'm really happy with this project. And I can say I own a Betsey Johnson skirt, which is pretty awesome. So thanks, ladies, for the fantastic sew-along challenge! <3
Posted by Aleksandra Sandstrom at 1:26 AM No comments: