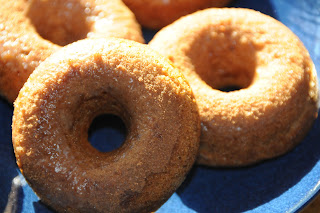 Recently I purchased a donut pan. Kind of an impulse buy, but I've been on a baking kick lately. (By the way, I swear that this will not become a baking blog. But I just have to share these donuts.)

And these doughnuts are that good.

I took the end of a batch to work on election night (I was working overnight) to leave for the morning crew. When I told Greg he got a panicked look in his eye and said, "But you'll make more, right?"

Clearly I don't bake frequently enough for the poor man.

Now. I will say that some people take issue with the fact that anyone would call something a doughnut when it has been baked. Well it's my blog and I'll call it a doughnut if I want to. If it makes you feel better, you can call them Appley and Delicious Non-Doughnut Rounds. But I'll just stick to apple cider doughnuts.

These taste like cake doughnuts to me, though it has been quite a while since I had a real doughnut, as I don't really like sweets very much. These are sweet -- but not too sweet -- and they have a nice amount of spice. 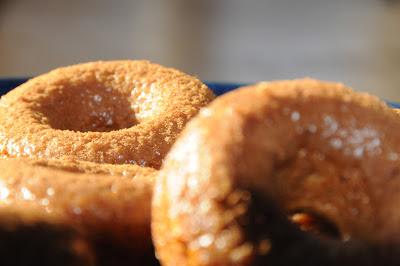 I've used two very similar recipes for this, one from The Kitchn and one from Tasty Kitchen.

I prefer the Tasty Kitchen version, but I modified the recipe to take elements from The Kitchn's recipe (apple butter) and my own craziness (whole wheat flour.)

In my rendition of the Tasty Kitchen version, I used apple butter instead of applesauce, a cup of King Arthur Flour's white whole wheat flour in place of all-purpose -- also tried using plain whole wheat flour, but that version got a bit heavy. And I messed with using hard cider instead of regular cider (pretty good actually -- totally worthwhile sub if that's what you have on hand). I also don't seem to own nutmeg. I have no idea how that's possible, but it is. And I added ground ginger because I love ground ginger. I also subbed some of the white sugar for brown. As with most any spiced cake-like food I make, I probably quadrupled the spices.

In the glaze, I thinned it out much more than the recipe called for -- it was VERY thick at first and not very apple-y. So I used extra apple cider and stirred in a bunch of apple butter to increase the apple flavor. And in the dipping cinnamon sugar, I added some extra spices and used less sugar.

Actually at this point I think it might be fair to just give you my recipe. I didn't realize how much I changed it the Tasty Kitchen version, sheesh. This is an approximate version, but I think it should be pretty close.


Use the Tasty Kitchen baking directions, though, this recipe is really all theirs. And the idea to put the batter into a plastic bag and cut off a corner and pipe into the doughnut pan? GENIUS. It is seriously difficult for me to spoon batter into a doughnut pan.

Anyway, the final product is what I would describe as a gingerbread apple cider doughnut. Delicious. And according to this website, they're not too terrible for you. About 150 calories per doughnuts. With a couple of scrambled eggs, I'd call that breakfast.

Or you can be like Greg and skip the eggs and have an extra doughnut.

And you better believe I'm making a batch for Thanksgiving. The people who are coming early/staying over need something delicious to get them through the Macy's Thanksgiving Day Parade, right? 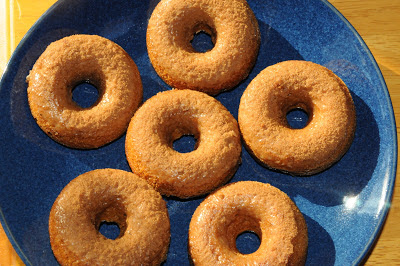 Posted by Aleksandra Sandstrom at 11:24 PM No comments: 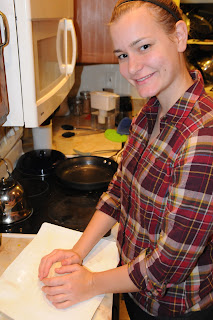 Recently I've been baking our sandwich bread. Greg frequently eats a peanut butter and jelly sandwich for lunch, and I like an egg sandwich for lunch most days (with my work schedule, I'm pretty much always home around lunchtime.)

And I've been messing around with the King Arthur Flour sandwich bread recipe.

Bread is deceptively easy to bake and it makes your house smell divine! I like to do a lot of cooking and baking on Sundays.

To be honest, the absolute worst part is kneading the dough before the first rise.

This bread requires 6-8 minutes of kneading, which doesn't sound like a lot, but it's not easy, either. Or maybe I'm just a wimp. Entirely possible.

I can't help but mess with a recipe when I try it, so the first time I made this bread (last week), I added a cup of whole wheat flour. The recipe said you could substitute up to half of the flour with white whole wheat flour, but I didn't have any, so I added plain whole wheat.

The bread was definitely edible -- even tasty. But not very good for sandwiches. Greg said it tasted like soda bread to him. In other words, a little more dense than it should have been. But it was nice with butter, so it suited my egg habit just fine.

This week, I learned my lesson and bought some white whole wheat flour, but I really think my yeast might be getting old, because it's definitely not quite as puffy as the picture on the King Arthur website.

All in all, though, this week's bread came out much closer to real sandwich bread... even if it's still a little short. I think I'll try to buy a new jar of yeast before it's time to bake bread next week.

The lucky thing about bread is that even if you mess it up, it's still pretty darn tasty. 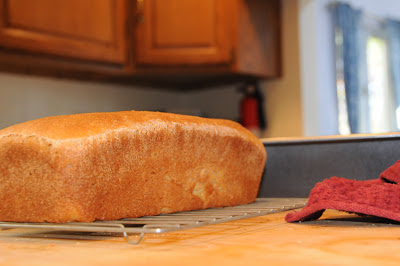 EDIT TO ADD: And right after I hit publish, look what popped up on my Google Reader!