Never am I more thankful to live on land than during a hurricane.

That's a funny thing to say, I'm sure, but my three years as a liveaboard gave me a healthy respect for indoor living during foul weather.

Hurricane Sandy has forced the entire area to grind to a halt. She's not quite here yet, but it's been raining and windy all day.

Greg and I went to see Miss Misty on Saturday. We took off her roller furled jib, lashed the main to the boom, tightened up all the hatches, doubled the lines and checked the fenders. You know... the usual. The marina was recommending that people take their boats out of the water, but I'm still a firm believer that a keelboat tied securely to a floating dock is much more secure than the same keelboat stored on land.

So far, Misty's made her way through several hurricanes without incident. Here's hoping this year is no different.

My thoughts are with all those living aboard and those suffering from the storm. And my prayers go out to the crew of the HMS Bounty and the U.S. Coast Guard, who works tirelessly to keep us all safe.
Posted by Aleksandra Sandstrom at 12:27 PM No comments: 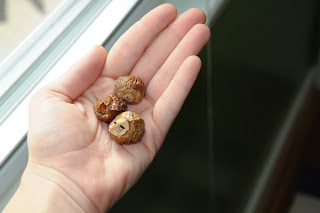 When it came time to do my most recent batch of laundry, I decided to try out the new soap nuts (which Greg lovingly refers to as my "crazy nuts.")

As you can kind of see there, the actual nuts are wrinkly and almost hollow-feeling.

The instructions that came with the nuts said that, contrary to popular belief, it is possibly to use soap nuts with cold water. You just have to "activate" them by soaking them in hot water.

So I put the recommended 5-6 nuts into the little drawstring muslin bag they came with, put them in a Ball jar and poured it full of hot water. I then let the nuts steep for about five minutes. They felt kind of gushy inside their bag when I poked them, which seemed like a good sign, so I poured the entire thing into the washing machine, on top of the clothes.

I did a mixed load with some of my clothes, some of Greg's clothes, some t-shirts, some jeans, a couple dish towels, some socks -- the usual. And I decided to go big. Instead of filling my Downy ball with fabric softener (we dry out clothes on a line outside), I filled it with white vinegar, a tip I'd picked up somewhere in my online eco-friendly, homemade detergent travels.

The clothing came out scent-free, which was new. No clean laundry smell. It smelled like fabric and nothing else.

I hung it on the line and after a few hours it was dry.

Now I will say that I obsessively sniffed everything to make sure that the soap nuts had, you know, actually cleaned things.

There's no nice way to say that Greg, whose laundry I do when I do my own, can get a bit... manly. And by manly, I mean sweaty. After washing, the shirt (and in the second load I did, the undershirt) that he had been wearing for yard work the day before smelled like his deodorant at the armpits. It didn't smell like sweat or anything, but it wasn't as perfect as Tide usually gets it.

I tried a load of whites and a load of colors. The same results for both -- the sweaty shirt smelled like deodorant. Everything else, though, smelled fine, including my running clothes.

The vinegar did NOT get things as soft as fabric softener, either. But it's all wearable, and the clothes do soften up after a few minutes of wearing. Or you can pop them in the dryer for 10 minutes to fluff.

I think, for now, we'll adopt an all-of-the-above laundry strategy: whites (mostly socks and undershirts and towels) and super dirty clothes in Tide and colors in soap nuts. Or I might continue to experiment and try washing in hot water and see if that works better -- I suspect it might.

I'm still on the lookout for a good fabric softener solution though. I don't think vinegar is going to cut it.

But I'd rather be partially eco-friendly than not-at-all eco-friendly, right? Right.
Posted by Aleksandra Sandstrom at 11:30 PM 2 comments: 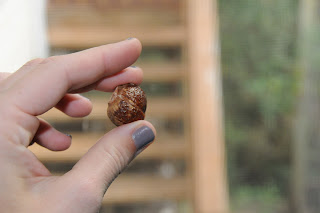 I just bought a small package of soap nuts from Amazon.

I’d like to say that I’m officially crossing out of normal and into out-of-the--ordinary, but let’s be honest: I’ve always been out-of-the-ordinary.

A few years ago, I found myself really enjoying the show “17 Kids and Counting” about the Duggar family. I know. Questionable taste. But alternative lifestyle choices have always fascinated me.

At any rate, I was at once fascinated by the fact that the Duggars made their own laundry detergent. Who had ever heard of such a thing? I remember asking my mother if I could make our laundry detergent and she, brilliant and incisive woman that she is, reminded me that sometimes my “cost-saving” projects ended up being overly expensive and time-consuming.

I abandoned the idea.
Then I moved in with my boyfriend and started using his washer and dryer. And then -- this is the kicker, folks -- I discovered Pinterest, which reignited my detergent-making ideas.

Several years older (and hopefully somewhat wiser), I began researching homemade laundry detergent. I came to the conclusion that I did not particularly like the ingredients listed in Borax. I didn’t know what all of them were and I didn’t like the idea that Borax includes an ingredient, boron, that isn’t renewable.

If I’m going to go to all the trouble of making something myself, then I want it to be something that I feel 100 percent good about. Otherwise, why waste my time?

Finding a link to an article on Make Online about homemade laundry detergent, one of the commenters mentioned that he used soap nuts. (And it looks as though the Grist article has been updated to reflect concerns about Borax.)

I was intrigued. Google informed me that soap nuts were a wonder nut, grown on trees, harvested by fairly paid workers and processed in the United States... what could be bad? Some reviewers said they don’t clean too well, don’t fight stains and don’t wash in cold water unless you grate them and turn them into liquid. (We wash everything in cold water and usually dry on a line outside.)

It turned out that Amazon was selling small bags of them (a trial size, if you will) for $7. Why, yes. I think I’ll give them a try. Free shipping with Amazon Prime, I might as well give them a go.

I'll let you know how they turn out.
Posted by Aleksandra Sandstrom at 7:18 PM No comments: 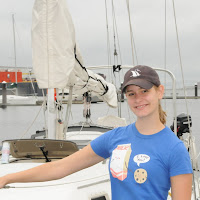 Welcome to my blog, The Liveaboard Takes the Suburbs.

I’m Aleksandra and I live with my boyfriend, Greg, in a lovely little house in the Northern Virginia suburbs. I work as a copy editor, but I also like to make my own, do it myself, grow it at home, re-do and mend.

Some of you may know me (hi, Mom!) from Diary of a Liveaboard. For three years, I lived aboard the boat my father and I co-own and I blogged about it sporadically.

Living aboard was an amazing experience -- one I am very glad to have had -- but I find myself in love with living in a house. I have space for a garden, a sewing area, a home office that doesn’t double as my kitchen table/food prep space and, the best part, a full-sized kitchen.

It might sound trite, but every day I feel lucky to have this space. And I’m incredibly thankful for Greg, who is supportive of all my crazy ideas, whether they work out or not: home-sewn paper towel replacements, soap nuts, baked donuts, a squash tree... the list goes on.

I intend this as a space to talk about my successes and my failures. My crazy ideas and DIY attempts. As always, feel free to email me or comment with any questions you might have.

Thanks for stopping by -- I hope you’ll come back soon.

Posted by Aleksandra Sandstrom at 5:38 PM No comments: