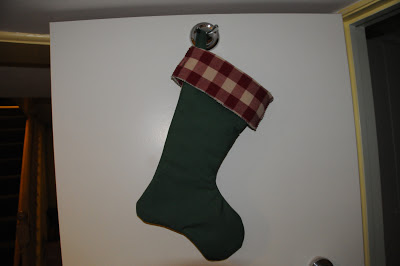 This year, Greg and I decided to do Christmas stockings for each other. Of course, instead of buying stockings, I decided to make some. Joann's, as always, was having a sale. So I bought a yard each of red plaid and green fabric and a yard of fusible fleece to make the stockings a little puffier.

Fusible fleece, just in case you're wondering, is about $8 a yard. But I had a 50 percent off coupon, because I'm awesome (I highly recommend the Joann's app if you're a big JoAnn's fan.) The ladies at my JoAnn's crack me up. At the cutting counter, I presented the fusible fleece and requested a yard and the lady looked at the fleece and leaned over the counter to whisper, "This is not on sale. You have coupon?" I told her that I did, and she smiled big and cut the fabric for me. She was genuinely worried that I might overspend on fusible fleece. Cute, right?

Anyway, here are a few pictures from the second stocking. The first one I made after work one night, meaning that I didn't finish until about 2:45 a.m. since I work until 1 a.m. Which is to say that there aren't pictures from the first stocking.

First, I made a "pattern" out of muslin. I had to make the stocking HUGE to account for all the seams and quilt. I just used a charcoal pencil to sketch a rough outline -- and then I realized how much would be taken up by seam allowance and made it about half again as large.

I cut just about everything with a rotary cutter because I'm lazy and I think the finished cut looks more neat. And I'm lazy. 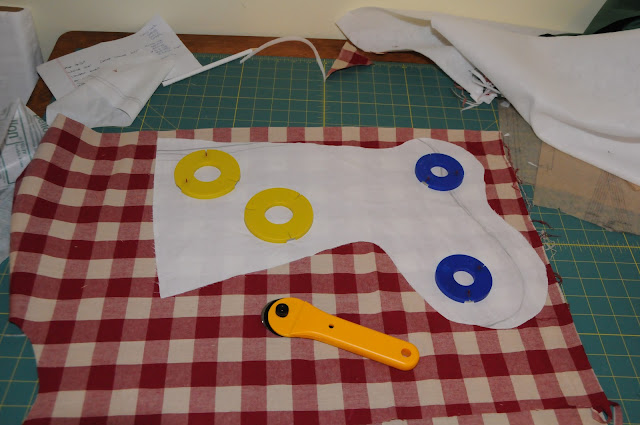 Do you like my pattern weights? They're my mom's. She gave me a bunch of her old stuff. She has fancy new pattern weights. But these have character -- I remember her using them when I was a kid. 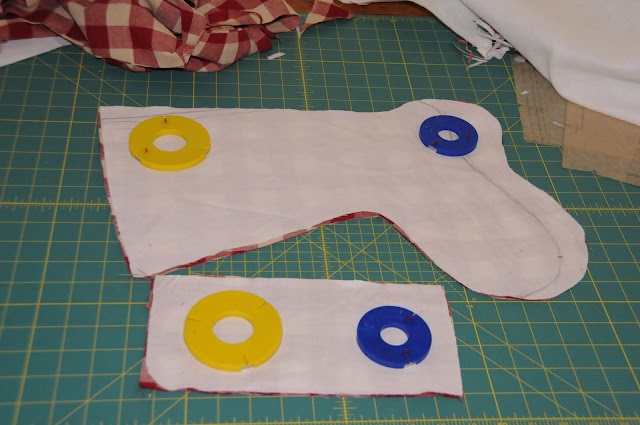 So first I cut out two stockings and two cuffs from the red plaid. 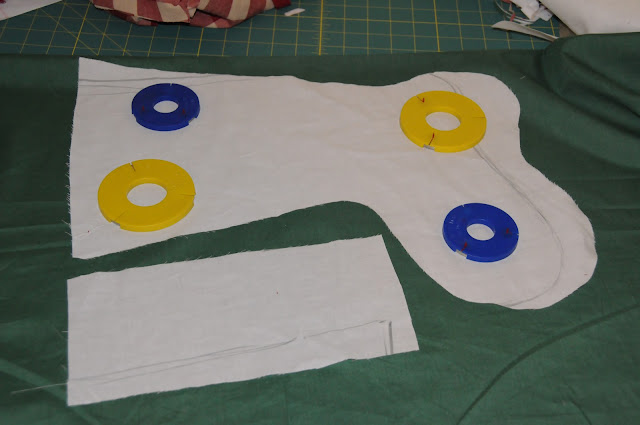 Then I cut two stockings and two cuffs from green. 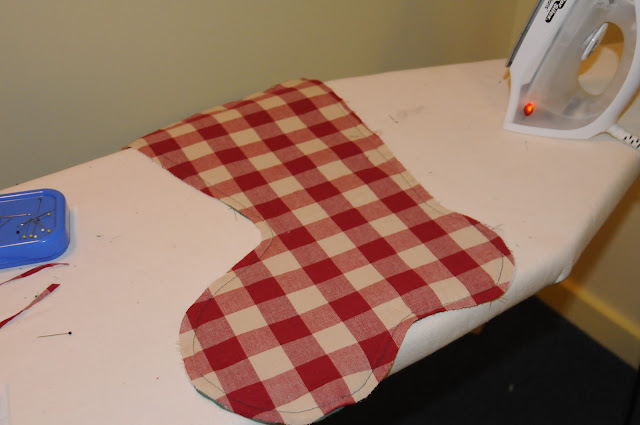 Then I ironed one stocking and one cuff to the fusible fleece (again with the laziness -- I could have used normal quilt batting.) I wanted the stockings to be different on each side, so I sandwiched the opposite fabric onto the other side of the fusible fleece and sewed a seam around the outside. 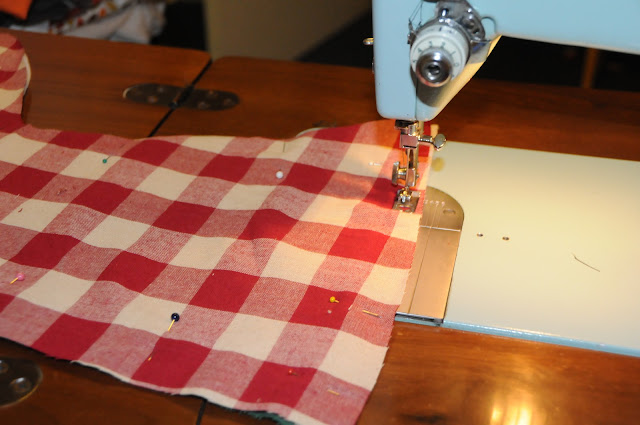 I did this for both sides of the stocking and then sandwiched the two sides together and sewed around the outside. Except the top, obviously -- you want your stocking to open. (Fun fact: The first stocking, I sewed the top shut by mistake. I got in a groove of sewing all the way around. Don't be like me.) 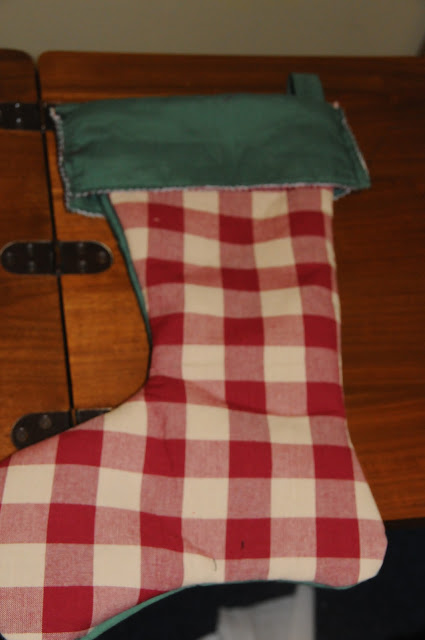 Then I trimmed the seam allowance with pinking shears, sewed the cuffs (also sandwiched with fusible fleece) to the top and flipped the whole thing right side out. 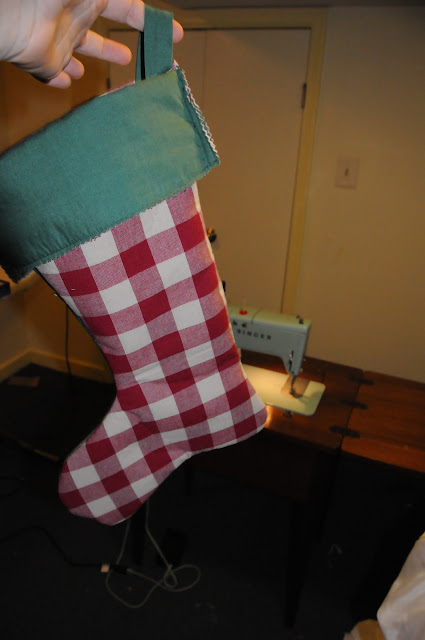 Finally, I sewed a little loop on the back of the cuff so that we'd be able to hang the stockings over the fire. 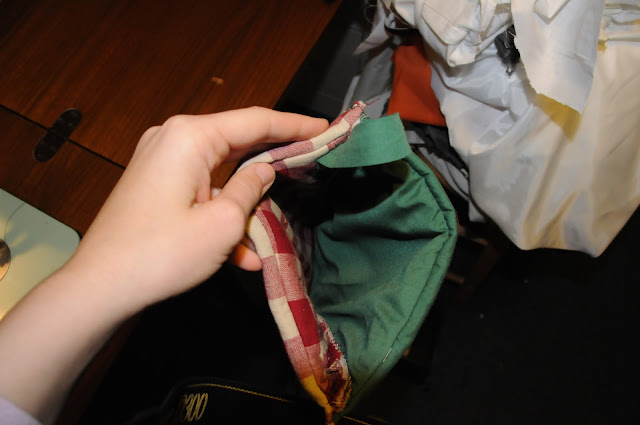 Here's an inside shot. Please excuse my scrap fabric pile in the background.

These made pretty small stockings, as you can see with my hand there. (Although, for the record, my hands are huge -- larger than most men's hands.) But they're just big enough for a good bunch of small stocking stuffers, which is exactly what I wanted. I haven't decided yet if I want to embroider the solid green cuffs with our names. So far I'm thinking no. Maybe next year. :)

Hope you all have a merry Christmas!

Posted by Aleksandra Sandstrom at 11:26 PM No comments: 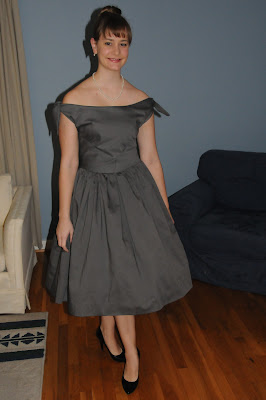 This pattern is from a collection of vintage patterns that they re-released last year.

It was a fairly simple dress to sew and the pattern instructions were nice and clear, which I always appreciate.

I don't have a zipper foot for my sewing machine, so I had to hand sew the zipper. And the dress was HUGE the first time, so I had to pull it apart and take it in a couple times (resewing the zipper three times, thank you very much). And I didn't like the way the straps were supposed to tie, so I tied them at the shoulders. But that looks a little more fancy anyway, I think.

Overall, I think it was a success! I got tons of compliments, which are always good for my ego. One gentleman even stopped me to say that I looked like I stepped right out of 1953 (I chose to take this as a compliment) and that he adored my dress. So sweet!

I'm wearing it with a crinoline from ReSashay, which is the most wonderful online shop. I ordered the crinoline on Monday, and it was delivered on Wednesday.

And you can barely see them, but I'm also wearing my mom's wedding pearls. I found them in a dresser at my grandmother's house when we were packing her things so she could move to a condo. My mom had forgotten all about them!

This was a fun project, but next up are a dress (one that is slightly more work-appropriate) and a little shell shirt. I'll let you know how they turn out!
Posted by Aleksandra Sandstrom at 7:41 PM 6 comments:

My mother is a fantastic seamstress. She made all of my clothing (except jeans and underwear, she is usually quick to point out) and Halloween costumes (everything from a fuzzy bunny to a unicorn) when I was a kid. She also stayed home with me until I was 3 and supplemented the household income by making costumes for the Peabody Dance School. She made me a flower girl dress for my Aunt MeeMoo’s wedding.

Basically, my mom is a sewing badass, though she doesn’t break out the machine as much anymore.

Recently I came into possession of the sewing machine that my mother used when she was learning to sew. My grandmother’s sewing machine. From the early ’60s. On the phone the other day, my Mommom informed me that she bought it in 1963.

It’s green and loud and heavy.

Really, there’s no reason I can’t do all of my sewing on this machine. My Mommom and Mom both did. (Mom’s got a super fancy newfangled plastic machine these days.)

I’d also really rather not drop $500 on a brand new machine that’s willing to do quilting. Because I would really like to make a new quilt and cheap machines don’t have the wherewithal to manage heavy quilting.

Also, I just don’t trust a machine that weighs less than 20 pounds. There’s something just not right about that, let's be honest.

So I've carved out a little corner of the basement for a sewing area. There was a serendipitous coupon (Groupon? LivingSocial? The world may never know) for G Street Fabric, a fabulous store near here. It was $25 for $50 worth of merchandise. So naturally I bought the largest cutting mat I could find. And it fits perfectly on the table that used to hold Greg's miscellaneous papers. Yay for using a filing cabinet!

On the ironing board, you see my latest project, which I plan to wear this weekend to a fancy party -- and there will be finished-product pictures, don't you worry!

I know it's a bit of a mess right now.

But I've got major plans for this space, which looks a bit bare now. I've got a bookcase to put in there to hold all my fabrics and notions and things. And I plan to put up a magnetic knife strip for my scissors and a bulletin board I have leftover from another DIY project. Not to mention some pictures and my little TV -- gotta have something to listen to while I work!

I have so many ideas for making my little sewing room into something both functional and cute (rather than the current mess.)

For now, though, it meets my needs and I'm having all kinds of fun with my little sewing projects -- even if I'm not quite up to fuzzy-bunny-level sewing just yet. ;)
Posted by Aleksandra Sandstrom at 12:55 AM 1 comment: