This past weekend was one of my favorite events of the year: the United States Sailboat Show in Annapolis, Md. The Boat Show, as everyone I know calls it, is the oldest and largest in-water boat show. Basically, they haul in tons of extra floating docks, tie it up to City Dock in Annapolis and dock hundreds of boats. In addition to the boats, they also have large tents filled with boating goodies.

It's basically sailing paradise. Where else are you going to see million-dollar boats, composting toilets, inflatable life rafts and jewelry made from navigational charts for sale all at once? Plus, I always see a good number of people I know. The local sailing community is not large.

Two years ago, I took Greg to the show; he was really excited to go back, so I called my dad and got him to meet us. 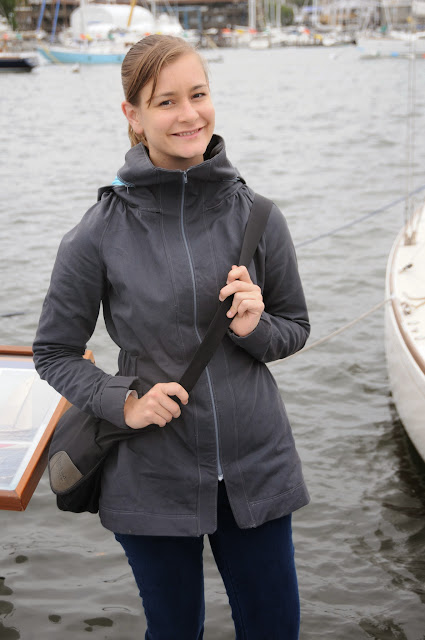 I wore my new Sewaholic Minoru jacket to the show -- we were just getting over a week of rain, so it was cloudy and slightly chilly -- and took some pictures on the outer docks.

I made the jacket from $8-a-yard grey twill from the Garment District in NYC along with some $4-a-yard polyester lining and notions from Sil Thread. All in all, this was a very economical make, considering I got a coat out of it. I think I probably spent less than $40 altogether. 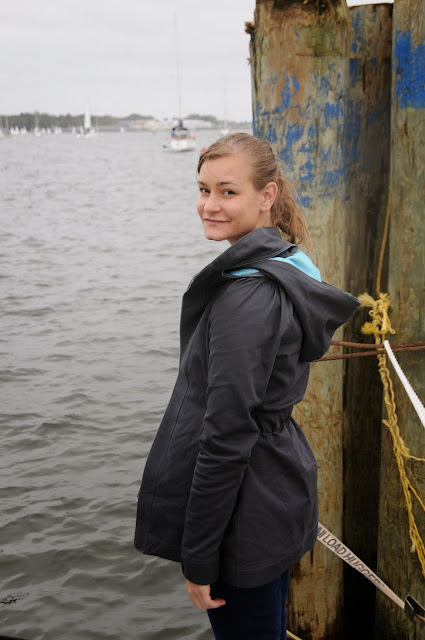 I cut a straight size 8 and didn't bother to make a muslin -- this is my sixth Sewaholic make and I haven't yet needed to make fit adjustments to a pattern, so I just went with it. The only change I made was to line the hood. 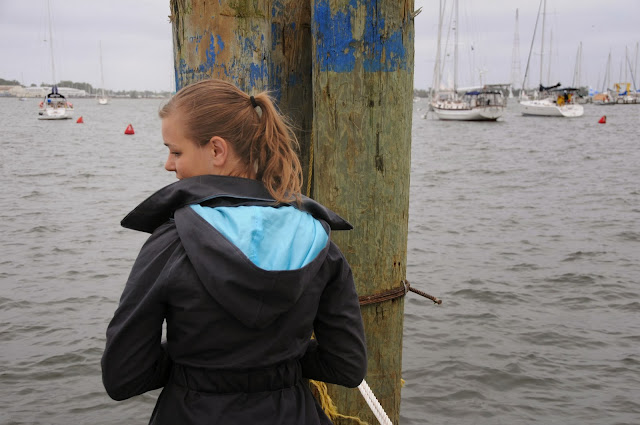 If I make it again, I'll probably leave out the inside breast pockets. I don't think I'll ever use them. I'd probably also add some outside pockets. I didn't think it would bother me not to have pockets for my hands, but I found myself reaching for them all day. 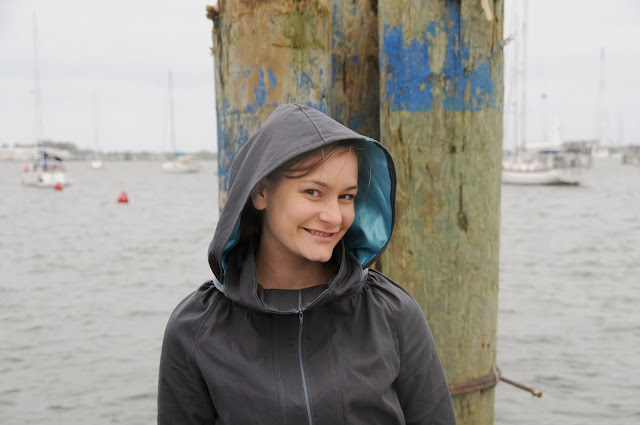 My dad's one comment -- after entreating me to make one for him -- was that the collar looked overly floppy. In fact, I believe his words were, "it looks like a wind funnel!" I could definitely see putting some interfacing in there to make it stand more stiffly next time, but it doesn't bother me too much. 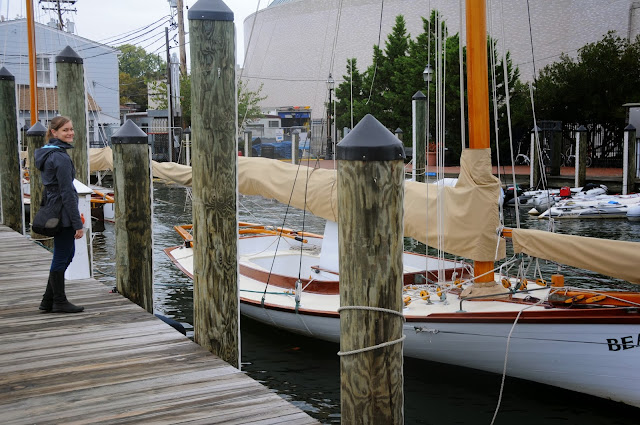 I also could have done a better job with my topstitching. I'm still working on producing consistently pretty topstitching. I also had trouble lining up the jacket and the lining, so there's a not-so-pretty bit on the inside neck seam that I was thinking I might cover up with ribbon. Or I might not. 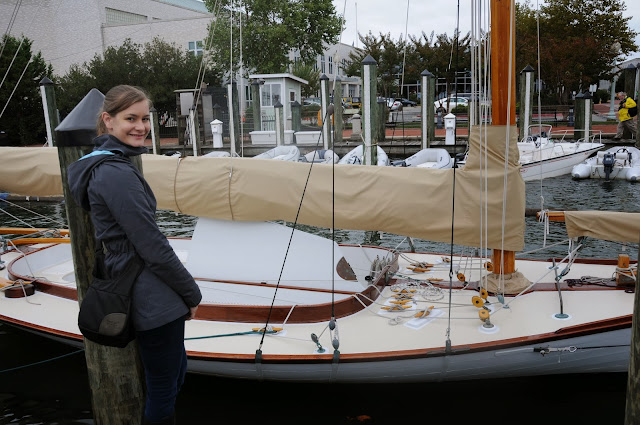 But in general, I really love this jacket and I could definitely see myself making it again. It's really comfortable and very warm. And I think it's really flattering, too!

On our way out of the boat show, we discovered a large booth filled with sewing machines. 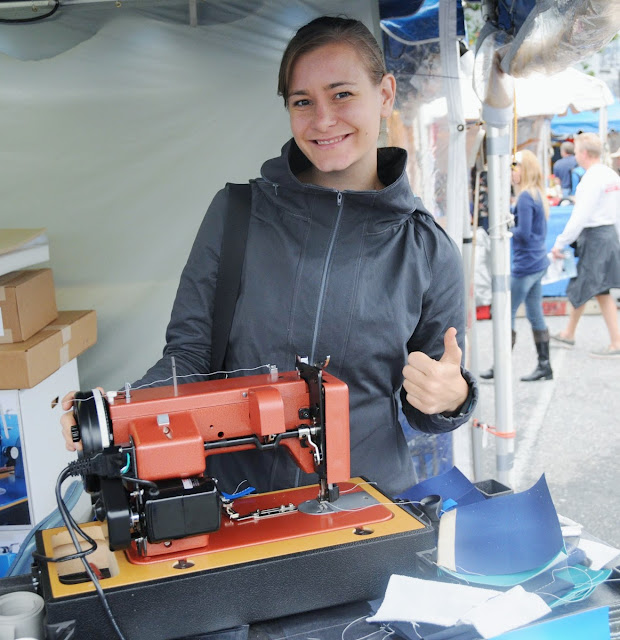 These machines were awesome! They're meant for heavy-duty work, like sailcloth and sunbrella-type fabric. I was oohing and aahing when the salesman came over and gave us a demo. (Meanwhile my dad tried to show me off to the salesman and told him all about my coat -- only slightly embarrassing!) 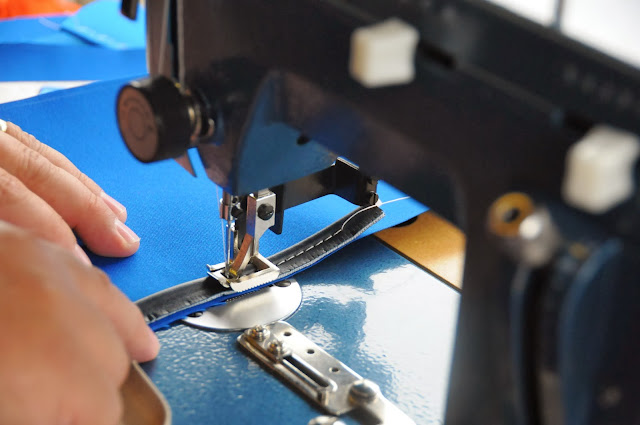 Anyway, these do a straight stitch and a zigzag and I was watching him punch through some pretty impressive layers. Above he's attaching leather piping to sunbrella fabric. 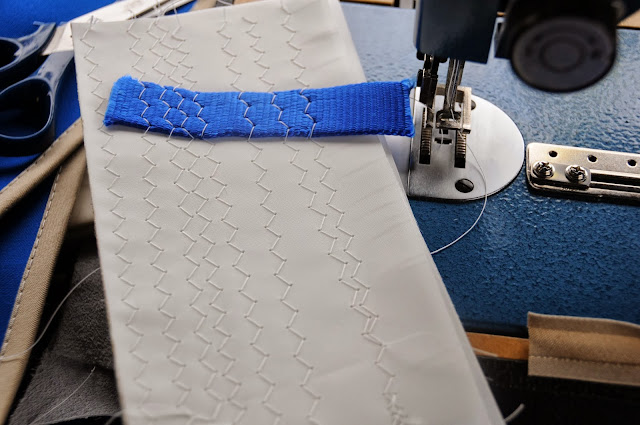 And this is something like 16 layers of sailcloth with a piece of sail tie (the blue thing.) The amazing thing about this machine was its built-in walking foot. That thing fed like a champ. And only $800 or so. There was a crowd of folks coming through the booth who had all sorts of questions and comments for the salesmen, so I imagine these machines are widely used among the DIY boating community -- and I can see why. It's probably cheaper to buy an $800 machine and make new cushions or what-have-you than it is to pay someone else to do it.

Anyway, the boat show is always a great time and I'm really glad to have had an excuse to wear my new jacket!
Posted by Aleksandra Sandstrom at 10:33 PM