This year, I've really gotten excited about making costumes, and, since it's Halloween week, I thought I'd post a miniseries of three posts on my recent costume makes. 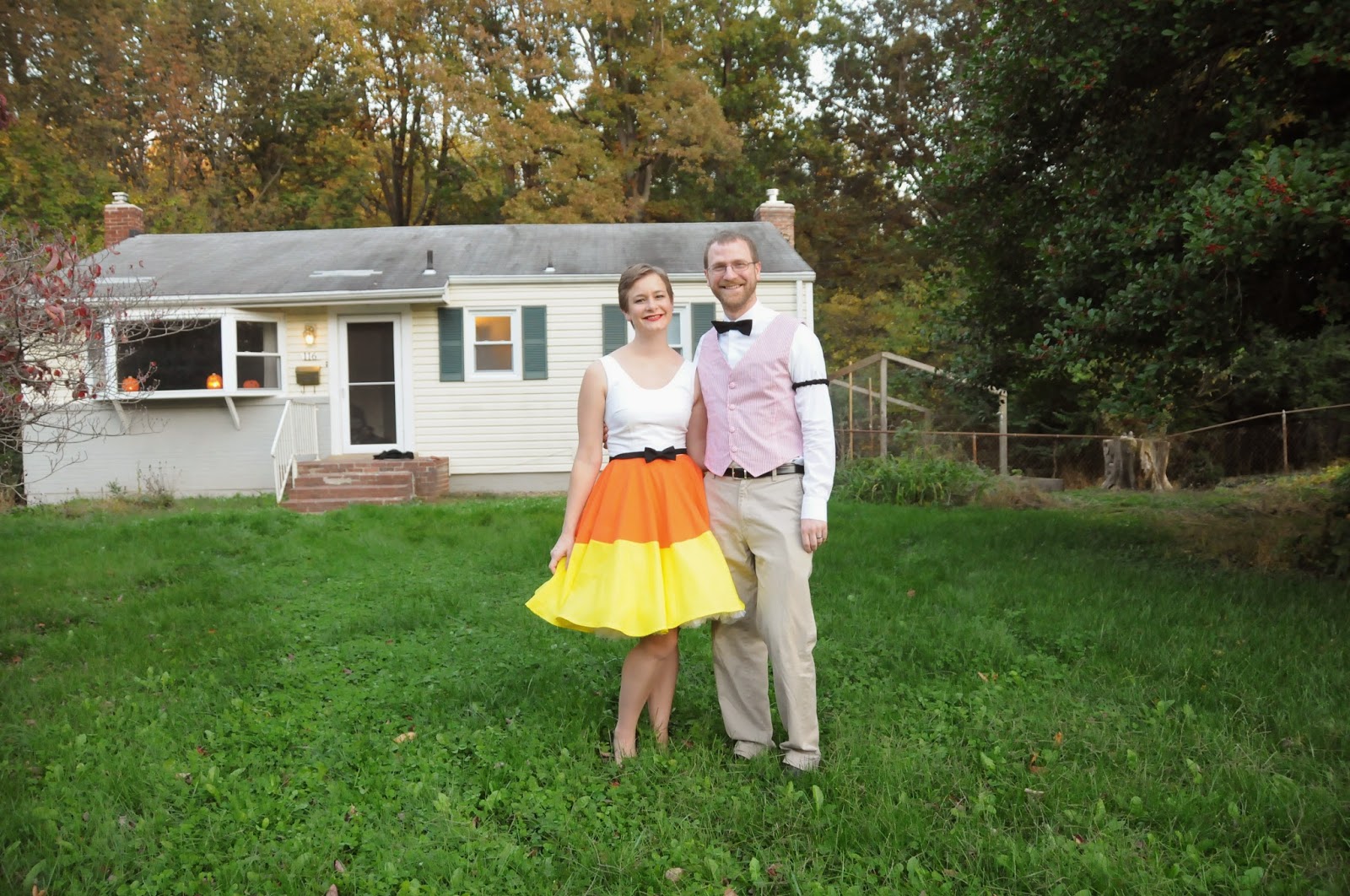 First up? This year's Halloween costume. Greg and I dressed up as a vintagey candy corn and candyman.

I'll post about Greg's candyman costume on Wednesday and my costume from this year's Renaissance Festival on Friday, all in time for Halloween. Sound good? 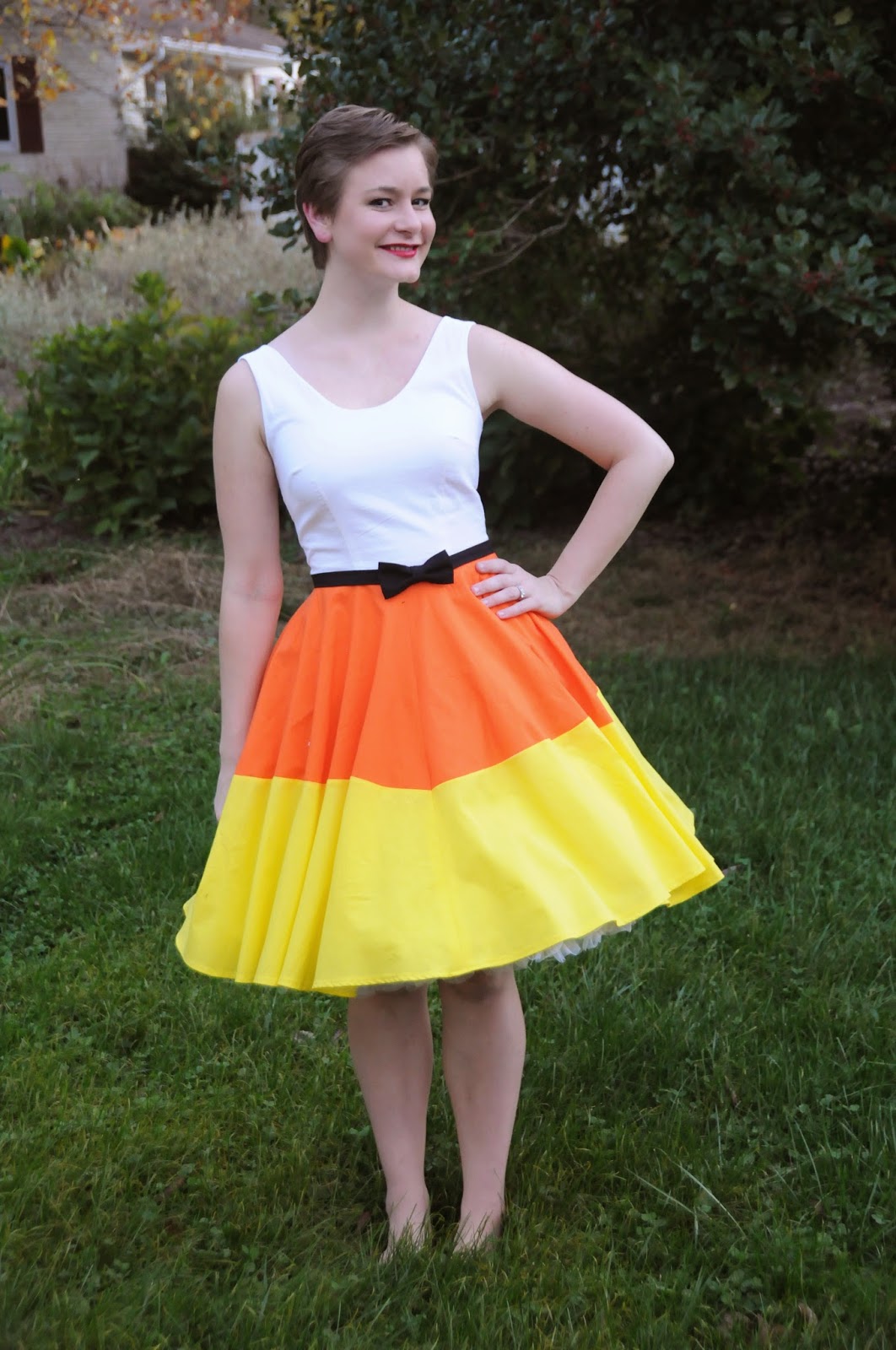 Surprise, surprise. This is yet another version of Butterick B5748. I seriously cannot quit this pattern. 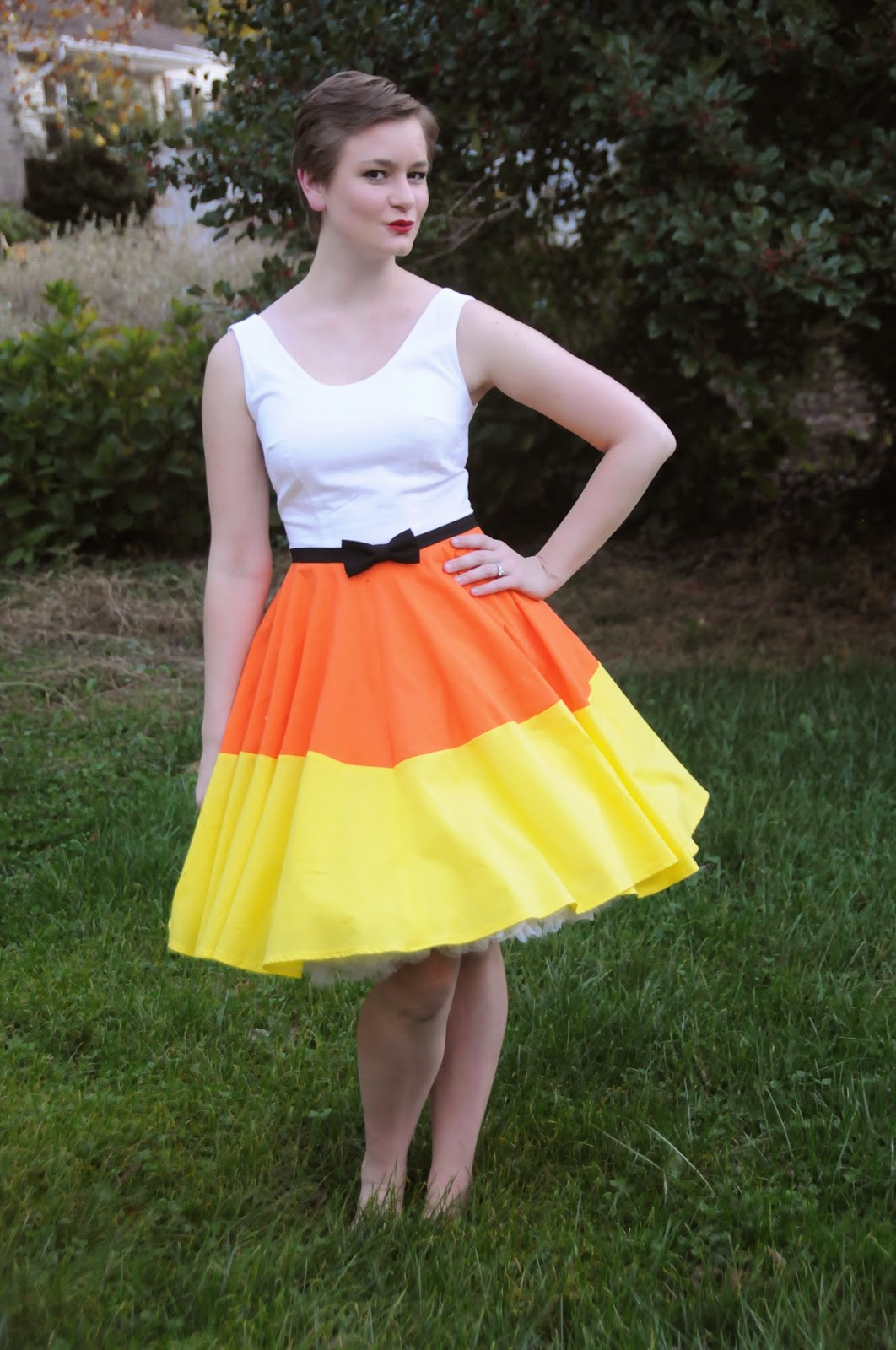 I've worn versions of this dress in two weddings (including my own!) and made a general version from bedsheets -- and I wore it frequently this summer. 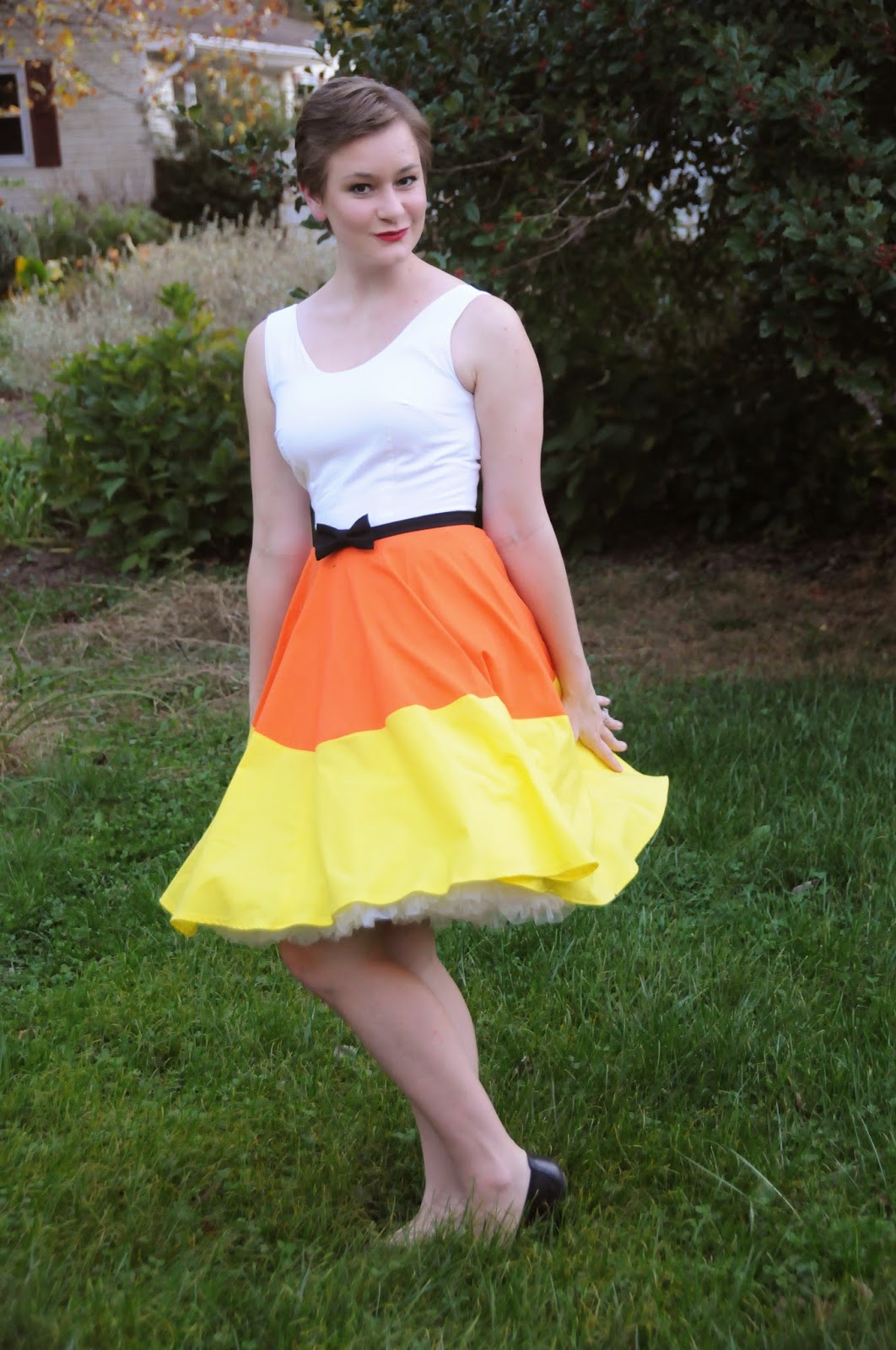 At this point, I can make this pattern in my sleep. 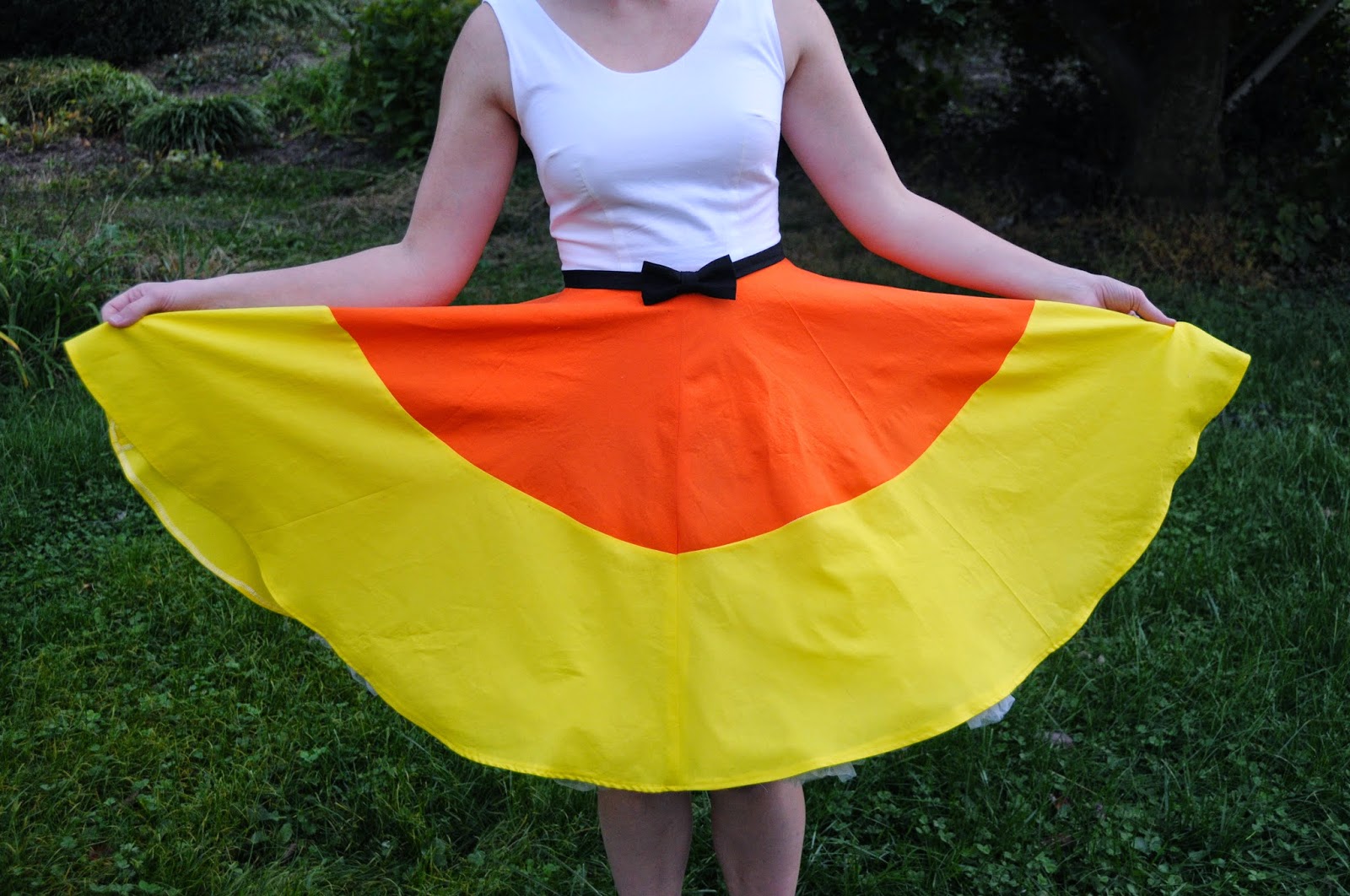 For this version, I took one of the skirt pattern pieces -- since it's a circle skirt, the two pieces are the same, I felt I could sacrifice one of them -- and measured to find it was 25 inches. At 13 inches, I made a mark on each side and the center and eyeballed a curve between them.

Since the skirt is on the long side, I slashed at the curve I drew and didn't add seam allowance, just used the new pieces and sewed them together with a 3/8-inch seam allowance. 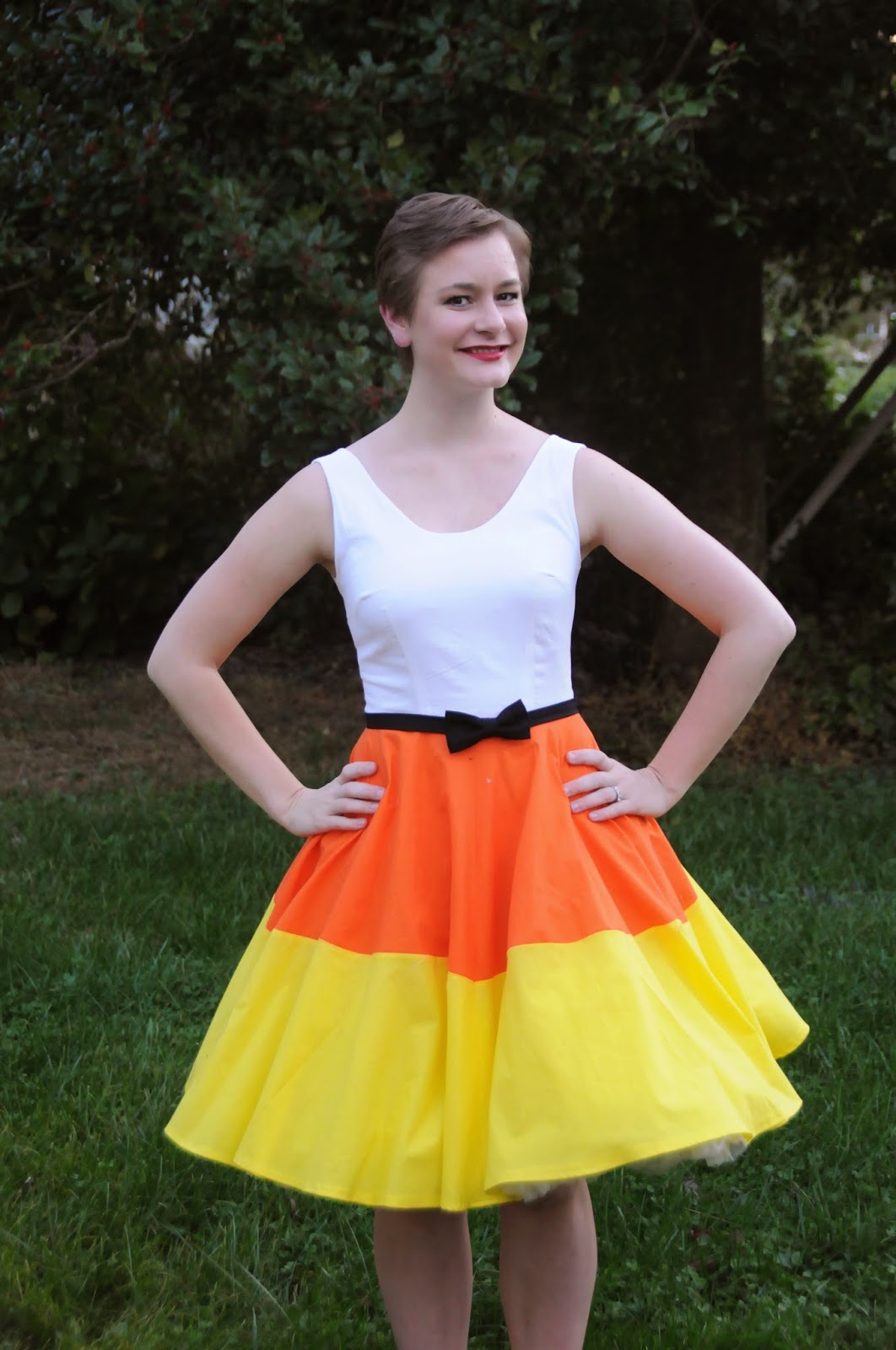 For fabric, I used plain old quilting cotton from JoAnn. Total, for both my costume and Greg's, plus some thread I needed, I came in under $30, despite the fact that I used the nicer, more drapey quilting cotton.

I lined the bodice in self fabric, but didn't bother to line the skirt since I knew I'd be wearing a petticoat. The seam allowances are all serged. 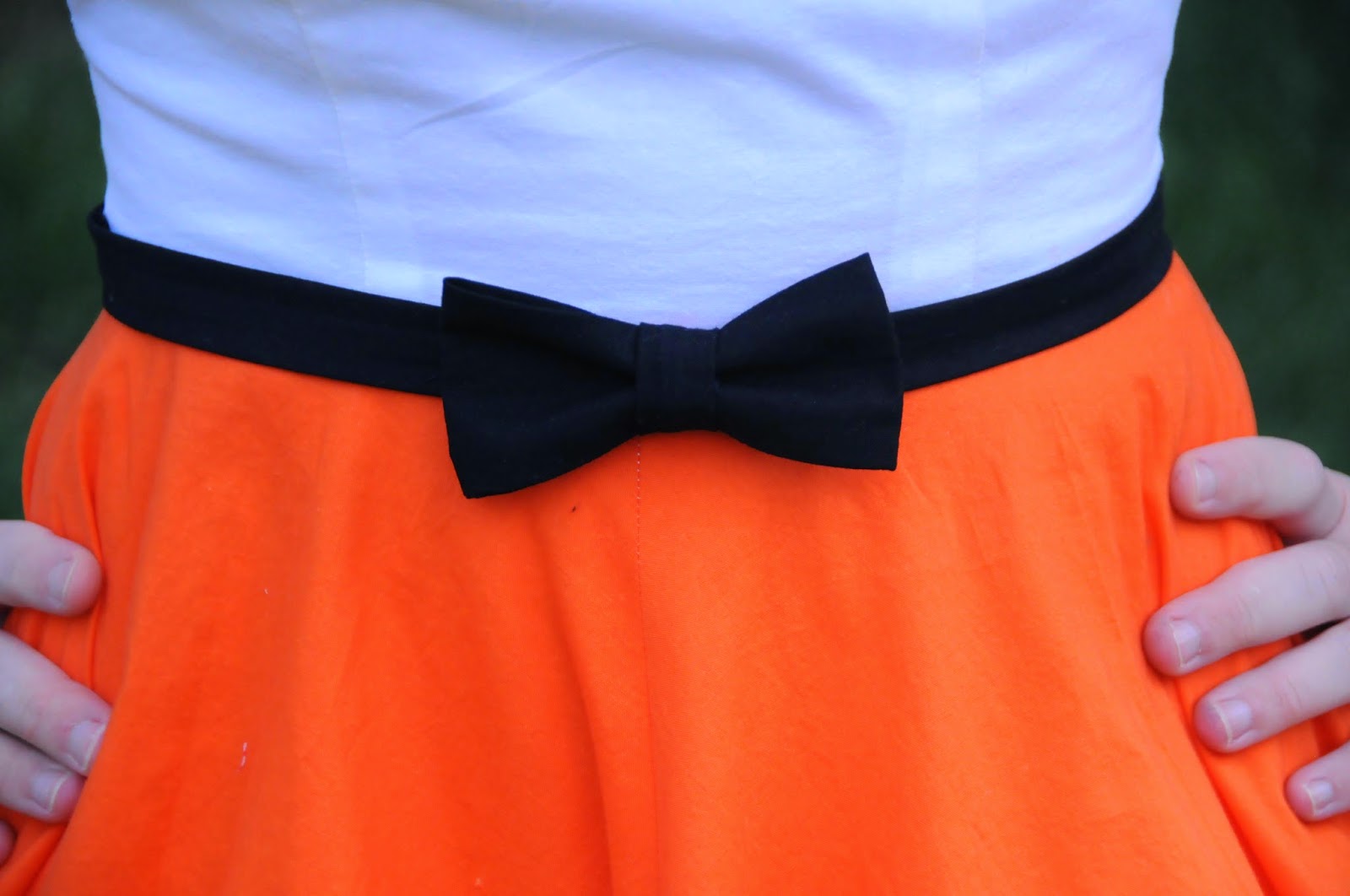 After making Greg's bow tie, I decided to make myself a little bow belt so we'd match a bit better. This is a simple bow, belt and button assembly. 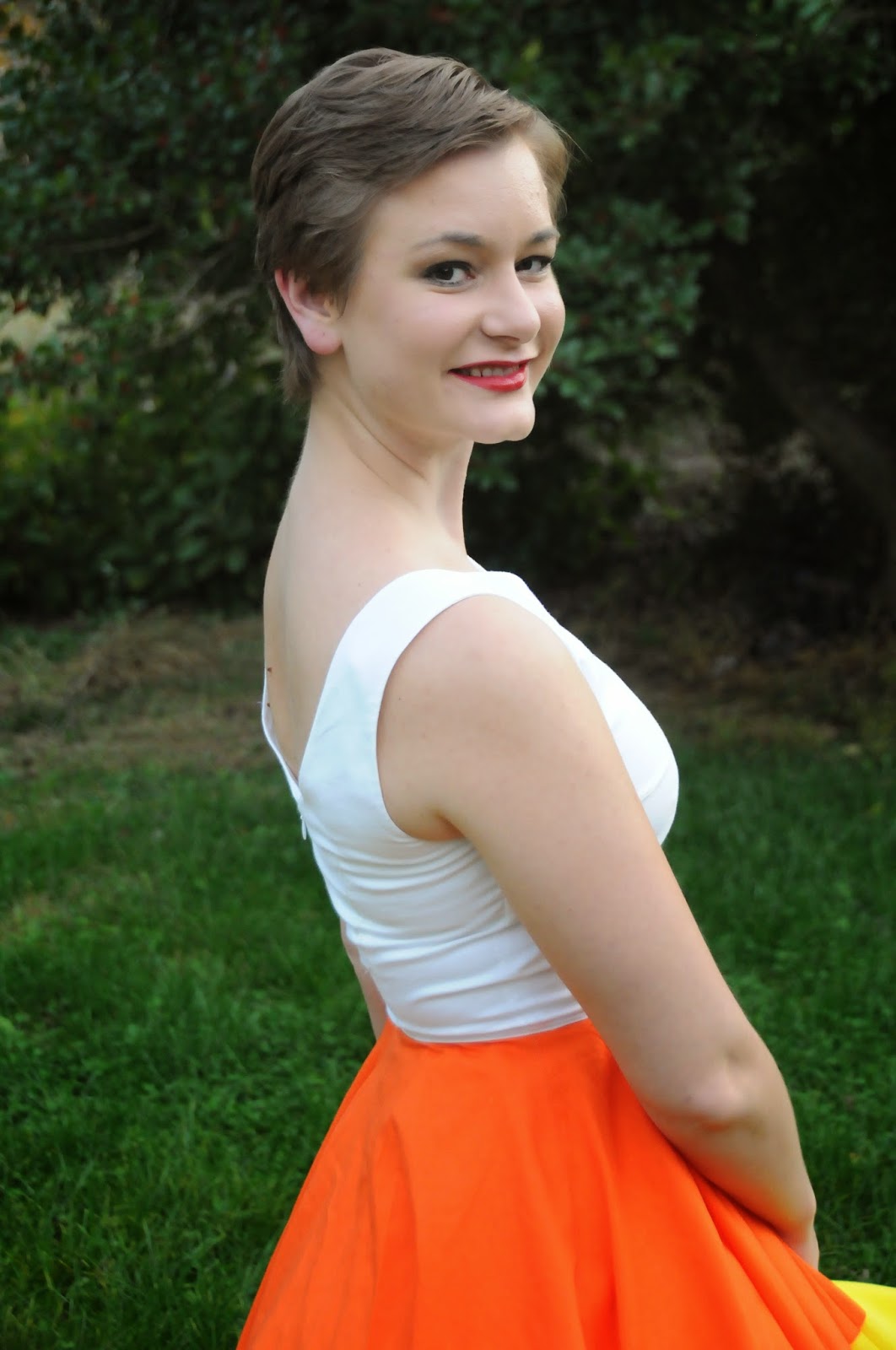 To give myself some floof, I wore one of the petticoat crinolines from my wedding. This is the Modcloth Va Va Voluminous short petticoat in white. The net is soft and it provides a lot of lightweight floof.

Plus, it gave me a more triangular, candy-corn-type shape. 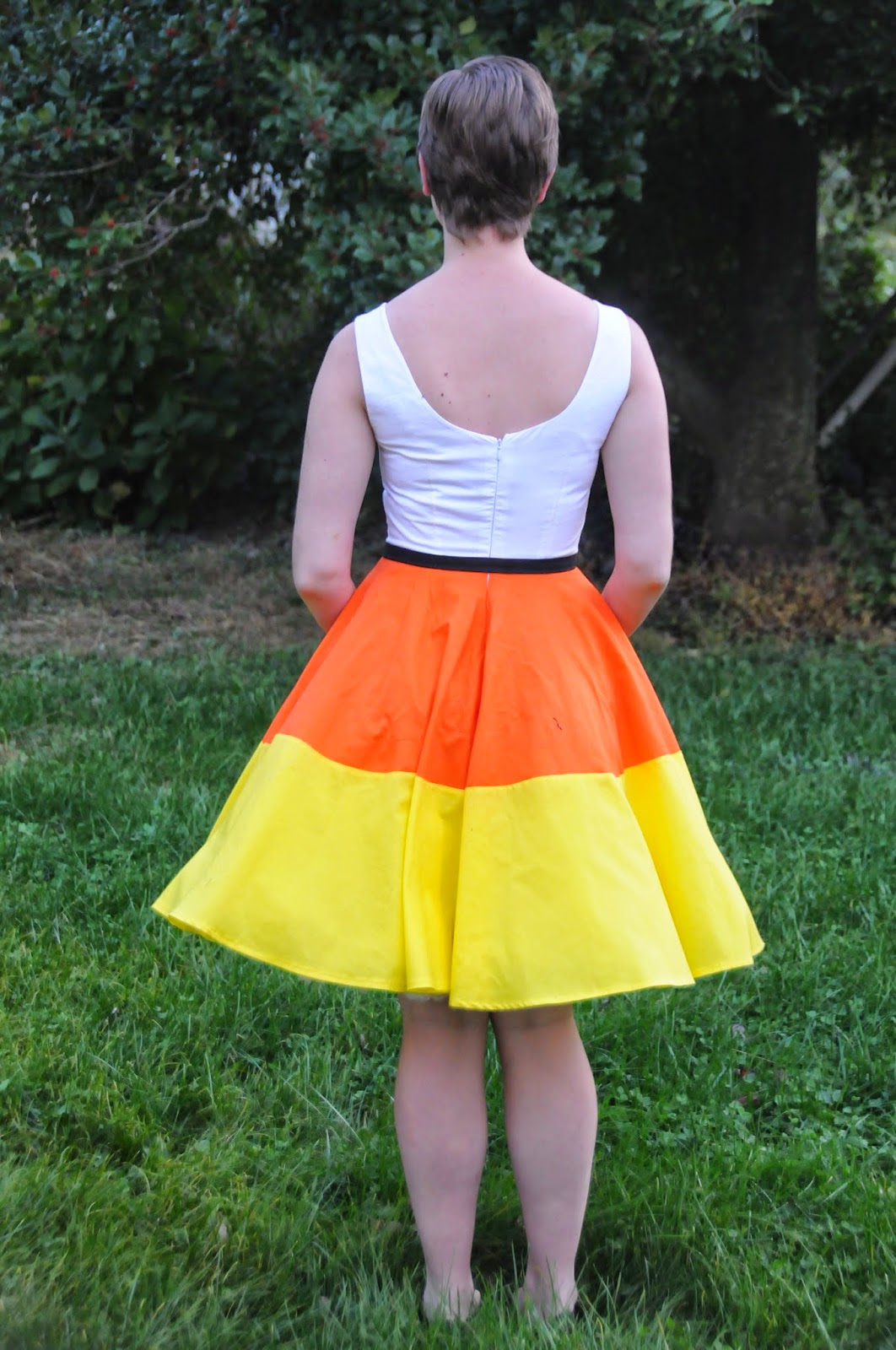 Looking a little wrinkled from the back -- we tried really hard to get good jumping and spinning shots, but it didn't work out, which is why I'm a bit wrinkled in this picture, 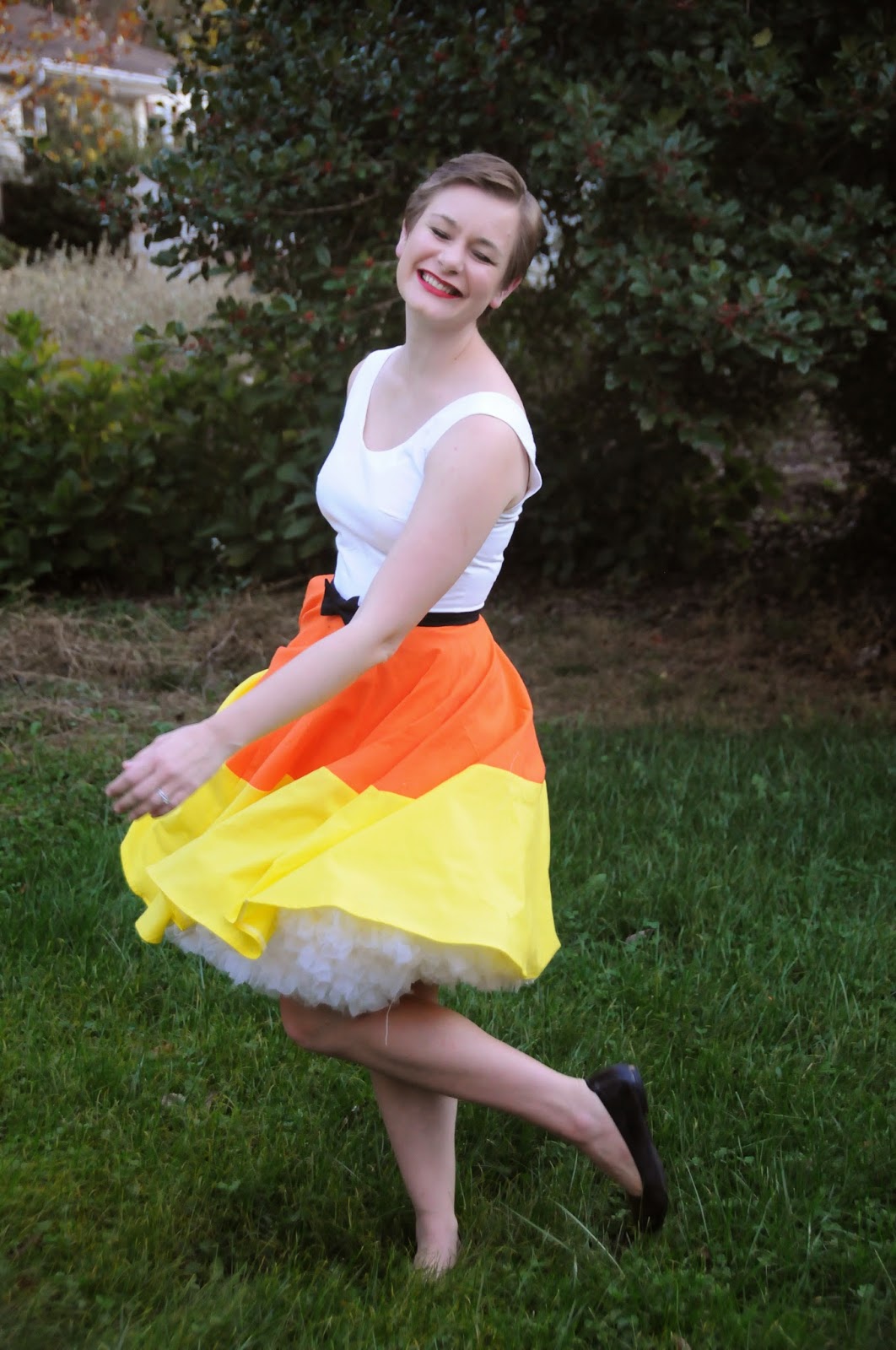 We wore these costumes to the Halloween dance at the local arts center, which is where we take ballroom classes. Not to brag, but we were totally one of the three couples who won the costume contest. ;) We had so much fun! We're new to ballroom, but I am loving the classes. Our teacher is a hoot!

What's your Halloween costume for this year? Got any exciting costume projects coming up?
Posted by Aleksandra Sandstrom at 11:29 PM