When I received the birthday wishlist for one of my favorite little friends, I was tickled to see that he had requested not only clothes, but "a birthday suit."

The list also included such gems as "a gold-colored bike that moves" and "a balloon that has a string." But of course I fixated on that birthday suit.

The Birthday Boy's current Favorite Thing is, of course, balloons, which served as the party's loose theme.

You know where this is going, right? 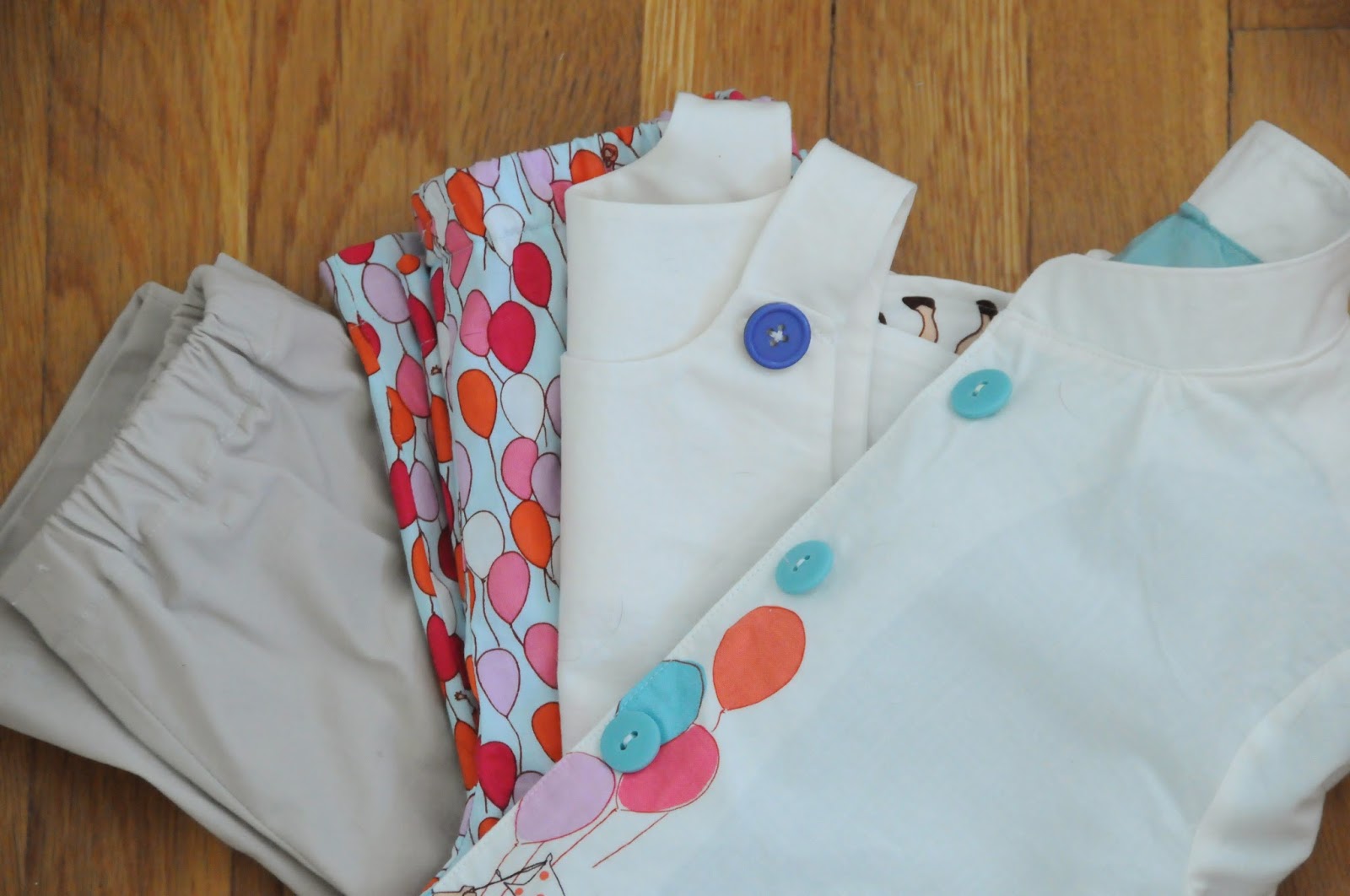 And, of course, a matching dress for his 7-month-old sister, my Goddaughter, who is much adored by her older brother. So much adored, in fact, that he included presents for her on his birthday list. What a generous guy! 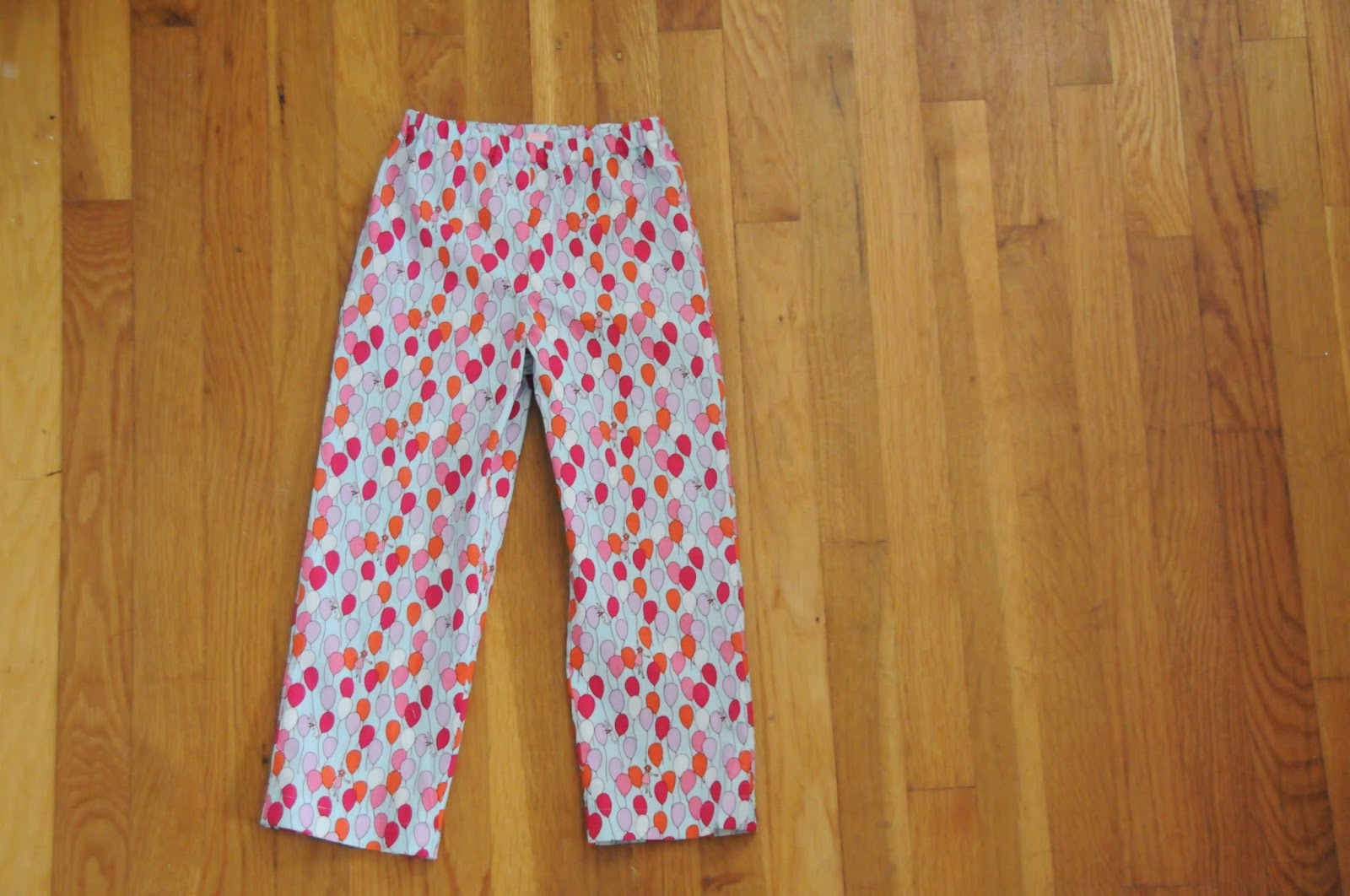 I wasted no time in ordering a pair of Michael Miller balloon fabrics from fabric.com. These are quilting cottons, which mean they are easily washable (always a relief, I imagine, for parents.)

I also got some turquoise rayon Bemberg from Hart's Fabric. The buttons were a guessed match at fabric.com, but I think they turned out to be fairly close to the turquoise balloons on the fabric. 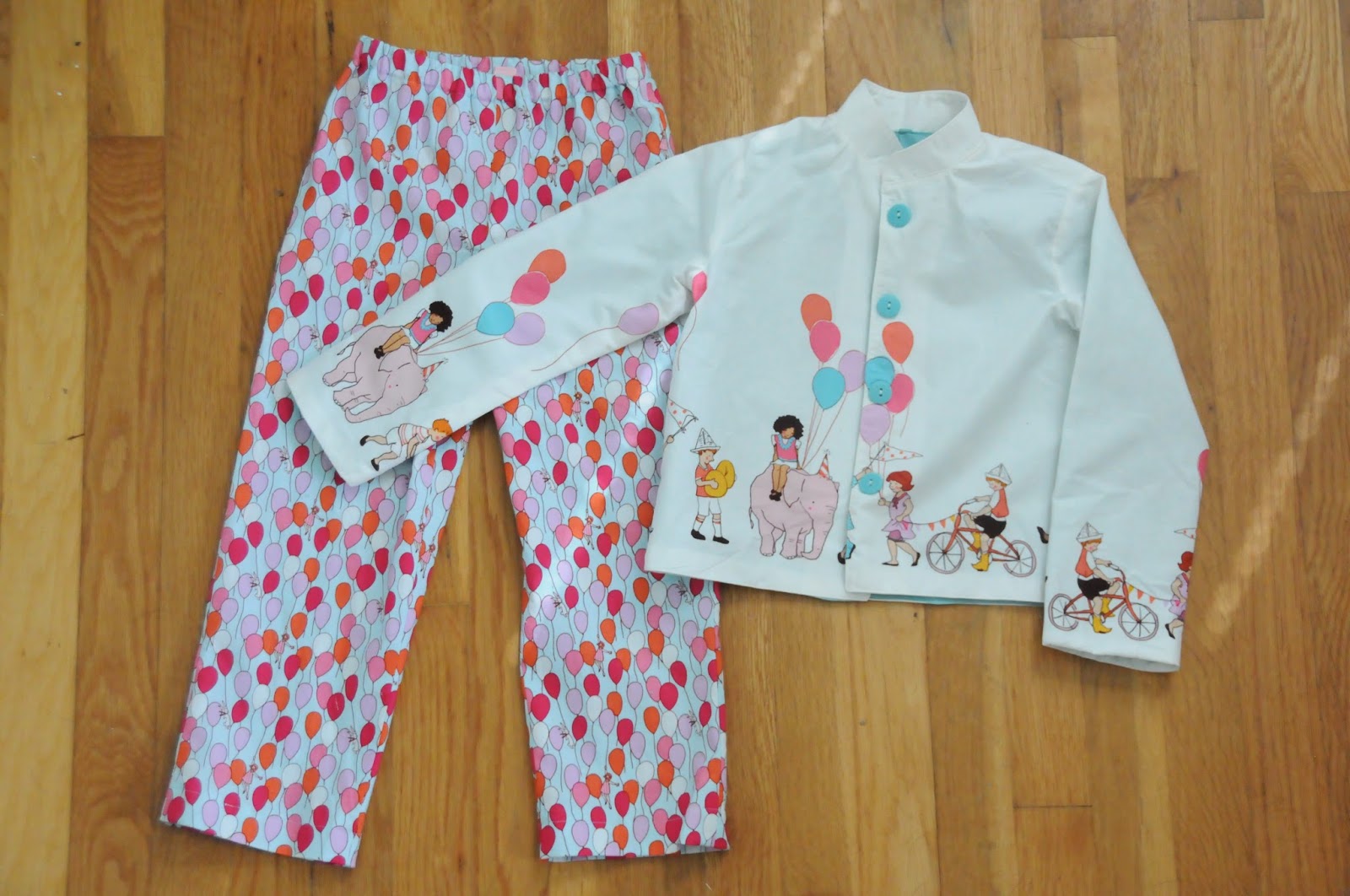 The pattern I used was New Look 6257, which includes pants, a mandarin collar jacket, a vest and a dress pattern.

Yes, this outfit is possibly a bit clownish and maybe even a bit girly. But Birthday Boy's parents are about as interested in gender norms as vegetarians are in meat -- and if you can't wear crazy clothes when you're 4, when can you wear them? 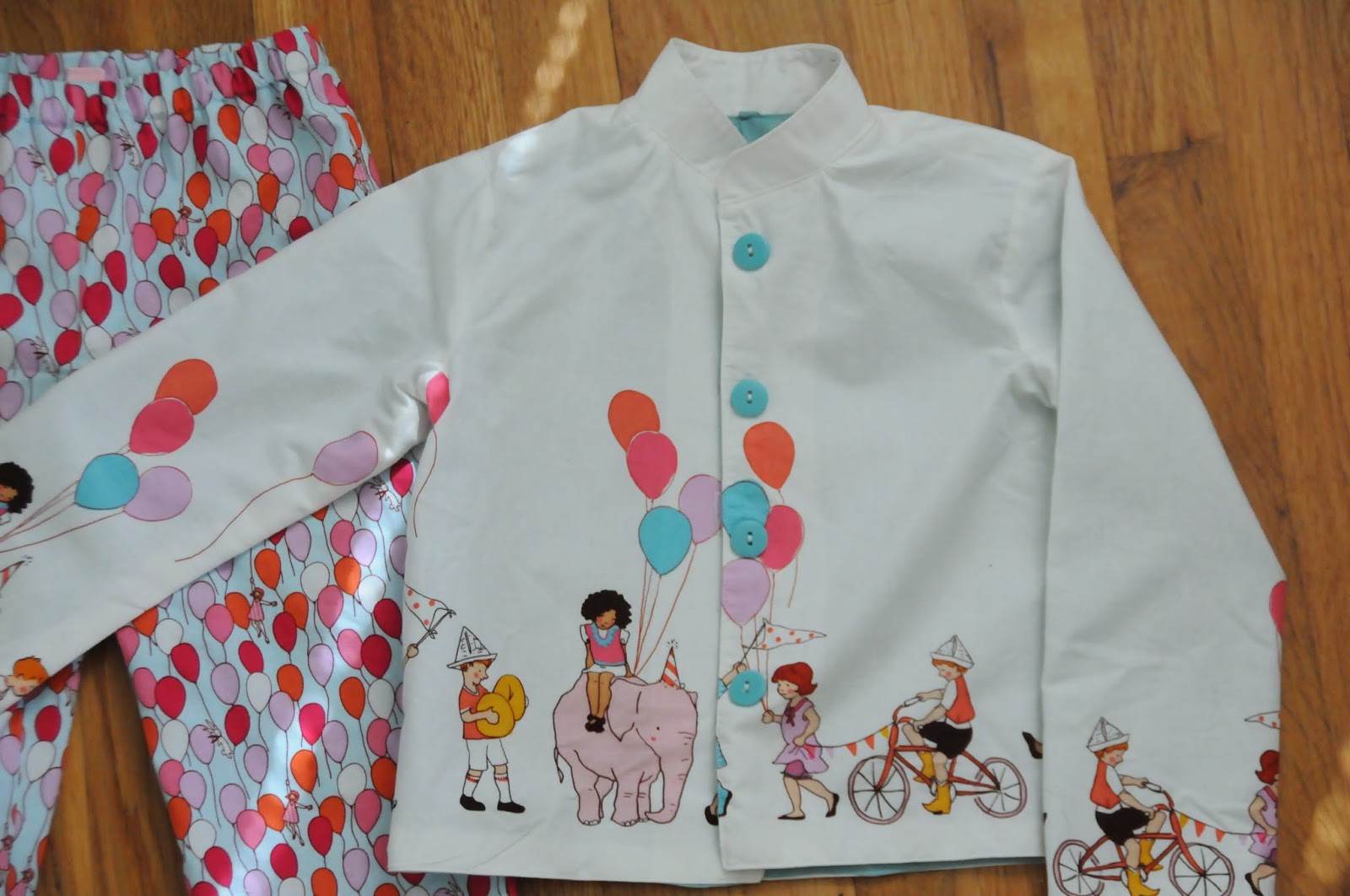 One of BB's grandmas was kind enough to measure him for me. He's a bit small for the size 3 (which was the smallest one in the pattern), but I needed to cut an extra inch or so to account for his height.

The pants have an elastic waist. I cut the elastic exactly to his waist measurement in the hope that even if the pants were big on the leg, they'd fit in the waist.

It turned out I didn't need to worry -- the pants fit fairly well! 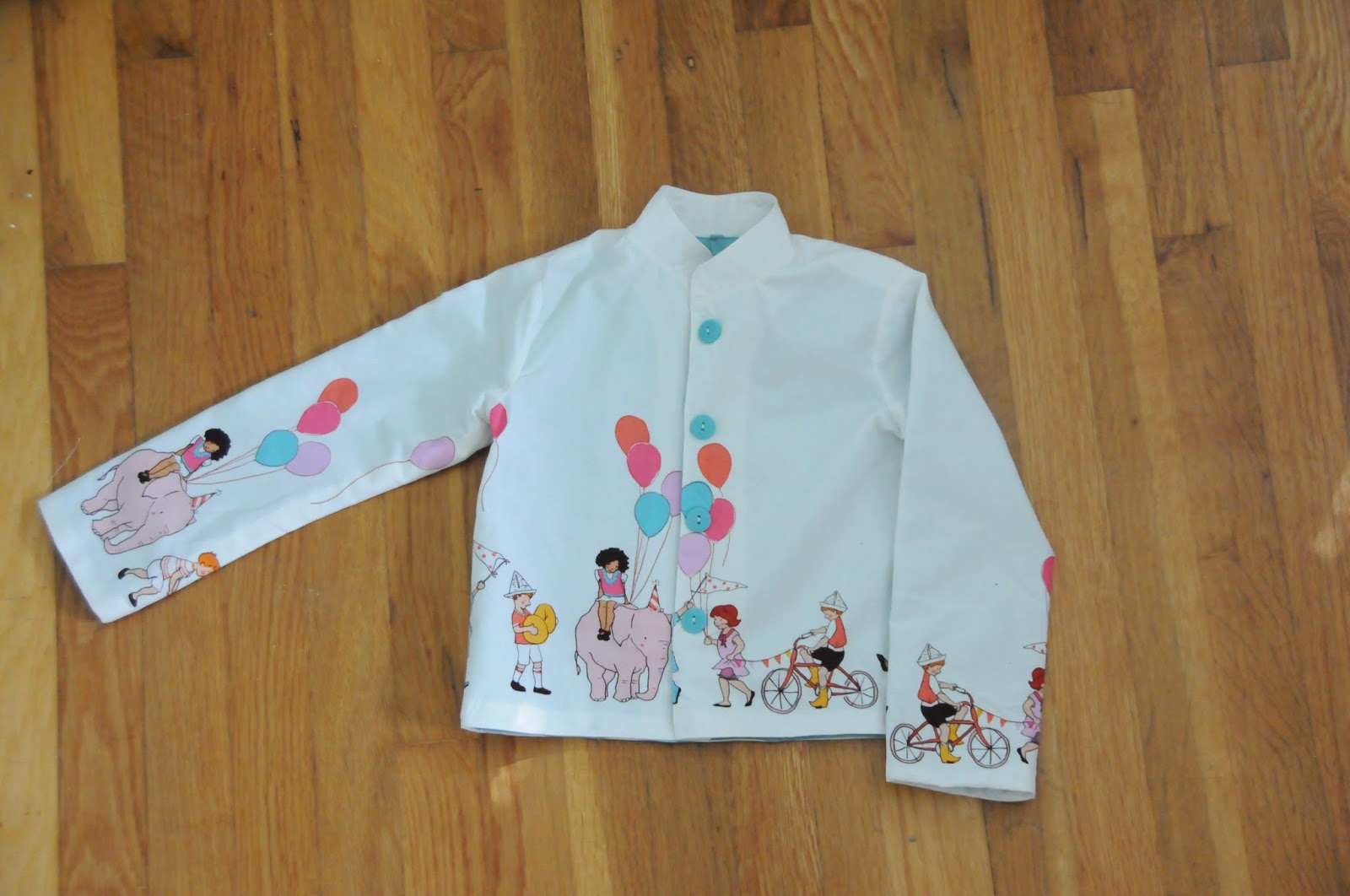 The jacket was pretty easy to assemble -- more so because it had only a mandarin collar and didn't require a full on collar or lapel scheme. I used cuff and collar interfacing from Fashion Sewing Supply to interface the collar. The button edge is interfaced with light fusible, also from FSS. 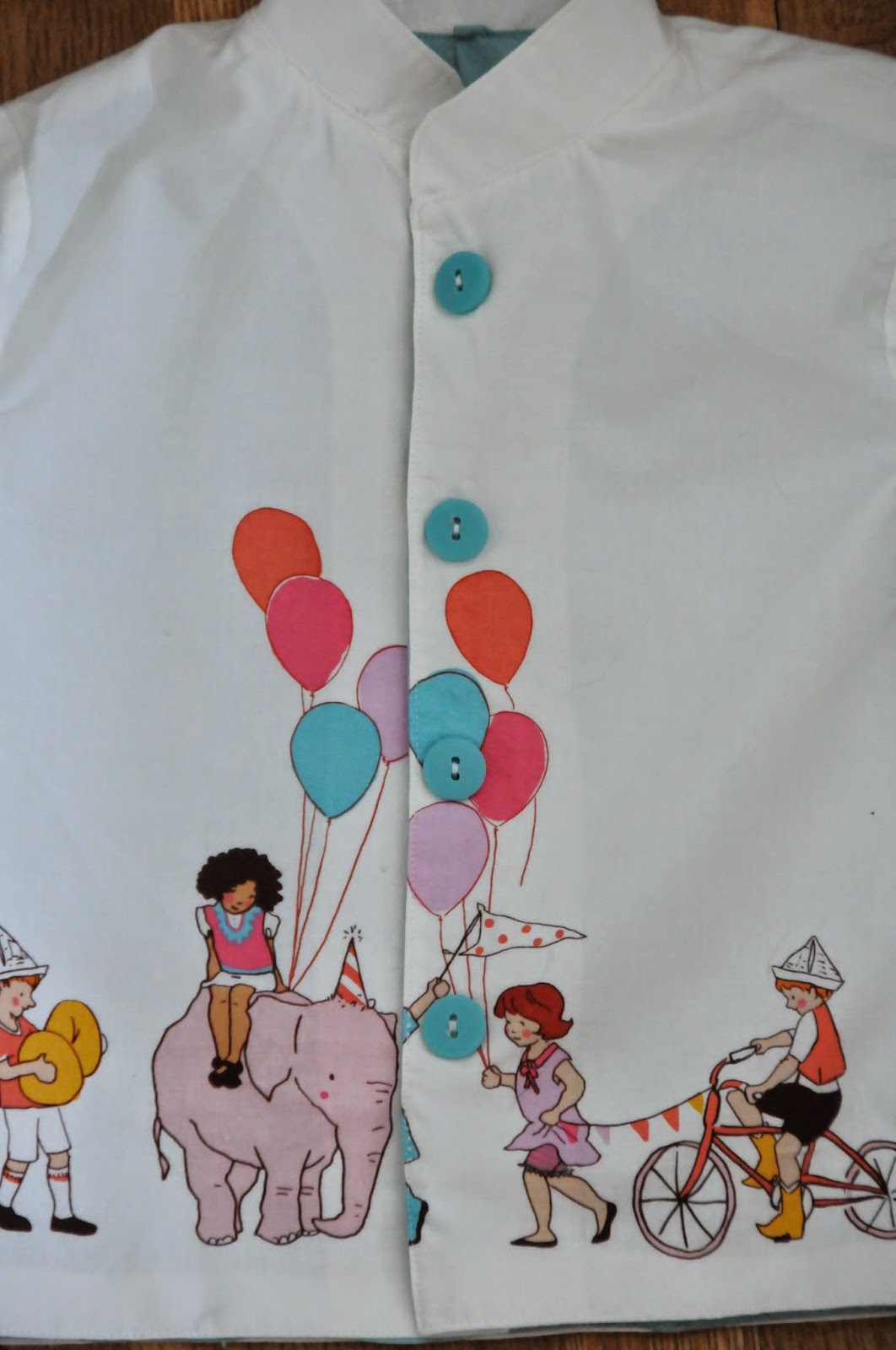 The pattern was fairly difficult to match because of the scale of the repeat, but I managed to get some climbing balloons onto the button area.

I also got to work on my technique for bagging linings, which was nice. I have a new winter coat planned and, silly as it may sound, I feel much more confident about the lining now that I've accomplished it on the small scale. 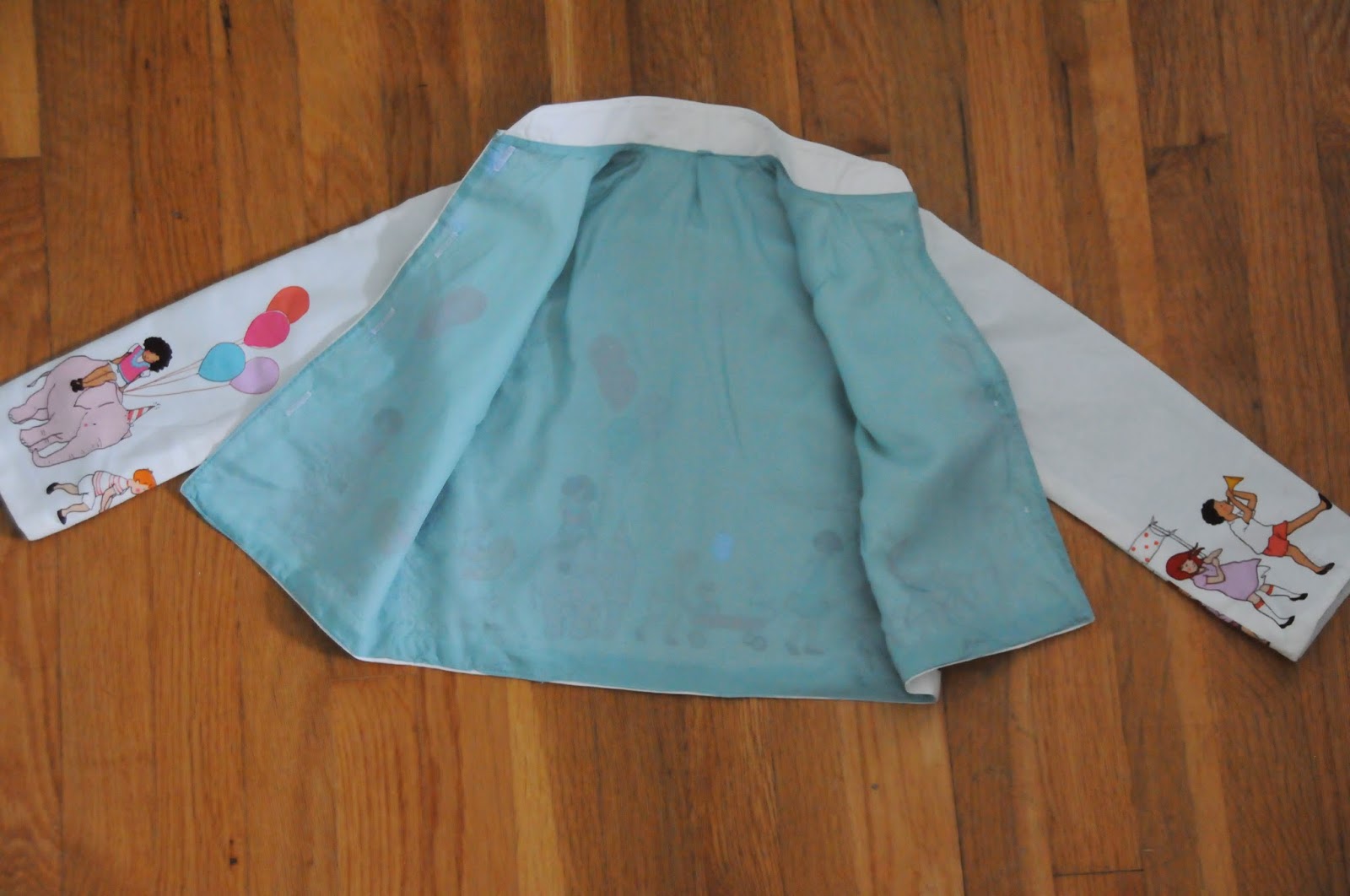 I love rayon Bemberg for lining -- it feels so luxurious! 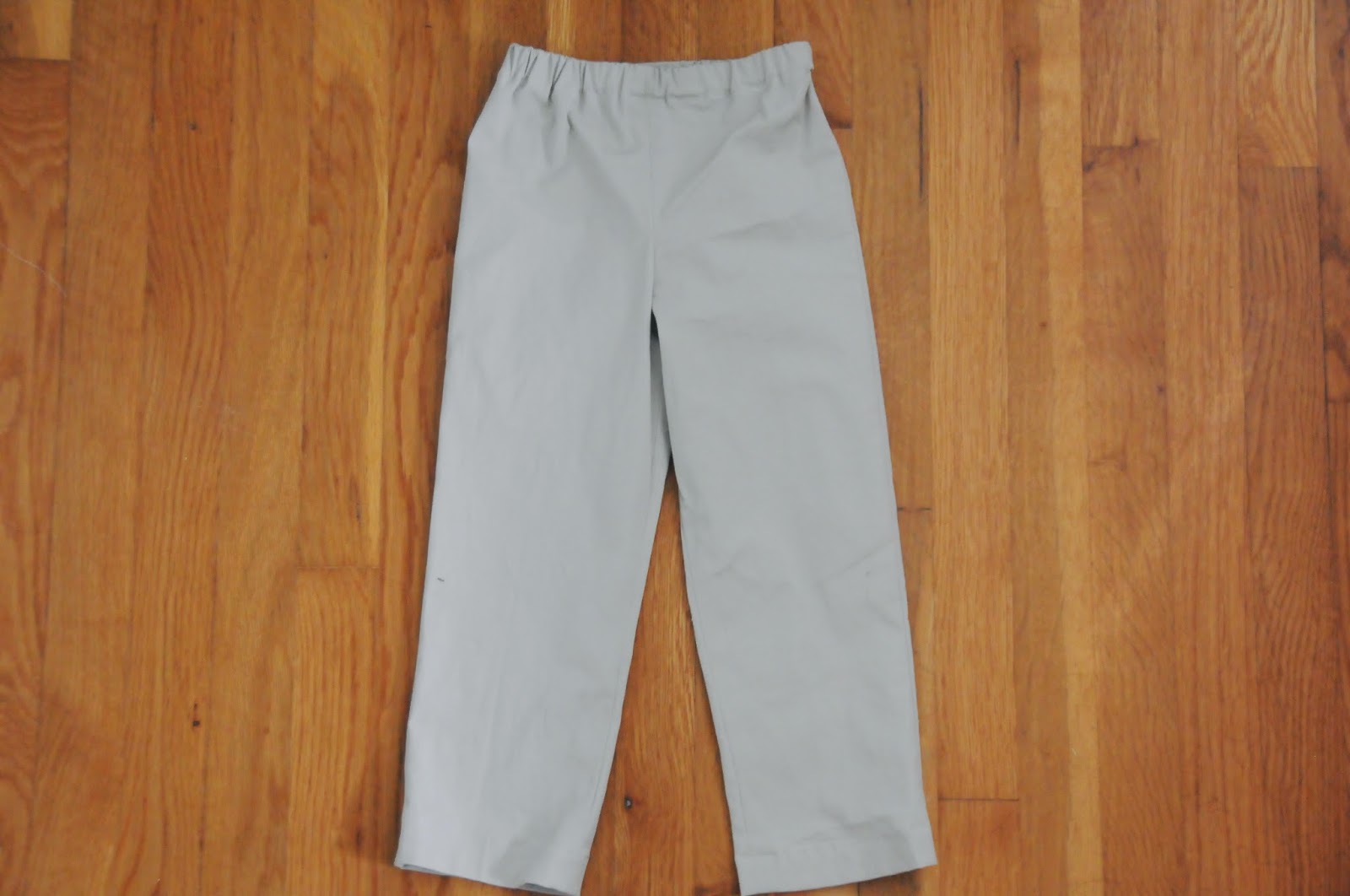 At the last minute, I decided to make another pair of pants from a slightly stretchy khaki I have in my stash. These pants use so little fabric that I think I can still get a skirt out of the yard-plus of khaki I have left.

You can't really see it in these pictures, but I realized as I was pressing everything that I could not tell the back from the front of these, so I sewed a small grosgrain ribbon tag into the back of both pairs of pants. It's hard enough to dress a preschooler -- who would want to do it twice because the pants went on backward the first time?

All in all, I'd say the balloon suit was a hit. BB wasn't too impressed at first, but then his mom asked him what was on the pants and you could see his eyes light up when he took a look and proclaimed them to be "BLOONS!"

And so he put it on, in the middle of the living room, right then and there, in front of all the guests. (Who were mostly all family, but it was still amusing.) 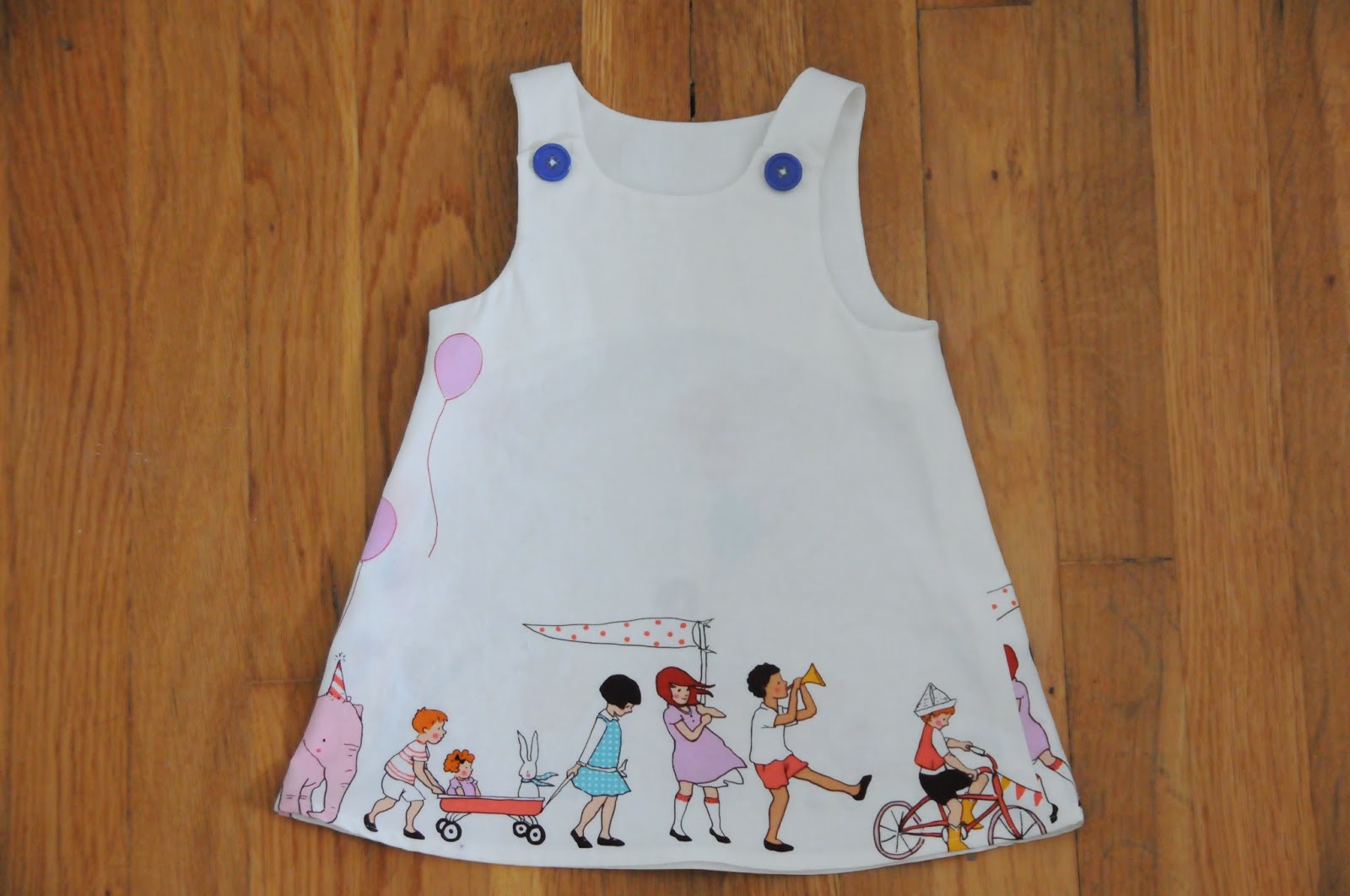 Of course, it's difficult to resist making little girl clothes, so I made a matching dress for BB's sister.

This is New Look 6576, made up in size small. It's got shoulder buttons to make it easy to take on and off. I imagined it would be cute for the end of summer -- it's finally getting hot where I live -- just to wear over her diaper. Probably a shirt and tights could go under it, too, though its a very summery fabric.

I broke the first button I tried to sew on -- hit it with the needle and snapped it in half, so she got some random buttons I found in my stash that were the same size since I had exactly six of the turquoise buttons. I'd already made the buttonholes, so we were pretty much stuck with these, but I do think the purple looks nice. 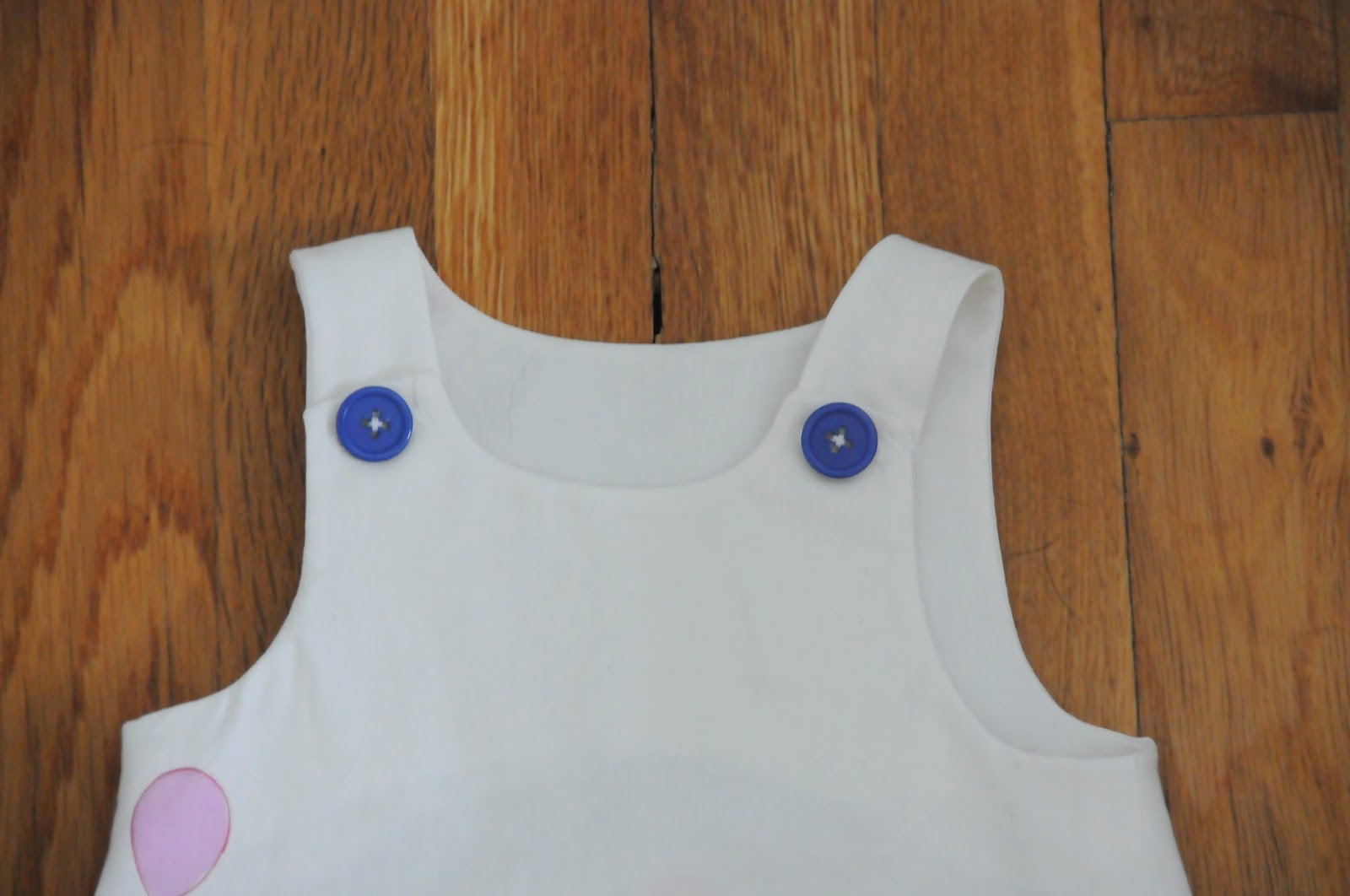 I never got measurements for this, so I just eyeballed based on the pattern paper -- a dangerous proposition -- but it worked out and fit perfectly.

I've been absent from the blog a bit lately because I've been tackling a huge project for a dear friend's wedding, so it was nice to take a little break and do some fun kid sewing. Both of these projects were easy to turn out and very very quick. The pants each took about 45 minutes from cutting to finishing, as did the dress. The jacket took a bit longer, maybe a couple of hours. 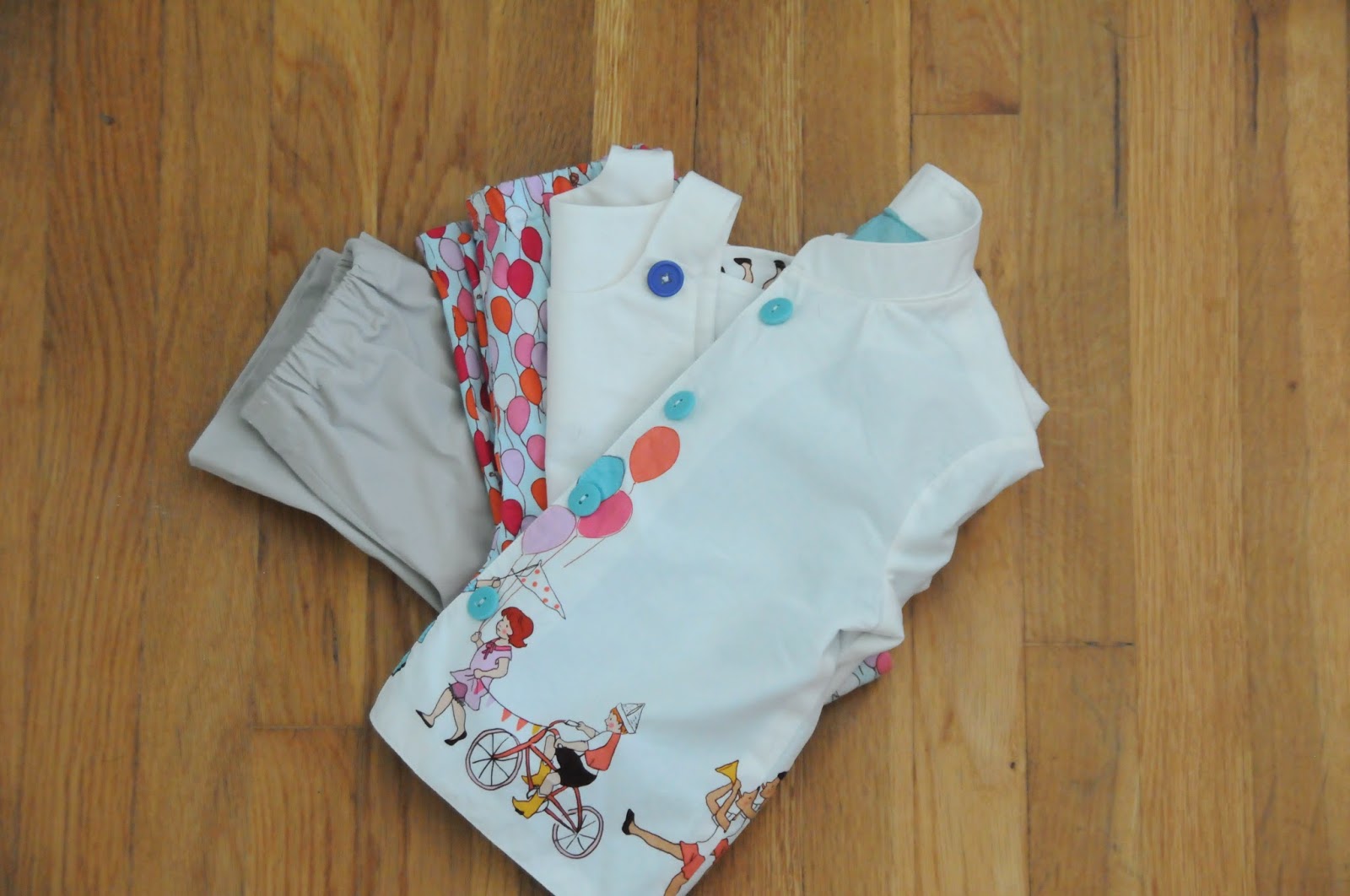 Do you all sew for others? I enjoy it -- as long as the expectations aren't too high. This was a nice, low-stress project. Like a little sewing vacation!
Posted by Aleksandra Sandstrom at 12:04 AM