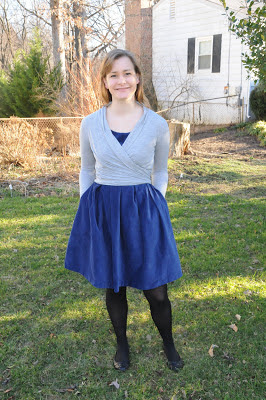 Butterick Patterns are a cruel mistress. This is my second Butterick with major fit issues. You'd think I would have learned from the first dress, but that would be asking too much, I think.

I have now learned that I absolutely MUST look at the finished measurements on the pattern for Butterick patterns. Holy ease.

Like the grey dress, I had to take this one in a ton.

I think I got too comfortable making all of those New Look tops with their perfect fit right out of the envelope and outsmarted myself.

And of course I didn't make a muslin.

Basically I made every mistake ever and the neckline is still a bit wonky.

But I find myself not caring overmuch.

Originally, I intended this dress to wear as a jumper over a button-down blouse. But it looked horrific like that. Really bad. I looked like some sort of schoolmarm from yesteryear.

Happily, I like it a LOT with my RTW wrap sweater. I think I bought it four years ago at Target -- it was definitely when I was in grad school, anyway.

Here's a sweater-less version, front and back: 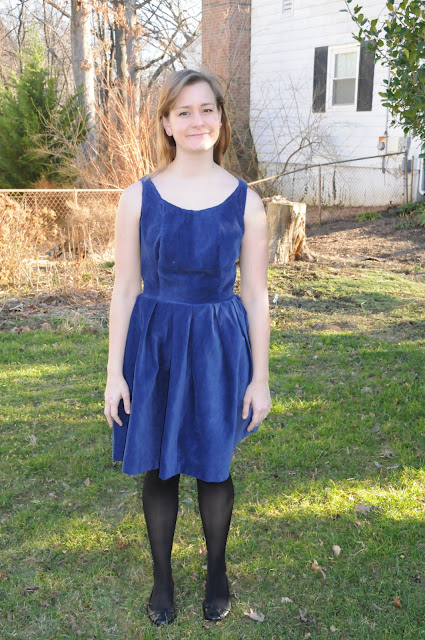 Instead of darts, the dress has, I think, princess seams? I'm not sure if there are enough of them to be defined as princess seams (my princess-seam leotard back in the day had a seam down the center front as well). The curved seams were a bit of a challenge to sew, but using my mom's new fancy machine, it went fairly well. I started this project on my old machine and it was NOT a fan of my attempts to slowly sew around the curved seam. (It wasn't really a fan of doing anything slowly, let's be honest here.) 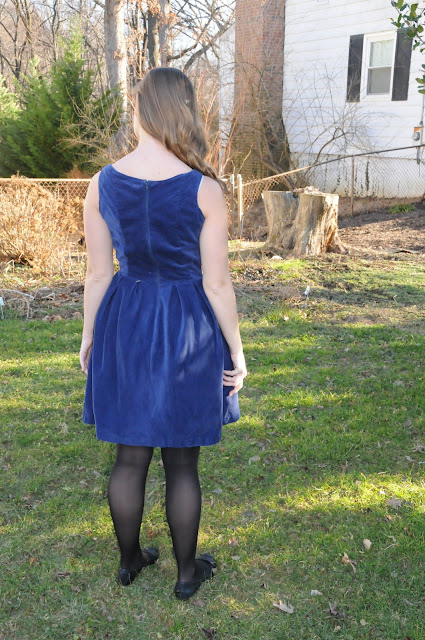 I made this out of corduroy with no wales. So basically it's like cotton velvet. The lining is silver-grey bemberg rayon. It's so nice and warm, but it's not super heavy, either.

The major bonus of this dress, besides the flattering cut for those pear-shaped among us, is pockets! These were my first pockets and I was super excited about them. I adore pockets. My hands are cold 98 percent of the time and I like to carry pens around with me at work. 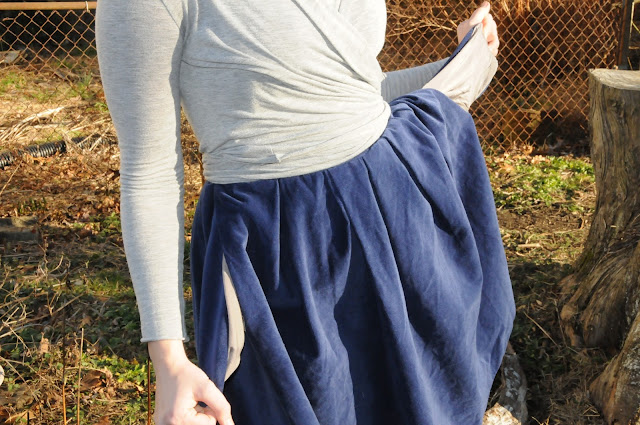 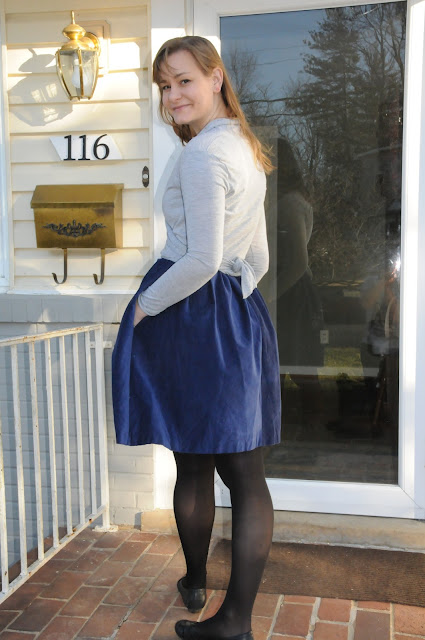 Don't you just love my earrings? They're from Etsy. I fell in love with a similar pair on Modcloth, and then found the Etsy ones for half the price. Pretty sweet when that works out, right? They're little molded pink roses. 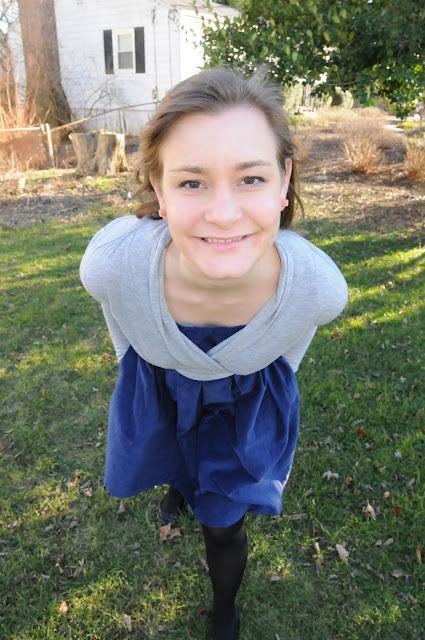 Up close of the wonky neckline that I had to unpick several times. This, I think, is as good as it's going to get without me cutting new lining. Um, no. I'm too lazy to make a muslin. You think I'm going to redo the lining? 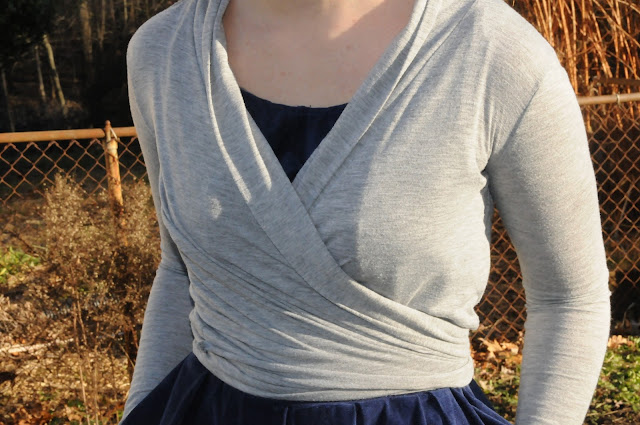 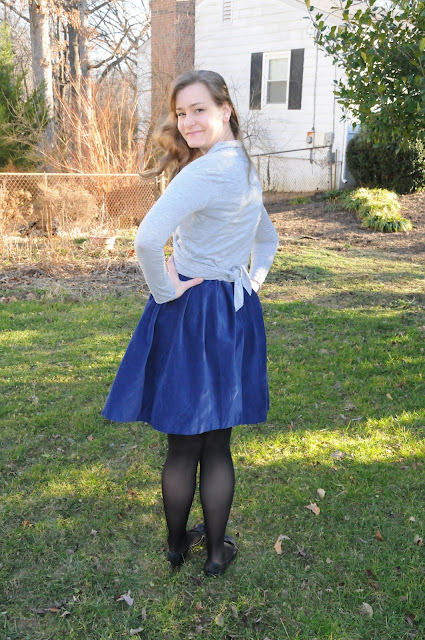 Now that I'm a little better versed in sergerland, I think I might remake this wrap top. Do a similar wrap but make it a mock wrap so I don't have that annoying knot in the back. 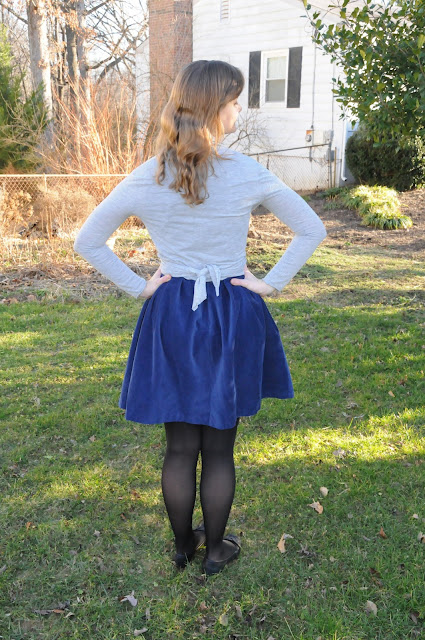 Overall, I feel pretty smug. I got a compliment from a coworker who doesn't even know I sew. This is my smug look: 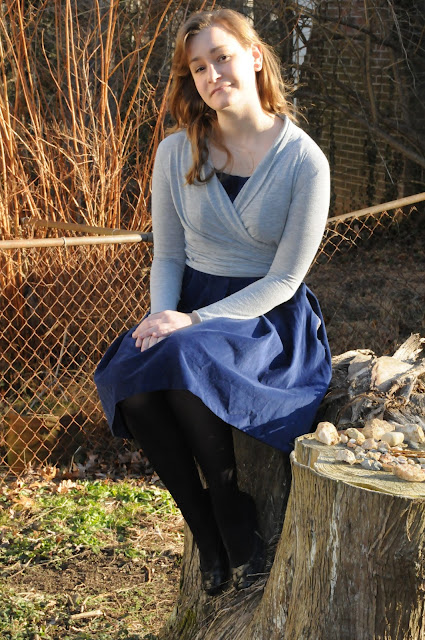 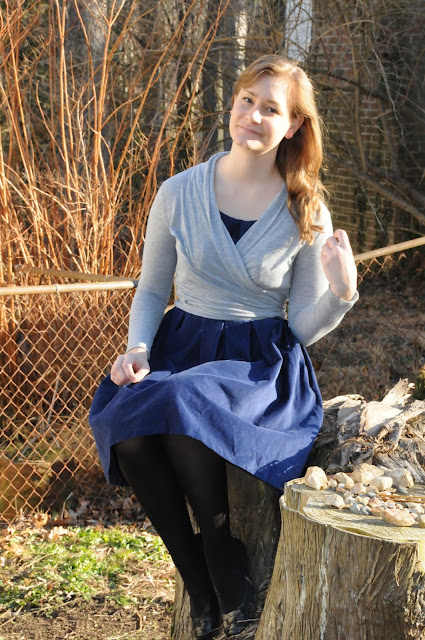 If you're interested, you can check out my thoughts on this pattern on Pattern Review.

Posted by Aleksandra Sandstrom at 3:24 PM